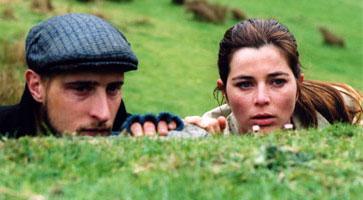 After watching no-budget horror films for review purposes over the last month I have come to a few inescapable conclusions. Foremost is that these filmmakers are dreamers, inspired by love and committed beyond most to seeing their dreams through to completion. Fast on the heels of this comes the second realization, that not everyone’s dreams are interesting. I have also learned that while I truly admire the pocket purse Polanski's of the horror world I cannot force myself to forget the painfully learned lessons of film school.

Some of those lessons include: If you have to cut the dialog scene at a frenetic pace in hopes that the audience will overlook the poor dialog and bad acting, just cut the scene out. Music can help a lot of ineffective scenes move towards adequate…But bad music will cut the throat of even a well constructed set-piece (See “Five Across the Eyes”). If your lead can’t act but will get naked, eliminate 75% of her/his dialog. If your lead can’t act and won’t get naked, postpone and negotiate, recast, cancel or just hire a stripper. If your lead can’t act and you didn’t write in a nude scene, expect that people might be angry. But perhaps the biggest lesson is that if you are trying to entertain, you must keep the audience from asking the “deadly” questions. Some of these questions will follow shortly.

“Dead Meat” begins when a vacationing couple, Helena and Martin, accidentally run down a pedestrian on an Irish country road. Miles from any town they decide to put the dead man into their car and seek help. But before they can get started, the corpse (say it with me) comes to life and bites Martin on the neck.

Helena runs for help but is immediately beset by hordes of shamrock dead. She fights her way out of an infested farmhouse and meets up with Desmond. He is a local boy who informs her that the inexplicable happenings are actually the result of (say it with me) Bovine Spongiform Encephalopathy, or um... Mad Cow disease.

The two decide to make for Desmond’s farm some 5 miles away. En route, they encounter one zombie riddled locality after the next and much skull-cracking ensues. The pair also takes on a young girl and hitches a ride with a salty Cricket coach and his sour-faced wife. This not-so-merry band forms a new plan and decides to fight their way to a government rendezvous point.

“Dead Meat” does have some pluck to it. It’s not going to fool you into thinking you are watching the Blind Dead series or “The Living Dead at the Manchester Morgue”, but during its best moments the shots of Irish countryside and the abandoned castle backdrops do call to mind some of the seminal euro-zombie outings of the past. The pluck doesn’t stop there. There are a number of well imagined deaths and easily the single best stalking cow sequence this horror fan has ever seen. Unless you count the monster in Billy O’Brien’s “Isolation” as a cow; in that case, this isn’t even the best Irish stalking cow sequence I have ever seen.

Still, for all the fun that is present “Dead Meat” feels like a few very good ideas and set-pieces spliced into a directionless plot. The endpoint is particularly unsatisfying and plays like zombie movie ending version 1b. Part of the problem is that Marian Araujo (Helena) achieves a level of bland so non-descript that every close-up seems like it was shot during a meal break. Had she been able to rise to an Elizabeth Berkley caliber of bad there would have been a distraction from the first deadly question, “Wait, why do I care?”

The other solution to drawing attention away from a thin plot is a constant bombardment of jokes, gore and nudity. In a film like this one, even with the benefits of better performances, it still may have been the best choice. This is because “Dead Meat” spends so much of it’s time mimicking camera moves from “Evil Dead” that it becomes very difficult not to utter a second deadly question. “Wait, why am I not watching ‘Evil Dead’”?

As I mentioned before, “Dead Meat” has some cool ideas and jokes. A field of zombies chewing their cud and sleeping standing up and wicked cricket ball cow-killing are certainly highlights. But as I lay in bed watching the castle siege finale, my wife without even looking from up from the pages of “Confessions of a Shopaholic” said,

In fact, it had only been about 7 minutes of hacking but the stage had been set for me to ask the third and perhaps deadliest question of them all. “How long is this thing?”

This is the question that prevents me from recommending “Dead Meat,” even to zombie lovers. These days with so many choices in the independent realm, the last thing a zombie film can afford to be is ponderous. Derivative is an unfortunate expectation, but being bogged down by areas that should be strengths, not okay. Headshots and brainings are fun but they still need to be inventive (see "Dead Alive") or woven into a good story structure. After some good moments around its midpoint, “Dead Meat” wraps up listlessly without any of the flare and humor it needed to help it be memorable.