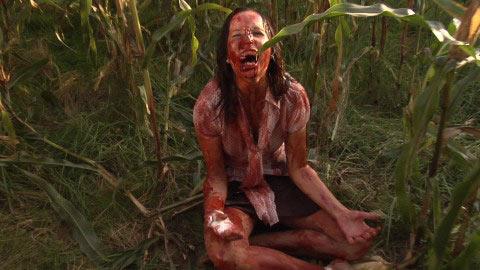 There are a few things one must consider before sitting down with the tasteless motion pictures of German gore-meister and frequent Uwe Boll collaborator Olaf Ittenbach. First of all, the acting is always atrocious, almost to the point of unbearable physical discomfort. Secondly, the story will be completely nonsensical, hopelessly convoluted, and poorly conceived, though not necessarily in that order. Last, but certainly not least, is that everything contained in the film -- and I do mean everything -- is a vehicle for Mr. Ittenbach's penchant for deliriously over-the-top violence. I kid you not.

The director's latest descent into extreme horror, the 2007 action hybrid "Dard Divorce," is, for the most part, pretty standard stuff from this grossly misunderstood filmmaker. Weird pacing, unnatural dialogue, amateur performances, silly plot twists, and a variety of ultra-juicy gore are all present and accounted for, which, of course, is exactly why you've ventured this far off the beaten path. After all, a sane person doesn't just stumble across the work of Olaf Ittenbach purely by accident. No, you have to draw a map, plot a course, and embark on a serious expedition if you wish to locate the original uncut versions of his blood-encrusted psychotronic creations. If you're wasting your time with the abridged Region 1 versions of his movies, you're seriously missing out.

Truthfully, "Dard Divorce" is probably Ittenbach's most concise and focused project to-date. In fact, the film is more of an action/thriller than an outright horror picture, though this shouldn't dissuade seasoned gorehounds from giving this particular endeavor a proper investigation. The picture chronicles the events stemming from what appears to be a common, everyday American divorce, one that threatens to prevent a hard-working fast food employee from seeing his two children ever again. His soon-to-be ex-wife, an unscrupulous lawyer who frequently enjoys a good romp in dingy bathroom stalls from time-to-time, seems hellbent on doing whatever she can to ruin his life, though her reasoning is never fully explained. Not that it matters.

Things take a serious turn for the worse when the aforementioned short order cook shows up on his wife's back porch sporting a pair of badly damaged hands and a gaping chest wound. He, apparently, has screwed someone over big time, and the result of his inability to manage his personal affairs has put the lives of children in danger. However, when the police finally decide to show up, the corpse has mysteriously vanished, and absolutely no traces of the body are anywhere to be found. Is someone playing horrible games with this poor woman's fragile mind? Did her husband really steal lots of money and illegal narcotics from a vicious gang of blood-thirsty thugs? The specifics really don't matter too much.

"Dard Divorce" is, once again, nothing more than a series of cheap, poorly-scripted scenes haphazardly strung together to support the director's insatiable desire to assault your senses with as much stomach-churning violence as he possibly can without causing your brain to turn to liquid and ooze from your ears. Ittenbach pulls no punches here, delivering a grotesque tapestry of brutality which includes multiple disembowelments, the complete evisceration of children, various dismemberments, and lots of uncomfortable eye damage. If you're at all squeamish, don't even bother. Even yours truly had to look away on occasion.

"Dard Divorce" exists simply to appease those who enjoy an abundance of cruel, mean-spirited bloodshed, nothing more. It's frequently hard to admit that you enjoy movies of this nature, especially when people are quick to judge those who spend their free time watching a psychopath cut small, helpless kids in half with a chainsaw. My own personal enjoyment is derived from the lame, ham-fisted acting, the laughable script, and, yes, the soul-shattering shock value of its violent content. Unintentional entertainment is still entertainment, even if it comes in a socially unacceptable package. The picture is designed specifically for select audiences, and if you miss the demographic by even an inch, chances are you'll hate it with a passion. Simply put, it's fun for all the wrong reasons.