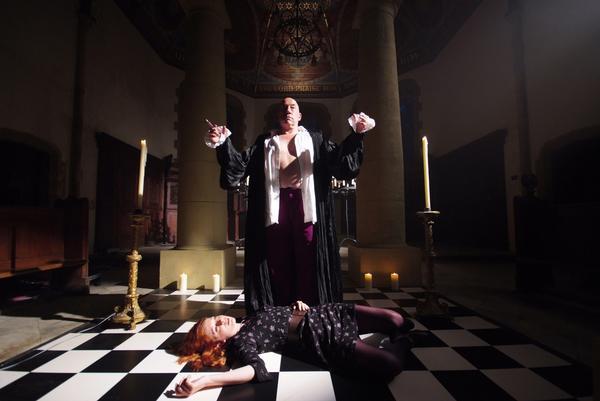 So Erwin Schrödinger had a cat. He decided he would theoretically put his cat in a box with a vial of radioactive funk that would destabilize and kill the cat if so much as one atom decayed. Erwin gave himself an hour to wait and see if the fluid destabilized. At the end of the hour Erwin concluded that… he would not open the box, theorizing that at that moment he had both a living and dead cat. He reasoned that the act of opening the box and observing would change the result. This is the quantum mechanics version of a tree falling in the woods with no one to hear it... well, sort of.

If you’re like me and don’t understand how this works, why it matters and chiefly why nobody fingered Schrödinger as a suppositious sociopath when he proposed putting the imaginary cat in the theoretical box with a hypothetical vial of imaginary radioactive funk, then “Crowley” may require a lot to be taken at face value.

A side note here, at the beginning of writing this I placed a can of Coke Zero in my freezer in an attempt to better understand this cat thing. When I am done writing I will return to the freezer and decide whether I have an intact can, an exploded can, or both.

The main narrative of “Crowley’ begins some 50 years after its title character and world renowned occultist, libertine, and astrologer Aleister Crowley dies in Great Britain. A theoretical physicist, Joshua Mathers invents a virtual reality machine that allows the user to create a tailor made experience through interview and impulse.

He brings the machine to Cambridge where it is used, unbeknownst to Mathers, in an experiment to recreate the spirit of Mr. Crowley and place it into the body of a classics teacher, Professor Haddo. Once back in the flesh AC sets about fashioning a ritual to birth an elemental or moonchild in order to usher in a new era where as he says (1,218 times during the 106 minute runtime) “Do what thou wilt shall be the whole of the law”. In order to stop him, Mathers ( Kal Weber) must keep Crowley from finding “The Scarlet Lady” and completing the rites of the Chemical Wedding (also the film’s alternate title) aka asexual conception.

“Crowley” is the brainchild of Iron Maiden frontman Bruce Dickinson and director Julian Doyle. It is a very ambitious concept backed up by what would seem to be a good amount of research. The time travel paradoxes and alternate realities carry some nice ideas and manage to keep outcomes somewhat mysterious as any film dealing with astral plain should. There are nice moments of irony and black humor interspersed throughout and Simon Callow while a bit thin as the stuttering Cambridge professor Haddo, is entertaining as all get out once he morphs into “The wickedest man in the world”.

“Crowley” has several shortcomings that make it hard to recommend. In this area its greatest attributes are also some of its biggest stubbed toes. There is no doubt that Dickinson and Doyle knew the works of Aleister Crowley backwards and forwards, but their translation of the man’s concepts into film narrative falls well short of the dramatic mark. We have only a vague idea of the implications of what Aleister is trying to achieve, and his all-consuming evil manifests more scat, jizz and piss than it does blood and death. It’s not that I believe the globe would be a glorious bacchanalia should everyone act on impulse, but a world given over to soul devouring hedonism just doesn’t put the fear in me, cinematically.

There are a few other missteps in “Crowley” that are as distracting as its vague and tension impoverished plot. I was not a fan of the shooting style. The film seems pretty stagy and aside from Callow’s scenery chewing, the visual payoffs are relatively small. There is a dearth of scale in the cinematography that leaves us feeling like the repercussions are limited to the haughty halls of Cambridge.

This is only compounded by the lack of a true rival for Crowley. Callow’s Crowley is such a dominant presence that Mathers and the others working to thwart him are forgotten as soon as they leave the screen. We need a scene or scenes where the good guys distinguish themselves and even refute the assertions of the evil one. Simply solving a puzzle, especially one whose solution is already partially known to the audience, doesn’t carry suspense or compel the viewer.

Now back to the cat disguised as my can of soda. I went back to the freezer and decided that while the act of opening it may affect the outcome, I just had to know. Plus my wife would castrate me with a boning knife if she found it before I did. Upon opening I discovered one completely intact but very cold can of pop. It was actually pretty disappointing, for while I didn’t relish the thought of cleaning up the mess, a frozen eruption of brown fizz is a lot sexier than a decarbonated tin of slush.

In some ways it mirrors my feelings toward “Crowley”. The synopsis, that of a reviled cyprian alchemist back from eternity to usher in eons of satanic terror on the modern world sounds a whole lot better than what I got when I pressed play. Oh well, the toll wasn’t so heavy, one can of soda, an hour and forty five minutes lost, and one apology owed by me, to Schrödinger for butchering his theory.