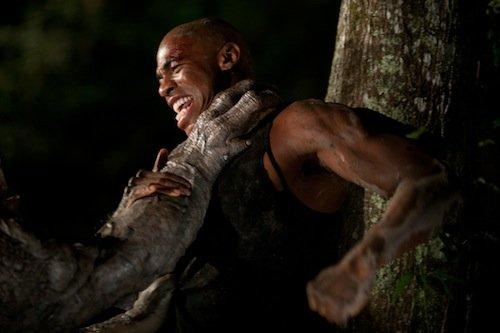 There’s a lot to be said about a movie that goes down the same path as dozens of other horror films and still manages to keep the viewer entertained. “Creature” happens to be one of those movies. It’s chock full of gore, a ridiculous back story, tons of nudity and Sid Haig. Within the first 10 minutes you’re seeing so many similarities to the “Hatchet” films that you start to get a little dizzy. The film does a good job of keeping you entertained though, seriously there’s a ton of nudity, and really only seems to fault when it tries to differentiate itself from the pack.

The movie opens up with a group of travelers in their early 20's packed into a truck traveling across the Bayou back roads. There’s the solider home from the war, the nutty girl who doesn’t mind getting nude, the creepy guy who knows all the area lore and a smattering of other characters you’ve seen before. They stop at a random gas station, run by none other than Sid Haig, to fill up on beer and fuel. They get pointed in the direction of an old home which was rumored to once be the home of Lockjaw, a local family man named Grimley whose wife to be/sister was attacked and killed by an alligator. Enraged by the loss of his love Grimley seeks out revenge on the gator and inadvertently turned himself into a half man half gator monster. Admittedly that part varies a bit from the norm but you get the idea. We’re not treading on any new ground here but the combo of actually having some good actors and not wasting time getting to the carnage helps to keep “Creature” watchable.

Where it starts to lose its charm though is just about the time it tries to come up with a story we all haven’t seen before. I’m not going to give anything away here but at one point or another in the film I honestly thought every character was related to one another. To be fair there are a couple brother/sister combos here and only one of them are actually dating. What starts as a fun movie you can toss on with some buddies and drink a few beers eventually turned itself into a storyline you need a road map and family tree to keep up with. escortcity.ch

It shouldn’t surprise anyone that the movie wraps up with a twist. I’m not going to give that twist away though because honestly I didn’t fully understand how we got there in the first place. But when the credits rolled I still felt a decent amount of satisfaction with “Creature”. Maybe it’s just because I’m a horror fan and I like to know Sid Haig is out there earning a paycheck. Or maybe it’s because my standards for direct to DVD (even though this was in theaters for about a day and a half) are so low that anything I can sit through without falling asleep makes me smile. Either way “Creature” is not a bad film.

I wouldn’t call “Creature” the thinking man's “Hatchet” but I would say fans of that type of affair will be pleasantly surprised, especially considering that it flew so far under the radar that it was hitting trees. Those of you that can either turn off your need to fully understand a plot line or even better actually follow this one might find yourselves pretty entertained here. It may be a cop-out to say it but in this case “Creature” is 100% deserving of the tag line “there’s a lot worse out there”.