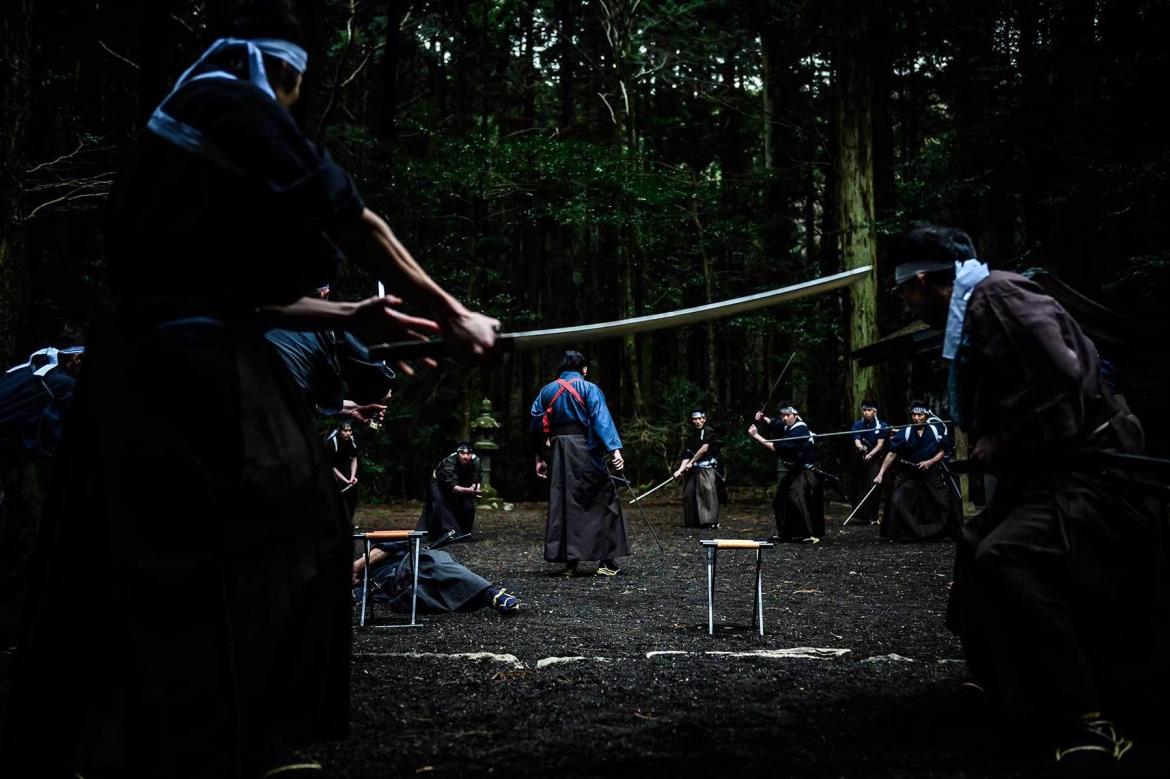 You have no doubt heard the aphorism often misquoted to Albert Einstein that “Insanity is doing the same thing over and over again, but expecting different results.(1) We are here to discuss an insane film. In Crazy Samurai Musashi (2020), veteran director and stunt coordinator Yûji Shimomura delivers a 91 minute film, featuring a one-cut scene (lasting 82 of those minutes), where our “hero” dispatches 588 enemies. You read that correctly; the 300 Spartans can eat their hearts out. You already know if you are going to like this film or not by that description, and instead we will explore if the film achieves its goal of entertaining its audience.

We open on the fall of a mighty clan. Miyamoto Musashi (Tak Sakaguchi) has challenged a mere boy (the new head of the clan) to a duel, after killing Seijuro, the clan’s previous head. The visual language of the film does not key you right away into the relationships between the different groups (other than that they are trying to kill Musashi). There is minimal exposition before the action of the film kicks off at around 8 minutes, and we do not get much in the way of plot other than introducing the next mini-boss for Musashi to defeat. Dialogue is sporadic and anachronistic, but that is likely by design. Musashi is an actual historical figure of 16th century japan -- a famed swordsman, soldier, ronin, philosopher, and artist, who went undefeated in over 60 duels.(2) It would have been interesting to intersperse some more flashbacks to his life outside of the fight to humanize the character we see slaughter hundreds. Little is learned about Musashi’s motivations beyond his desire to win, and it is unclear if, as an audience, we should be rooting against the eponymous lead.

The sets are absolutely incredible and praise should be given to either the set dresser or location scout that put them together. Natural lighting is used, but that may be practical as opposed to stylistic. The use of CGI blood was likely necessary by the sheer feat of doing a single take but it leaves the violence feeling empty. Apart from a moment where Musashi is creatively covered in blood, his clothes remain clean despite cutting through swathes of enemies. The choreography should be greatly praised -- although becoming repetitive at points, the ability to memorize and carry out that many maneuvers to fill more than an hour of screen time is remarkable. There is a sense of realism when Musashi has to rest and when he holds his sword in different stances after exerting a lot of energy. There are moments when he is completely swarmed and we have to infer it is honour keeping the hordes from killing him, as you are taken out of it when someone runs by the camera behind our character and does not strike.

If you, like me, were raised with classic samurai films you may recall films like Yojimbo (1961) directed by the incomparable Akira Kurasawa, Samurai Rebellion (1967) directed by Masaki Kobayashi, and Lone Wolf and Cub: Baby Cart in the Land of Demons (1973) directed by Kenji Misumi; if not, you may remember a Rick and Morty parody. They are normally long, feature archetypal characters with compelling dramatic scenes, and are directed to the hilt with the budget available. Crazy Samurai Musashi was created by people that love sword fighting and this was clearly a labour of love to produce. It manages to deliver some memorable and compelling moments. However, unlike other films in the genre it lacks an emotional story that keeps the audience invested in sticking it through till the end -- it is a spectacle that overstays its welcome. At about the 30 minute mark you begin questioning if you are going insane, or if truly the film will continue to be just one big fight. You watch another 30 minutes and remain baffled. You expect things to change so you keep watching, but the results are the same.