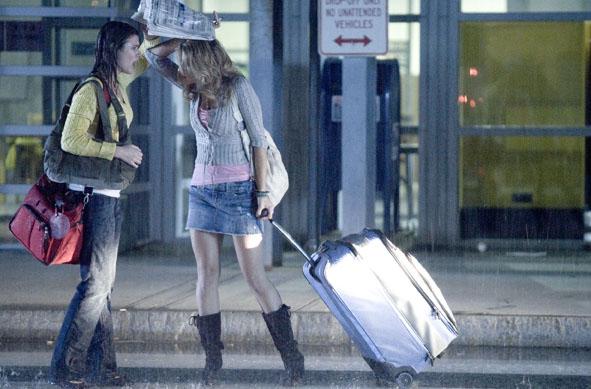 "Shuttle" starts out simply enough. Mel and Jules, two 20-something girls fresh off of a late-night flight home from their Mexican vacation, get stranded at the airport looking for their lost luggage. While there they run in to Seth and Matt, a lady's man and a sweetheart respectively, both of whom were on the same plane. As the girls try to hail a bus home, Seth schemes and convinces Matt to forgo their own ride home in favor of following the girls. In a moment that would affect all of their lives forever, Jules convinces Mel to take the cheaper shuttle, with the driver who is desperately trying to convince them that he's the better choice. Since we're watching a horror movie here, we all know how that choice turned out.

At this point our shuttle driver, known only as "Driver" in the credits, takes a detour through a seedy section of town. When a car tries to run them off the road causing a flat tire, the driver convinces the Matt to come outside to help him. One unfortunate "accident" later and tempers flare... this is when the driver's true intentions are initially revealed.

He pulls a gun on the group, and at first he asks for money, cell phones, wallets, the usual types of things. He then drives them to an ATM, where Jules becomes the instigator of the group. Her attempt at setting off the fire alarm inside the ATM vestibule fails due to a miscalculation, causing the first real outburst of violence from our villain. As things progress, they only get more grim from there.

For most of its running time "Shuttle" is a very competent little thriller. Shot on video with an sparse cast, 2nd time writer/director Edward Anderson shows a deft hand at setting up suspense, directing action and navigating plot twists. The weakest parts of the script are the characterizations and dialogue, a fact which is quite evident in the first 10 minutes or so. We have a few very simple archetypes here, and in case you're deaf, dumb or blind, you're beaten over the head with them enough so that there's not much thought involved. Case in point, if you happened to have trouble telling the blonde trollop from her "final girl" best friend, the fact that she works with deaf children would probably clue you in.

The action ramps up pretty wildly in the 2nd act, when both girls make numerous escape attempts. These are the moments when this film works best. It's surprisingly brutal, with no less than three stabbing/slicings, multiple car crashes, gun wounds and beatings. These girls give the driver (and his eventual accomplice) a run for their money, and every time they seem to come back even stronger. It's a frustrating and harrowing thing to watch.

Unfortunately, as "Shuttle" transitions into the third act, things begin to lose direction. The two girls, sole survivors at this point, end up in some type of warehouse where the true motives for their kidnapping are eventually revealed. This leads to an awkward heart-to-heart between the ladies, where intimate personal details are revealed in an attempt to bond them closer together for the audience. It doesn't last long, as their party is soon broken up.

And that's where I'm going to stop. To reveal the ultimate "twist" in "Shuttle" (not the only one, just the final one) would be akin to ruining the whole experience. It's a punch to the gut... a bleak and hopeless ending in a film that continually coaxes you into not giving up hope. I found it clever, depressing and for the most part, well executed. The key phrase there for me would be, "for the most part".

Because where "Shutter" falters, besides the awkward setup in the beginning, is having a third act that drags on for far too long. In a sleek little film where the action is well paced and plotted out for over an hour, the third act is a little perplexing. 107 minutes in a film like this, a film with no more than 6 key players, a film that is mostly action based, is inexcusable. Nearly all of the fat is contained in the third act, which for some inexplicable reason feels the need to set up the final twist more than is necessary. One more "fight to the death", one more "ooh what does it all mean" moment, and I may have tore my hair out.

The reason why this is all so frustrating is that I genuinely enjoyed the twist at the end. Well, maybe "enjoy" isn't the right word given the nature of what happens, but perhaps "respected" is better. It's a no holds barred, ballsy decision that actually makes some sense in the grand scheme of things. Of course there are huge plotholes throughout, but they were largely necessary in order to spread this thin premise out into a feature length film. There's so much potential here, but one can't help stare at that running time... 107 minutes, with wonderment and confusion. Take a knife to this, and it's one of the best thrillers I've seen in a long time. Otherwise, It comes without a whole-hearted recommendation.