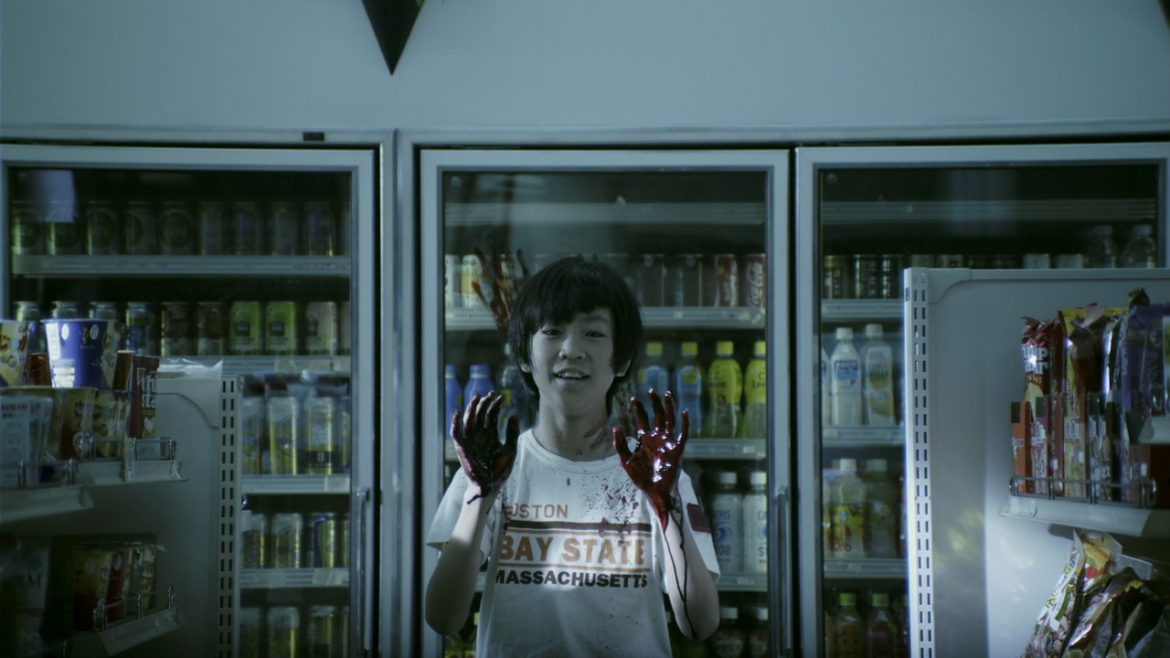 Revenge is at the heart of a lot of tales in our preferred genres. A grievous offense, sometimes accidental is turned into a raison d’etre by a psychopath or an every person pushed too far. Tetsuya Nakashima’s “Confessions” is without question a revenge film, but its structure, tone and story to some degree work against a traditional revenge film pay-off. That undermining message isn’t demonstrated as a fruitless pursuit clouded by anger as it is in “Irreversible”; rather Nakashima’s film seeks to explore multiple perspectives and conditions created by the human experience that may fuel retribution and ultimately tragedy.

“Confessions” starts in a classroom where a middle school teacher named Moriguchi presides over a class of rowdy milk-swilling adolescents. Moriguchi announces her retirement. She details her reasons for maintaining a steely detachment throughout her tenure as well as revealing what has prompted her retirement. The kids settle down instantly when she shares that the death of her young daughter Minami was not an accident as previously thought, but was in fact a murder committed by two of the pupils in her class. Moriguchi calls the duo ‘Student A’ and ‘Student B’ and announces to the class that she has injected HIV infected blood from her daughter’s father into the milk that was just consumed by these two students. The class quickly gleans the identity of the culprits and Moriguchi wraps up her final thoughts to the class by telling them that her hope with this act of revenge is that they will all have a greater respect for life.

Moriguchi retires and the class is left to keep the secret that they were entrusted with that day. A new young instructor with a surplus of enthusiasm replaces Moriguchi and watches as the students align against the two student-killers Naoki and Shuya. From this point forward the story is broken into chapters where each of the prominent parties ‘confesses’ their side of the story as well as their motivations. By the film’s end many are not who they have seemed to be and the central causes of the initial tragedy are seen as a complex knot of broken people fighting against hopelessness to rediscover the essential things they have lost.

This is a fantastic film. It is layered to a staggering degree; it never sacrifices momentum for characterization and yet it still manages to give the viewer really detailed portraits of the people involved. On top of this it has an ending that provides a degree of satisfaction in the magnitude of the Moriguchi’s vengeance and also exposes that retribution as an empty pursuit by a shattered soul.

There is so much going on between the opening and the third act that this film probably will necessitate a few viewings to take it all in. Even after numerous sittings there is a strong possibility that some of the cultural commentary contained within the film might be missed by non-Japanese audiences. For this reason a comparison to the films like “Suicide Club” and “Noriko’s Dinner Table” seems apropos.

This is not to say that there aren’t a number of universal themes that are explored. The aching loss of intimacy between mothers and children as they age apart and the problematic permutations of those feelings is at the center of much of the action. The tyranny of groupthink is given a hard look, as is the damage that ensues from adults misinterpreting teenagers’ needs and deeds. The open toxicity of children growing up without discipline and their tendency to rely on lionize/demonize thought patterns also plays a big role in “Confessions”

If I have complaints about this film, they are minor. The shooting is beautiful but there are short passages where it feels a little “CSI” or even “Grey’s Anatomy”. Some of the reason for this is probably that the slickness of the color choices and camera work when married to a soundtrack full of atl-rock darlings occasionally produces a bit more melodrama than simple, powerful pathos. But on the whole this movie is just too well orchestrated and mannered to get stuck in contrived emotionality. The other complaint I have is that there is a lot of expository dialog that is utilized to bring the plot to it's endpoint. In a lesser director’s hand this might have been a terminal flaw, but here it is well handled and might almost escape notice because the painterly style the visuals keeps the audience invested in solving the puzzle, even when reading long dialog segments.

Overall, I doubt I will see a better film this year. As it is, I am not sure how the Academy managed to pick 5 foreign films from last year that they thought were more deserving of recognition than this one. “Confessions” cements itself as a sensational piece of art by not giving the viewer any path to its conclusion that doesn’t require them to invest in the story and its characters. Who knows, maybe the film’s adherence to revenge film plot machinery hurt it in the Academy’s eyes. No matter, a film this good doesn’t need to garner the big hardware to be accepted as great. It will be deemed great on its merits; for taking risks, accessibly forwarding complex themes, and exemplifying amazing craftsmanship.