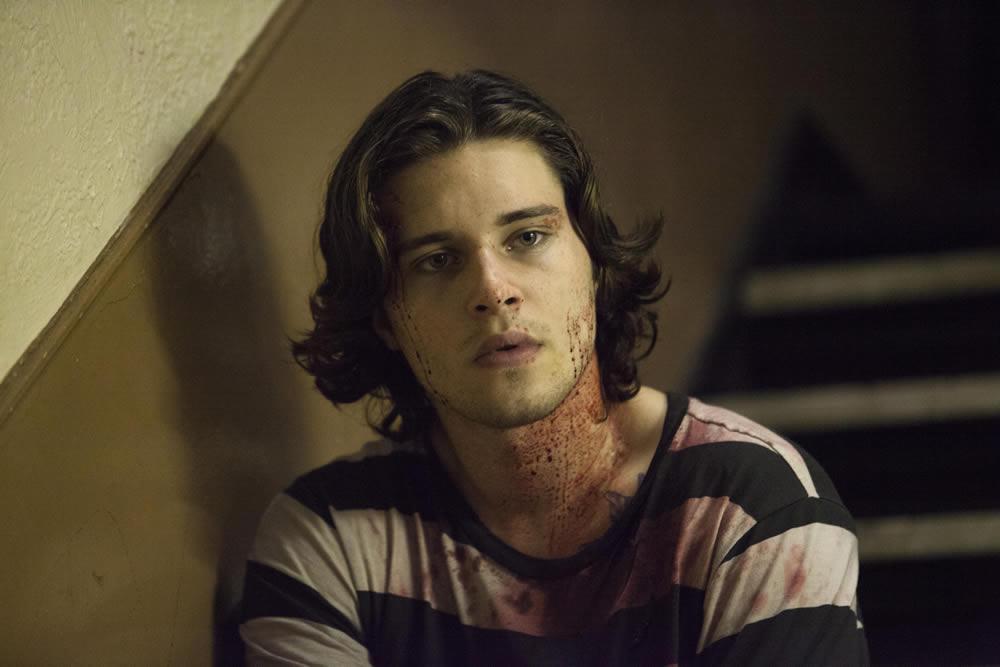 Under the right circumstances, especially from a cinematic standpoint, watching people pretend to be under the influence of drugs and alcohol can be entertaining. Naturally, it behooves one to advocate for those to avoid illegal substances, but they remain a prop in the movie world for comedy and as a cautionary statement. Condemned, along with maybe being a thinly veiled statement on class, wears both patches of substance abuse on its sleeve. A testament to the ugliness and horrors of drug use and at others a hilarious site to behold whether it be intentional or otherwise.

Concrete Jungle director, Eli Morgan Gesner, presents a bizarre and ugly world with Condemned; placing a spoiled rich girl, Maya (Dylan Penn), with mommy/daddy issues in a condemned Manhattan apartment complex with her punk rocker beau, Dante (Ronen Rubenstein). Thrown in with a rag tag collection of low-lifes the collective stench of bodily fluids and toxic drug fumes collecting in the buildings aged pipes causes the tenants to develop nasty boils all over their bodies and scramble their brains to the point of causing them to commit bloody murder. Luckily for them, the resident drug dealer has left for the day and locked them all inside leaving everyone to fend for their lives as the virus continues to spread amongst them.

Gesner, not for a lack of spirit, is not winning points for originality at any point here. What's more, he makes things really tough on himself by taking the better part of 45 minutes before letting the chaos unfold. In that 45 minutes one thing is made abundantly clear- this building is full of scumbags with the exception of Maya and her core group of friends- who are unlikable for completely different reasons. There's the homosexual skinheads who are into bondage and enjoy peeing on each other, a Jewish drug addict who loves to physically abuse and pimp out his transexual lover, an Asian drug dealer with "DEATH" carved in the blade of a knife, and a crazy ol' black dude who for some reason has a stockpile of mannequins with dildo's strapped to them. With a group like these how can things not end with rainbows and sunshine?

Condemned is a mess- plain and simple. For well over half of the film's runtime there is absolutely no structure or direction. Gesner certainly has an exaggerated grasp on the underbelly of society, but the first hour is completely lacking point. Even once the blood starts to flow, when it's all said and done all that's left is a feeling of, "Well that was kinda gross." A few decent practical gore effects aside, the budget seems to have been spent entirely on liquids that look like gross bodily fluids. Furthermore, Gesner's script is laughably bad, bizarre, and once again pointless.

It takes a great deal of forgiveness to give Condemned even a little bit of credit for having anything resembling an agenda, but underneath the urine, bloody feces, and vomit...it's kind of there. Save for a few genuine laughs born from the completely random drug related chaos there is very little to recommend here. In the end, Condemned is a pretty apt title for the eyesore that is Gesner's film.