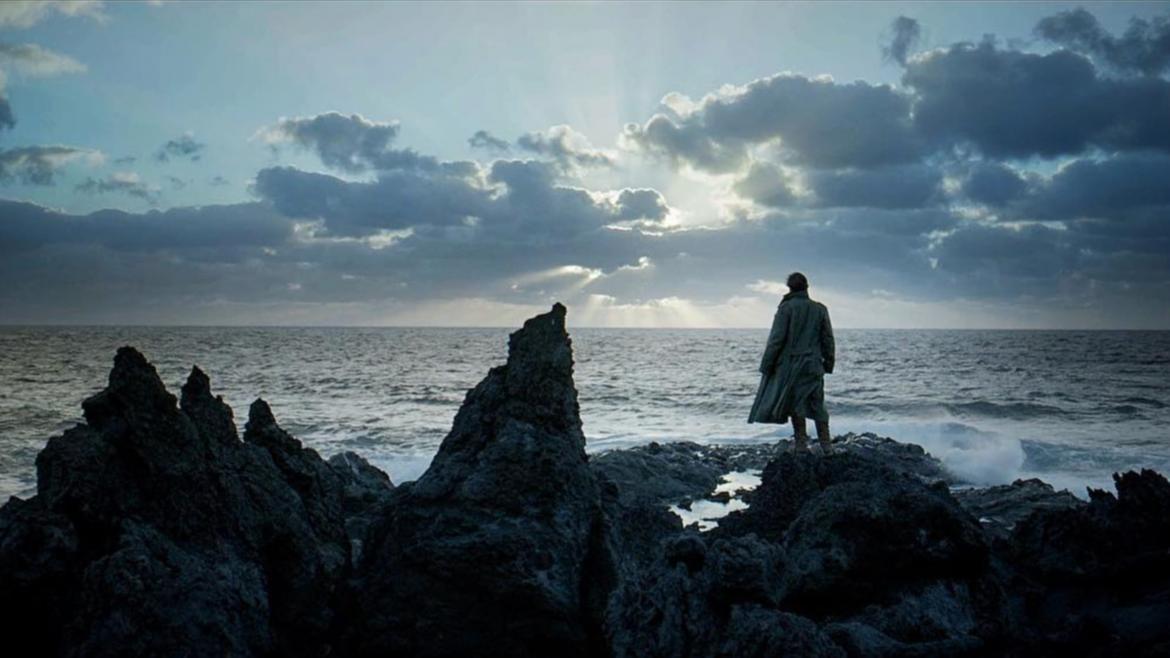 When Frontier(s) was released back in 2007 filmmaker Xavier Gens and a number of other French filmmakers had been earmarked as the masters of the New Wave of French horror due to the extreme nature of their films at the time. This lead him to helm Hitman, the video game adaptation that was a flop both commercially and critically. He eventually returned to some favor with the apocalyptic bottle film, The Divide before diving back under the radar with a subpar possession flick and now Cold Skin--which unfortunately shows a director devolving into a gun for hire with no feel for pacing or thrills.

Gens latest finds a man (David Oakes) who is given only the name Friend by an isolated lighthouse watchman, Gruner (Ray Stevenson) when he arrives to record weather trends on a remote island. After arriving he finds out quickly that each night the island is attacked by creatures from the sea--one of which Gruner has kept and trained to keep him company which Friend names Aneris (Aura Garrido). The two form a tacit agreement that Friend can stay in the lighthouse so long as he joins Gruner in his assault on the creatures when they attack. Though the longer each is on the island, the less either trusts one another.

Cold Skin is based on the novel of the same name by Albert Sánchez Piñol--a fact which feels somewhat evident based on Friend's narration. Many scenes are bridged and synced to Friend's eloquent narration, leaving Gruner to be painted as the bearded Neanderthal that Friend believes him to be. Stevenson's character certainly earns the designation, often parading around in the nude, grunting, using Aneris for his sexual gratification and treating her as though she's a mindless pet. So it's not hard to pin down the condescending attitude that Friend has with Gruner and even less surprising that Friend sees more than just blind animosity within Aneris and the creatures.

Thin characterization does Gens' film no favors as the director wallows around the premise for far too long giving the audience very little to engage with. Bringing a book to life is more than just painting the beautiful horizons and potentially iconic one-off shots of creatures approaching in the dark as the light from the lighthouse illuminates them for a split second. Neither Oakes nor Stevenson really bring much to the table to cling to with these characters, leaving the silent Garrido to use her feminine physicality to do all the heavy lifting that the men of the film are unwilling or unable to do.

The biggest problem with Cold Skin is that it's so paint-by-numbers in its execution that it almost lulls the viewer to sleep like their favorite childhood bedtime story or lullaby. The time between creature attacks grows longer and longer and the interactions between the three main characters (one of which, Aneris, again...never talks) are not nearly as stimulating as they need to be. The impressive visual aspects and tricks that remind us that Gens still has-if only in passing-a firm grasp on the medium, while the rest often feels like he's simply going through the motions and is not mentally engaged with the story.

Cold Skin has the bones of an exciting and interesting horror adventure. However, a perceived lack of passion and severe lack of energy throughout leaves this one feeling as chilly as the monsters' described outer tissue.