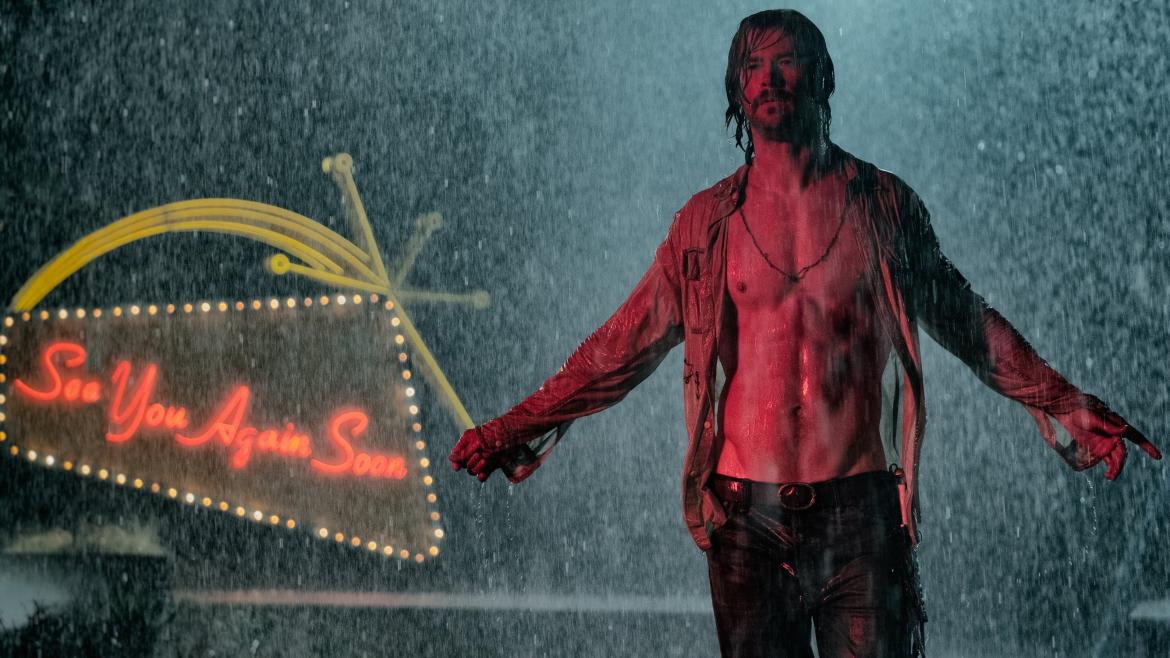 Off-brand Tarantino may as well be a genre of its own at this point. When Tarantino turns in something less than his highest standard it's still better than your typical Hollywood fair. When a filmmaker turns in a somewhat lackluster work that is Tarantino-esque its mediocrity is much more pronounced. Drew Goddard's triumphant return to the big screen, Bad Times at the El Royale is not damningly mediocre, but it's discount Tarantino vibe looms ominously over the nearly 2 and a half hour behemoth.

Seven strangers converge at the once prestigious El Royale, a bi-state establishment offering rooms on the California and Nevada sides of the property. Each of the seven individuals have a slew of secrets they are either hiding or trying to uncover. Slowly their paths begin to collide and the secrets all rise to the surface resulting in a standoff in which they must all face their demons.

El Royale's cast is its strongest asset with Goddard's style coming in a close second. He is able to emulate the Tarantino vibe, while his script isn't as up to the task. Imitation only gets you so far and if you don't actively bring something new to the table style alone wears thin. The utilization of the various plot lines keeps the bloated run time engaging for the most part, but when they all collide the journey ends up not wholly satisfying.

The arcs centering on Jeff Bridges' faux priest and Cynthia Erivo's lounge singer take up the majority of the focus, although we get a healthy dose of the inner workings of each character's back story in true Tarantino fashion. However, the film's third act, largely a bottle film of its own, fails to really utilize anything it had built up to that point. The tentative bond struck between Bridges and Erivo, or the sisterly dedication of Dakota Johnson and Cailee Spaeny, are secondary to the scene chewing Chris Hemsworth as a charismatic cult leader with a Charles Manson-esque vibe. (Who doesn't wanna see Thor hamming it up while hip thrusting the audience into a trance?) The abundance of chess pieces moving about in the climax feels somewhat undisciplined and directionless in terms of the film's overall personality. A last-minute reveal of a character's intense regret for their various sins has a momentary and darkly comedic sensibility, but ultimately just further overstuffs an already overstuffed thriller that's at least 45 minutes too long.

A lot of Bad Times' lesser aspects are the times that it dips into the mystery and underlying sense of something greater under the surface of the hotel's inner workings. Unfortunately these allusions fail to deliver. The dark corridors of the hotel's secret hallways provide an ominous sense of sinister workings that had a ton of potential but is not explored nearly enough. The plot device that drives that reveal is as mysteriously frustrating as the lack of any real twist or tense insanity during the climax. The climax itself is quietly tense, for sure, but its energy kind of takes a nose dive when it could have crescendoed into a fascinating final showdown.

Bad Times at the El Royale is a hard left turn from the genre insanity that Drew Goddard delivered in The Cabin in the Woods. It's also a film that begins with so much promise and is chock full of terrific performances that just don't have enough notable or memorable story beats to justify its epic length. All and all Bad Times is still a good time at the theater, it's just not quite in the upper echelon of Tarantino riffs.

A Horrible Way to Die