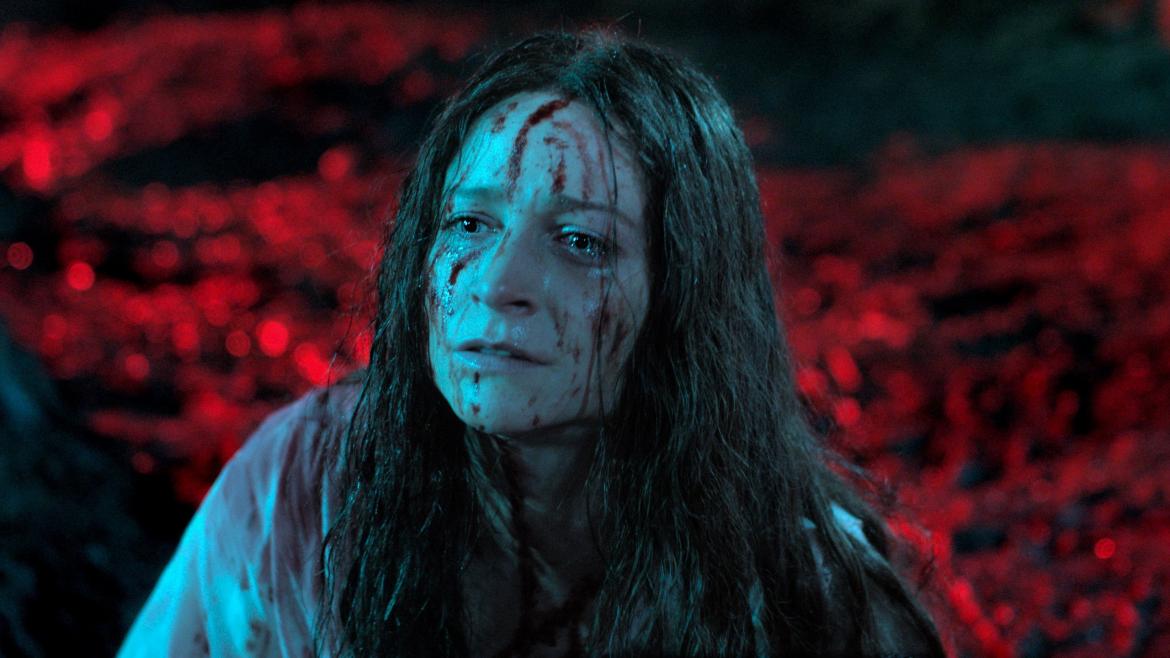 What effect do horrifying images have on us? There have been a number of articles over the past few years about the people who work as content moderators at various social media sites and the toll that comes with being exposed to such content. Censor, the feature debut of Welsch writer/director Prano Bailey-Bond takes a look at this phenomenon within the context of the height of the Video Nasties scare in the United Kingdom.

The Video Nasties term was coined as a label for low budget horror and exploitation films that contained graphic imagery. After an organization called the National Viewers’ and Listeners' Association stirred up panic and pressed for this kind of content to be kept out of the hands of children, the British Parliament passed the Video Recording Act of 1984 and implemented strict censorship laws. Like our content moderators of today, this law required people to be bombarded with this content for a living, presumably for the social and psychological health of everyone else.

In Bailey-Bond’s film, one such censor, a young woman named Enid (Niamh Algar), feels a real calling to do her work. After her younger sister went missing when the two were children, she holds herself responsible for protecting society and everyone in it. In her small office, it is clear that she takes her job far more seriously than anyone else. She is incredibly precise in her work, which requires her to rewatch sequences multiple times to make sure she cuts just enough but not too much. When she screens a film that feels oddly familiar, she begins a journey into her psyche that’s just as troubling as the worst of the scenes on the cutting room floor.

Censor is a deftly directed film. Most of the movie, especially when we spend time in Enid’s everyday life, is drab and grey as compared to the oversaturated videos that she watches. Bailey-Bond said in a Q&A that she wanted her film to look different from other 80’s period pieces that have been released recently. She talked about the use of color and excess in most of these projects and said that wasn’t how she remembered the time period. She wanted to portray a “Grey, cold, and bleak Britain...Margaret Thatcher’s Britain.” She and her team pay a great deal of attention to detail. Each fake Video Nasty that Enid watched had its own internal storyline, even if most of it was never shot. Shot on 35mm, the film is stunning to look at.

Enid’s quest (and Bailey-Bond’s exploration) may feel specific, but it is a deeply relatable one. Bailey-Bond was interested in exploring her relationship with the horror genre, and all of us are implicated in her questioning. We are treated to a montage of “objectionable” sequences from films--some real, some not--as we hear newscasters fearmongering about the danger of these videos. This is later contrasted with violent and awful news footage of what is going on in the world, questioning the media’s (especially the 24 hour news cycle’s) culpability. When a producer offers Enid a role in one of his films, she dryly replies, “I don’t think I like the idea of being raped and cut into pieces on screen,” to which he replies, “The public would love it.”

Censor is a wild ride, but it’s also an interesting journey into what motivates any of us to watch these Video Nasties. Research shows that watching horror may help us to cope with anxiety, because it allows us to experience fear in a safe and controlled anxiety. But what impact, if any, does this imagery have on us? Do horror movies lead people to violence or, as the movie said, is it more likely that “Horror is already out there, in all of us.”

Screened as a part of the 2021 Sundance Film Festival.