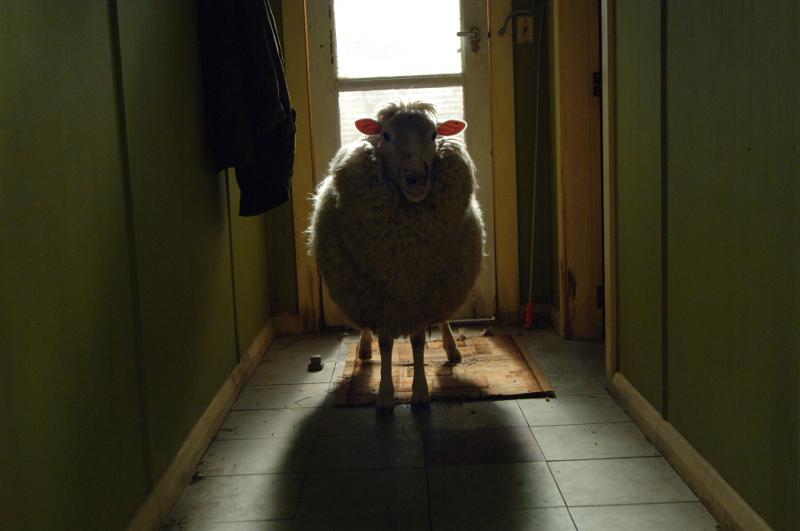 You can’t throw a rock in the horror section of your average video store without hitting a movie about something cute and innocent that wants to kill you. We’ve seen killer clowns, evil dolls, rabid grannies, murderous children and giant-sized versions of everything from ants to bunnies. It was just a matter of time until some filmmaker (most likely from either New Zealand or Wales) got around to making a movie about killer sheep. The Kiwis did it in 2006 with “Black Sheep”, a blood and guts soaked black comedy that nicely balances the humor and the horror.

At the center of the film are two brothers, Henry and Angus. When they were children Henry showed a great deal of promise as a shepherd and one day his jealous older brother played a trick on him involving the carcass of his pet sheep. Immediately afterwards they learned that their father had died in an accident and the shock of these two traumas turned Henry in a city-slicker with a serious phobia of sheep.

In the present day, Angus has become a successful corporate farmer who has abandoned the traditional ways of in favor of high tech methods and is preparing to announce his latest breakthrough which stands to change the world of shepherding forever. Angus has returned to the family homestead after many years in the city to sign over his part of the farm to his brother. Meanwhile, a pair of patchouli-scented animal-rights activists have snuck onto the farm in hope of exposing the truth about Angus’s latest breakthrough. One of the activists steals a mysterious canister that he later finds out contains a zombified lamb that bites him and escapes to infect the rest of the herd leaving the activist to slowly transform into a – wait for it – were-sheep.

If that synopsis sounds like something a pre-“Lord of the Rings” Peter Jackson would’ve dreamed up there’s good reason. “Bad Taste” and “Dead Alive” are clearly inspirations for “Black Sheep” and the (mostly practical) special effects were handled by Jackson’s friends over at WETA Workshop . “Black Sheep” mines the “splatstick” style of Jackson’s early movies that takes equal parts horror and comedy and douses the whole thing in a few buckets full of gore. Horror-comedy is a difficult genre to pull off and most horror-comedies end up being neither funny nor scary, but “Black Sheep” delivers on both fronts.

If you look at the directors who nail horror-comedy like Jackson, Sam Raimi, Stuart Gordon and Frank Henenlotter, you’ll notice a trend. The horror tends to be in the foreground while the comedy stays in the background. The characters act like they’re in a horror movie, not a comedy, and the laughs come more from the absurdity of the situation than from jokes. When the comedy is played up too much, the movie is in danger of descending into camp, which might have its charms but is by nature a much lighter, more disposable genre.

The makers of “Black Sheep” know that the idea of zombie sheep is funny and absurd enough that they don’t have to nudge us in the ribs and go “What do you think? Were-sheep. Pretty funny, huh? Aren’t we wacky?” Not that the movie takes itself seriously. Any film with a scene involving three people and a dog jumping off the back of a truck before a sheep drives it over a cliff is clearly aware of what kind of movie it is.

Some of the characters in “Black Sheep” are a broad, like the hippie girl who falls into a pit of sheep entrails and immediately reaches for her handy aromatherapy candle, but they still seem more like characters than caricatures. The story of the scrappy band of misfits against the greedy industrialist is nothing new but it was the basis of two-thirds of the movies that came out in the 80s for a reason. It works and fans of unpretentious, silly but fun 80s-style movies will find a lot to like in “Black Sheep”. It’s not going to change your life but it will keep you entertained for 87 minutes.

The old school, throwback vibe is especially evident in the special effects. If you miss the days when horror movies had people wrestling with goo-covered latex hand puppets, then “Black Sheep” is the movie for you. The monster effects are lovingly crafted and there’s plenty of gut-munching, dismemberment and mutilation to keep fans of the sticky stuff happy. It should be impossible to make sheep look menacing, but somehow, between the special effects and the numerous shots of blood-soaked sheep charging across the landscape, the movie does a pretty good job of wringing scares out of the gentlest of beasts.

The cartoonish style might test the patience of some people, but fans of horror-comedy will have fun with “Black Sheep”. Now that killer sheep have been done successfully, future film-makers will have to look a little harder for the next supposedly safe and innocent thing to give the horror treatment to. How about homicidal teddy bears? Vampire hamsters? Haunted petting zoos?