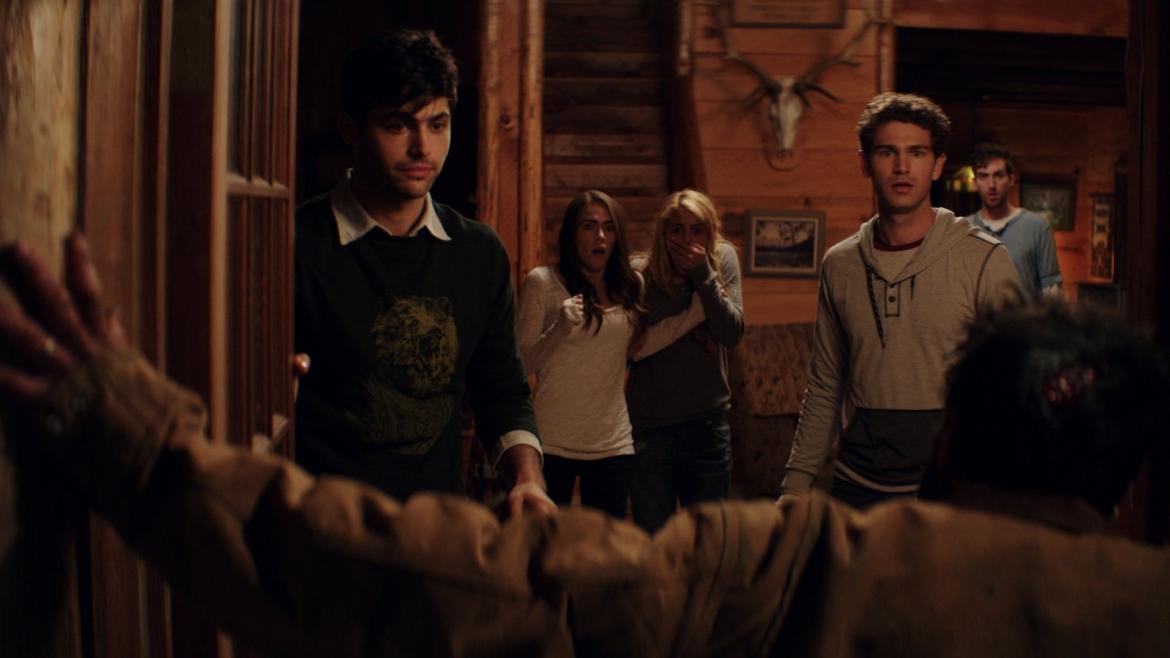 It started with a string of sequels no one wanted, and now it becomes the second remake of 2016 that no one wanted. Eli Roth's original Cabin Fever is certainly not a masterpiece by any stretch of the imagination, but Travis Zariwny's version makes it seem like it could be. Unsurprisingly, by working from Roth's original script, the 2016 remake adds absolutely nothing new and instead feels like the idea ate away at itself until nothing interesting was left after all these years.

Take a cast of a handful of CW rejects, Roth's original script, and one or two hackneyed "updates", throw them in a jar, give em a shake and there you have it...Cabin Fever 2016. A nearly shot for shot update of Roth's calling card that follows a bunch of 20 somethings falling prey to a flesh eating virus in the middle of the woods.

There's essentially no better way of putting this film into words. If you've seen Eli Roth's Cabin Fever than you've already seen the remake- better yet, you've seen the best iteration of this story that currently exists. It's as if a group of kids got together with mom and dad's camcorder and said, "let's pretend to have a flesh eating virus," except they have access to a Hollywood effects team. The cast seems as confused and bored with the idea of remaking a movie from 2002 almost as much as everyone who is duped into watching it. Even if the original weren't a thing, I'm fairly confident the neutering that took place here would still crush your soul. The cast, the poster, the trailer...it's all a lazy rehash that completely misses the point and spirit of Roth's original.

Zariwny seems to be trying to put on his best Fede Alvarez hat, taking a property that some people love and in the process of updating it removed the humor and character that made the original what it was. The quirk present in Roth's original script is there, but the tone of Zariwny's direction isn't nearly as playful and all the winks to the audience are gone. The only laughs left to have are at the actors trying so hard (eh....kind of trying) to take any of this seriously.  There is no charm or chemistry among the cast whatsoever- it's as if they all met the morning of the shoot and decided they all hated each other. If anyone involved in this debacle had a background in soap operas everything would have made much more sense- it still wouldn't be good, but it would have made sense.

The film devolves into Inception-esque audio chaos with characters just screaming dialogue at each other as the score tries desperately to drown them out. The entirety of the last act may has well have been one long fart noise and it'd have had the same effect. Zariwny's film looks pretty and features one or two solid gore effects, but Cabin Fever is a rotting pile of its former self and a pillar as to why the horror community dreads remakes. If anything good comes from this it's maybe a newfound respect for Roth and his original- until you realize he endorsed and produced this garbage.