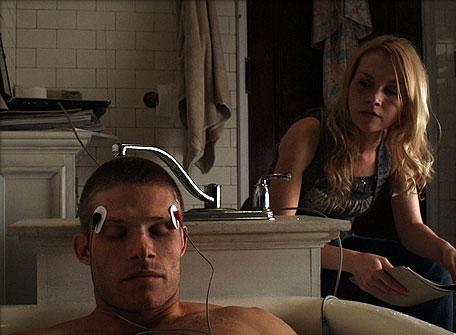 Sam Reide and his power of the time stream is back. Some time has passed since the death of his girlfriend in "Butterfly Effect 2" and her killer is set for execution on death row. Only now, Sam is convinced that Lonny may not be the killer. Set on freeing the man he thinks is wrongfully imprisoned, he skips back in the time stream once again merely to observe and get an eye witness account of the events of that fateful night. Only this time Sam manages to change the past, which drastically alters the future once again. This time, he alters the future by creating a serial killer hellbent on destroying the women he's known throughout his life.

Being the third installment of a film franchise I have never watched nor held any real interest in, I had zero expectations going in to "Butterfly Effect: Revelations". This left me open to whatever director Seth Grossman had put together. The film had one plus in casting upcoming genre regular Rachel Miner, so I figured that was a bonus. After sitting through to the credits, I found myself treated to a semi-pleasant puzzler that failed to all out impress, yet also didn't manage to turn me off completely.

The key element at play here is subtle subterfuge aimed at confusing the viewer and keeping them guessing. While it is true that the ending of this film was telegraphed from the start, they still manage to keep the plot moving while staying engaging. Unfortunately, if you haven't kept up with the previous films of the franchise, there are heavy set of rules in play that only manage to confuse the inexperienced and to point out implausibilities in the plot.

A lot of this preexisting knowledge is relied upon early in the first act. Why is this man sitting in a tub of ice? What is his sister doing there with him? Which one of those young blond girls in the past was his sister and which was the girlfriend? Eventually, they do manage to meander their way to explaining these items, but by then we've accepted the fact that we're confused and meant to be, and we've developed a certain amount of apathy to the whole endeavor.

Another fact adding to this apathy is a total disconnection from our main characters. While Rachel Miner and Chris Carmack both turn in competent performances, they are simply left on screen with nothing much to do. There is little character development devoted to the pair aside from a handful of shaky flashbacks and bad wigs. It does fill in the holes explaining how we got to this point with Sam and Jenna, but it does nothing to make us care. As the film rolls on, it quickly begins to feel like watching badly edited home videos belonging to a coworker. You do not know who any of the people are in the movies, and there is nothing happening on screen to make you want get to know them, either.

"Butterfly Effect: Revelation" is not so much a horror film as it is a sci-fi thriller. There is a new serial killer slant given to the franchise, but once again there is little being done with it. While I did enjoy parts of the film and was pleasantly surprised in my zero expectation state, the movie ultimately fails to lure the viewer into wanting for another sequel.