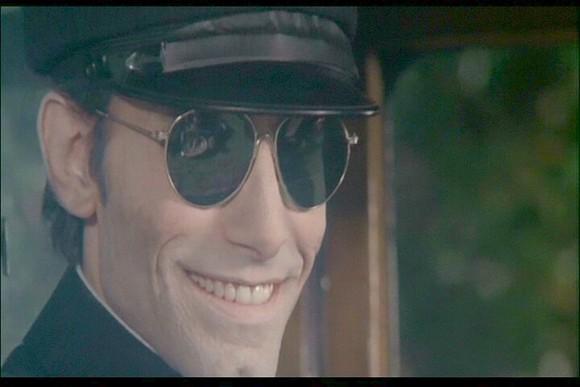 I’ve always been a sucker for the mainstream Hollywood horror movies of the 70s. Today it’s no big surprise when a respected actor slums it up for a paycheck in some disreputable genre flick but back then there must have been some kind of perverse kick to be had from seeing legends like Richard Burton or Gregory Peck fighting the forces of evil. For my money, there is no finer ham than an accomplished and acclaimed thespian putting their all into the role of sweaty priest or step-father of the anti-Christ. That’s why I was looking forward to “Burnt Offerings”, a 70s haunted house film featuring the likes of Oliver Reed, Karen Black, Burgess Meredith and Bette Davis. Unfortunately, even the hottest past-their-prime stars of 1976 can’t save a movie that plods along for two hours to tell a story that savvy viewers will be able to figure out in the first fifteen minutes.

Reed and Black play the Rolfs, a family looking for a summer rental house for themselves, their son and an elderly aunt. They find a beautiful Victorian mansion for a steal with one catch: the leasers’ elderly mother lives the life of a recluse in a room upstairs and they must leave three meals a day on a tray in her sitting room. Even with the old bag in the attic, the price is just too right to pass up and the Rolfs move into the house.

Black agrees to take over the role of care-giver for the old woman and finds herself increasingly intrigued by the Victorian-era photographs and décor that litter the house. Meanwhile, Reed’s dark side gradually manifests itself as an innocent splash with his son in the swimming pool turns into a near drowning and nightmares of his own mother’s funeral begin to haunt him. Hmm. A seasonal rental, a mounting obsession with the building’s mysterious past, a good man sliding into madness… does any of this sound familiar? Yes, “Burnt Offerings” is a kind of proto-“Shining”, but whereas “The Shining” ranks as one of the greatest books and movies in the horror genre, “Burnt Offerings” feels more like a dull romp through a supernaturally-tinged 1970s television drama.

The TV Land vibe is no accident. “Burnt Offerings” was directed by Dan Curtis, the television producer who brought horror elements to American television in the 1970s with shows and made-for-TV movies like “Dark Shadows”, “Kolchak: The Night Stalker” and “Trilogy of Terror”. While Curtis might have brought some boundary-pushing, controversial subject matter from the big screen to the small screen, the process doesn’t quite work in reverse. “Burnt Offerings” has the talky, snoozy pace of a forty-year-old television drama with very little in the way of scares or surprises.

While this is ostensibly a haunted house movie, there’s not a whole lot in the way of spookiness. No blood dripping walls, no spiritual manifestations, no poltergeist activity. The most exciting things the malevolent forces in this movie get up to are a few excessive waves in the swimming pool and some particularly violent shrubbery. Even when the house gets around to killing people it’s done in the most boring possible fashion. One character twitches for a bit and dies of unexplained causes, one jumps out of a window and one dies when a chimney falls on them offscreen. The movie does an excellent job of ensuring that any potentially dramatic or scary moments have all the bite of an episode of “The Rockford Files”.

The final twist is the kind of reveal where we’re all supposed to act surprised when that thing that we all knew was going to happen way back in the first act finally happens. I’m tempted to give the movie the benefit of the doubt that in the 1970s such a twist might played a bit fresher than it feels today, but stale is stale and a two-week old doughnut is just as inedible as a forty-year-old one.

I wasn’t just disappointed in “Burnt Offerings”, I was bored silly and I really don’t understand how the movie has a fairly good reputation among horror buffs. My guess is that nostalgia is to blame. The movie is tame enough that it could probably play on TV almost entirely unedited and was probably an early introduction to horror for many children in the 70s and 80s. If you are an eleven year old living in the late 70s or early 80s, then “Burnt Offerings” might just be the scariest movie you’ve ever seen. If, like most BGH readers, you live in 2010 and have seen more than two horror movies then “Burnt Offerings” is more likely to be a smoldering pile of yawn.