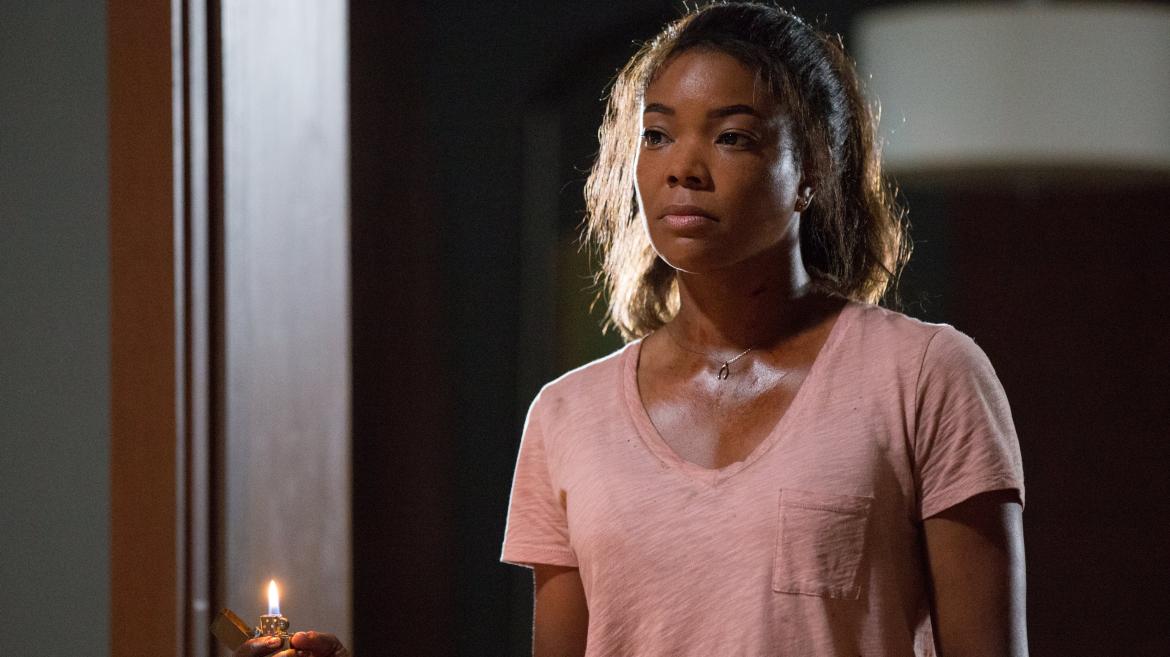 The line between thriller and horror is thin and blurry. The distinction seems primarily used to differentiate audiences, rather than content. Among non-genre fans, it is not uncommon to hear people say that they like thrillers but not horror films, much in the same way people express that they are “spiritual but not religious.” When faced simply with a film’s plot, it can sometimes be hard to guess what genre label a film might garner. This is the case with 2018’s Breaking In, whose plot is distilled on IMDB to just one sentence, “A woman fights to protect her family during a home invasion.”

The movie centers around a mother named Shaun (Gabrielle Union) who has taken her two children to spend the weekend preparing her late father’s vacation home. Shaun and her father were estranged and the tension is palpable. When the trio arrives they discover that the house is a veritable fortress full of high tech safety features. Shaun chalks it up to senility and paranoia, but before long they are under siege and Shaun has to fight her back inside to save her kids.

On its face, this movie has all the hallmarks of a fun summer blockbuster. It has a storyline that can appeal to broad audiences, a unique premise, and a likable protagonist to boot. It’s also directed by James McTeigue, of V for Vendetta fame. Despite all of this promise, however, Breaking In is not able to succeed.

The problems start pretty early on in the movie. After they make it to the house, Gabrielle Union stands in the driveway with a glass of wine to make some phone calls. It is immediately clear that the shot was filmed during the day, but for narrative reasons it needs to be dusk. Rather than reshoot the scene, they just put a blue filter over the footage to make it appear as though night time is approaching. The choice becomes even more glaring when only a few scenes later we are plunged into absolute darkness, as though the sun has been down for hours.

On its own, this wouldn’t be so bad. Tack on the fact that much of the dialogue is a little week, and I’m still on board. This is a fun summer movie, after all. Much harder to ignore, however, are a few glaring errors in judgement on behalf of the creative team behind the film.

First, there is the problem of problematic casting. The villains in this film are three men who have learned about a stash of money hidden in the house, and like many similar movies we have a spectrum. On one end there is the guy who provided the intel, but doesn’t have much of a stomach for violence. He begins having doubts almost immediately, and is totally uncomfortable with the prospect of hurting anyone. In the center is the pragmatic leader, who is a smooth talker and willing to do whatever needs to be done for the score. On the far end, we have the loose cannon. He or she is usually a stranger to most of the team and as the story progresses it often becomes clear that this person is unhinged. They like the chaos, and they’re in it for the violence just as much as the payout. Utilizing a worn out trope like this is not the issue so much as how they cast it. The wild card character, named Duncan, is played by Richard Cabral, who does a fine job. The problem is with casting two white men as the co-conspirators, with a Latino man, covered in tattoos, as the dangerous one. It plays on and feeds racial stereotypes in a way that totally undermines a movie that gives us a beautiful, bad ass, black woman as our heroine.

The second, and related problem, comes in the film’s third act. After dispatching with two of the intruders, Shaun finds herself inside the home with Duncan, who is angry, and no longer has his compatriots to reign him in. He tells Shaun that he will kill her quickly, her young son too, but that when it comes to her daughter, he’s going to “have some fun” with her. When her daughter, Jasmine, enters the room to come to her mother’s aid, Duncan holds her against a pool table and tells her to just calm down and not to fight. The movie has more than done its work at this point to paint this character as diabolical, to tack on the threat of sexual violence, especially against a child, is not only unnecessary, but insensitive. Using rape, or the threat of rape, in media this way is lazy and we’re over it. Find a new shorthand for your antagonists.

I am all for more genre movies with female protagonists who are capable and relatable. I am here for more movies with Gabrielle Union. I am not here for Breaking In, though, as much as I wanted to be.

Beyond the Black Rainbow