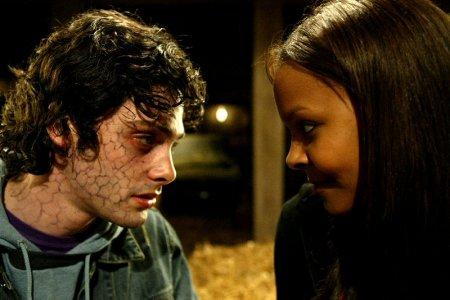 "Boy Eats Girl" is an Irish teen-comedy with zombies, costarring the Irish pop star, Samantha Mumba. If you're in any way still interested, by all means, read on.

When Nathan gets stood up by his crush, Jessica, on the night he was going to confess his love for her, Nathan gets really drunk and while playing around with a noose, accidentally hangs himself. However, thanks to his mom, who conveniently finds a book of resurrection spells in the church where she works, he is brought back to life. Nathan wakes the next day unaware that he has been brought back from the dead, thinking he only drank too much and passed out, and proceeds to go to high school as if it were any other day. Unbeknown to him, the book of spells is actually cursed and when anyone is resurrected using one of the spells, they begin to crave human flesh.

When he finally realizes that his insatiable hunger, crazy super strength, speed, and lack of heartbeat could be something more than growing pains, his mother confesses to him her secret, which he then realizes may explain why he also attacked and bit a school bully at the school's disco night. Feeling guilty, he runs to the cops, but they do nothing, taking his confession as a prank. Meanwhile, zombies are overtaking the town as Nathan's closest friends and love interest, Jessica, try to avoid becoming zombies themselves for a good 20 to 30 minutes as Nathan disappears from the screen. No need to worry though, he appears later for the ever predictable conclusion.

A movie where all the answers are readily available on the Internet or in an open book, this film doesn't take itself too seriously, but, I have to say, "Boy Eats Girl" would have benefited from an apple pie or a penis to stomach wound penetration. That is to say, it needed either something to push it over the edge into ridiculous territory, or for the filmmakers to take out the R-rated humor altogether and write an original storyline. Trying to be a teen comedy in a horror setting, the film fails on all fronts, being neither funny nor scary. Even the relationship between being a teenager and feeling like a monster, while harped on at the beginning, disappears after the setup and becomes typical and bland as we follow Nathan's two friends through town in search of safety and survivors.

While the film has some silly gore and a few laughs, overall it would only hold the attention of a preteen. That might be a problem however, because the gore is fairly heinous towards the end and wouldn't be suitable for anyone under fourteen.

If some of the gore was removed, the sexual references toned down, and the storyline and script amped up, this film would find a larger audience, but its too busy playing footsy with it's own dick jokes and fake intestines to move into something that could function as a gateway for a younger generation of horror fans. You know, the ones stuck between “The Nightmare before Christmas” and rated R-movies, who currently only have “Twilight” and “Prom Night” as fodder. And while “Boy Eats Girl” is better than both of those films, it is irritatingly diluted, deciding instead to wallow in the wasteland of overplayed teen comedy stereotypes.

The script contains a few zingers, but overall feels ungenuine, like writer Derek Landy hasn't spoken to a teenager since he was one. It's also fueled by coincidences and contains many unexplained plot points, such as, why does Nathan not turn into a full zombie, but instead remain in a sort of limbo state while all of the other zombie folk run around like the typical brainless zombies they are?

The most satisfying scene involves a delightful piece of farm equipment. You have seen it before, zombie vs. machine, but there never seems to be anything wrong with watching zombie body parts fly through the air. Even that scene, in all its bloody glory, doesn't have what it takes to save this film from being altogether boring. There is nothing here that would make you want to watch a second time, or even a first time for that matter. Released only a year later, “Boy Eats Girl” desperately wants to be “Shaun of the Dead: the teen years”, but that would require a much cleverer script and dynamic characters.