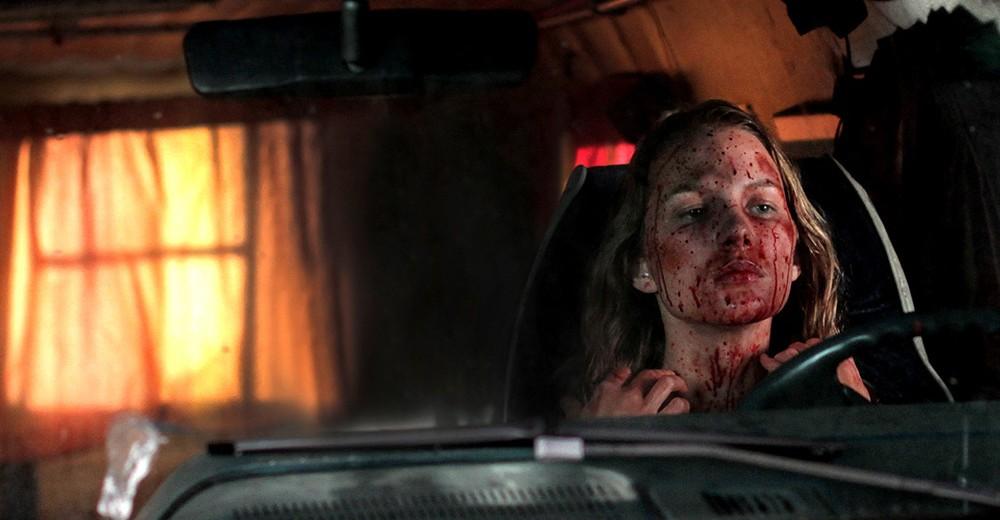 Revenge horror is a subgenre ripe with ambitious films – many of which tend to utilize the classics of the past as a crutch rather than inspiration. Revenge based films often revolve around a female protagonist whom is lucky enough to escape imprisonment by a hair brained mistake overlooked by her captor or is forced to find motivation to exact satisfaction from her own vicious attack. It’s a solid formula but not an easy science promising success.

Bound to Vengeance follows its predecessors outline and opens with an attractive and young blonde girl, Eve (Tina Ivlev,) chained to a concrete floor by her foot. As her captor, Phil (Richard Tyson,) brings her food tray and sits down beside her on a worn and dirty cot. As he is trying to sweet talk her into eating the soup he made special for her – she bludgeons him with a brick, unchains herself and in turn chains him. Now free, Eve rushes through the house searching for an exit. As she rushes through the front door, she realizes they are in the middle of nowhere. Desperate to flee, Eve returns to the house in search of the van keys and in turn finds photos of several other girls who seem to be held prisoner much like her. Cleverly fashioning a control pole, she lassoes Phil and demands he take her to free the other girls. As they set out on Phil’s usual route of torture on demand, Eve soon realizes that not all the girls she intends to free are wanting of her help nor are the others involved in the ring, grateful for her tenacity. The deeper Eve digs into the underbelly of human trafficking, the less she can hold on to what she thought she knew.

Though the film does suffer a few hiccups, mostly with strangely delivered exchanges between characters and a loosely, nay underdeveloped, backstory, Bound to Vengeance is a refreshing addition to the revenge subgenre. Eve’s character is not developed by her ability to free her self or endure whatever hell awaits her in the basement, but rather her empathy for the others and her will to succeed in her goal to rescue them at whatever cost necessary. Complex yet decisive, Eve pummels through anyone in her way without second-guessing herself or the violence she utilizes. The bullets fly with stolid dedication, lacking the needless crying and guilt that we often see accompanying them. Jose Manuel Cravioto directs the film with raw abandon that lingers even after the scene ends. With a bit of a twist to satisfy and a soundtrack that adds a little satirical humor to the mix, Bound to Vengeance is rocky road paved by a femme fatale.