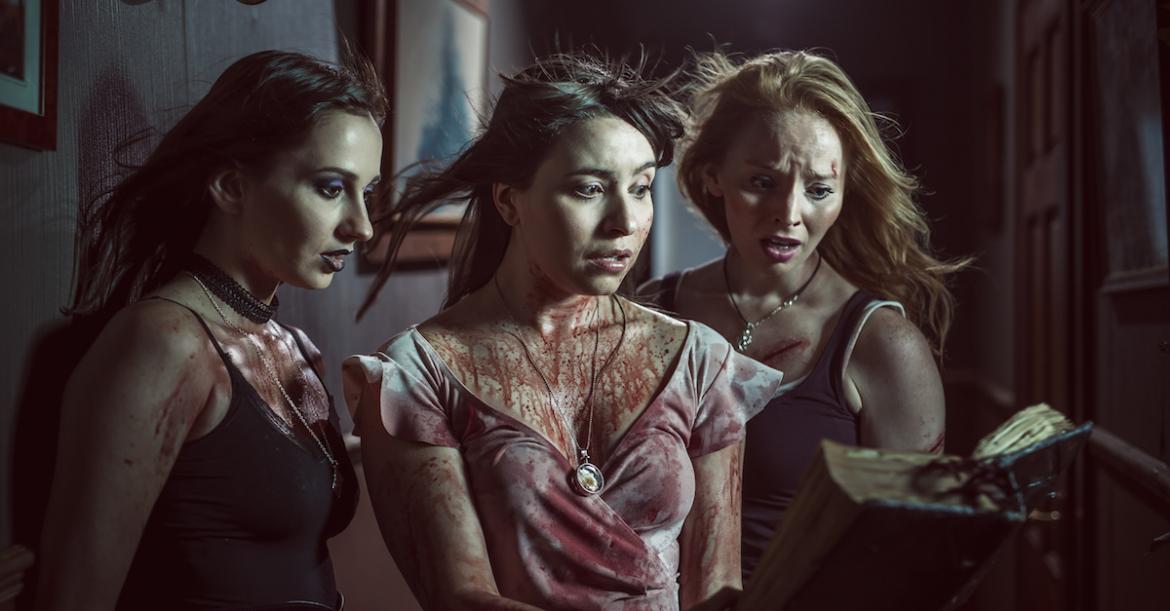 Kickstarter has increasingly become an outlet for indie filmmakers to 1) get a project funded and 2) engage an audience with their work. For all the faults in Book of Monsters, and there are many, the filmmakers embraced their audience-backers and for better or worse delivered a film that does feel like it was made for "the people."

The premise is quite simple. Sophie's (Lindsey Craine) birthday becomes an all-you-can-eat buffet for a slew of monsters unleashed by, you guessed it, a book that her mom somehow acquired and inexplicably kept around for her daughter's bedtime stories as a kid. The film doesn't really wrestle around with logic at any point because, well, it gets in the way of all the mangling of flesh at the hands of some pretty cool monsters. Similarly, the film doesn't dig too deep into narrative or character development since, again, it distracts from the fun of the abundant practical effects.

On the surface Book of Monsters can be summed up as a combination of Feast and Evil Dead; a mysterious book conjures up monsters looking to complete some form of ritual that lay siege on party-goers within a house. With the context of its Kickstarter campaign you can see the threads of a choose your own adventure and it shows in the final product itself. The editing often feels messy, with abrupt sound cues and cuts resulting in inconsistent mixing. Certain viewers will notice the seams which speak to technical flaws, whereas most will be none the wiser and enjoy the carnage.

Backers were able to dictate several very specific aspects of the movie including the monsters that show up, additional party guests, specific kills, even the mysterious gift given to Sophie. It's a very cool idea that when seamlessly executed could be an interactive and immersive experience for fans, but the film often feels beholden to a shrewd outline that doesn't allow for much depth. As the film progresses it feels more and more like the filmmakers checking things off a grocery list, and like most grocery lists, not everything is for the same recipe and some of it is not a necessity. While the film has all the makings of a fist pumping cheer fest for gore hounds, the end product seems slapped together. Переходи по этой ссылке, чтобы смотреть инцест онлайн xn--e1afprfv.tv в хорошем качестве. Здесь показано лучшее инцест видео с самыми возбуждающими сценариями.

Book of Monsters is very much a throwback monster movie complete with loads of practical gore effects and creature designs. However, the film's technical flaws and lack of a deeper sense of mythology results in a concept that feels rushed and underdeveloped. The flick still feels right at home with a midnight crowd of boozed up gore hounds.