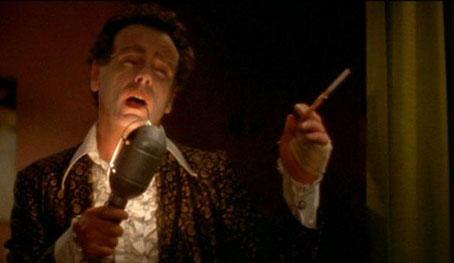 What can I say about David Lynch’s “Blue Velvet” that hasn’t already been said by hundreds if not thousands of film scholars, critics, biographers, and journalists? The film has been discussed in a diverse number of concentrations including auteur studies, queer theory, genre studies, and psychoanalytic film theory. It has been viewed as both an intrepid piece of personal vision and an exploitative aggrandizement of cinematic masturbation. In the quarter century since its original release, “Blue Velvet” has become one of the most exemplary if not one of the most discussed pieces of 1980s American cinema. On a personal level, “Blue Velvet” was one of the first films that took me outside the bubble of considering movies as “just” entertainment, pushing me to ask questions not only of the film but my reactions to it. Indeed, Lynch has crafted a work that is both confrontational and enticing, a potentially timeless film that if you have not seen you truly should expose yourself to it. At its most basic narrative “Blue Velvet” is a detective story with roots in classic film noir. Set in the Rockwell/Capra-esque town of Lumberton, USA, (“glamour in the pines!”) the film centers on Jeffery Beaumont (Kyle Maclachlan), a college student who returns home after his father suffers a stroke. Walking through a field after visiting his incapacitated father, Jeffery finds a decaying human ear. Jeffery hands the ear over to the police and with the help of a detective’s daughter named Sandy (Laura Dern), Jeffery begins investigating the ear’s origins. This leads him to the apartment of a local lounge signer named Dorothy Vallens (Isabella Rossellini). Jeffery learns that Dorothy is being blackmailed by a volatile group of local criminals led by the perverse Frank Booth (Dennis Hopper). Soon after, Jeffery finds himself in a delirious carousel of events that blend together his fantasies and nightmares, creating an assaultive and alluring kaleidoscope of sound, images, and sensations. To provide a plot synopsis of “Blue Velvet” is a bit like trying to describe your first kiss or sexual experience. You can relate the physical gestures, setting, and situation but you can’t describe the lived presence of all that sensual weirdness. That moment has the ability to be simultaneously novel and yet familiar; a fulfillment of a long considered desire that is impossible to replicate. This is the cinematic space that “Blue Velvet” creates. Where the film finds it’s footing is in Lynch’s juxtaposition of the imagery and sounds of a particular type of small town “Middle America” with the violent, unwavering representations of graphic violence and sexuality. Each of these is “real” for us only in their blatantly constructed natures. Certainly the derivative quality of the narrative further enhances this, playing out familiar tropes in order to give us ground only to be dissolved under foot with the assaulting desires and actions of the characters. For some critics, these images and sonic cues are indicative of how shallow “Blue Velvet” is as a film, existing as surface without sub-text. But the film isn’t about showing how the thin veneer of Americana covers and hides the more sinister impulses of its inhabitants. Rather, Lynch seems more concerned in revealing how the more sinister impulses are part and parcel to our daily lives. The film opens on a brief sequence of picket fences, roses, a television set, and pristine yards. We watch as a man (Jeffery’s father) waters a garden, yanking at the hose to untwine a kink in it. Suddenly he jerks back, falling to the ground clutching his neck as a small terrier attacks the spraying hose. The camera pushes into the grass as the music fades and the loud din and crunch of insects fills the soundtrack as we end on a close-up of swarming beetles. Throughout the film moments of sexual pleasure, expressions of love, or violence are interrupted with brief montages in which we watch earlier moments of these occurrences all inter-cut with one another; each but a piece of a larger collage. When meeting at a diner with Jeffery, Sandy tells him that she can’t tell if he is a “detective or a pervert.” The distinction here being that Jeffery is neither of these and both of these. Much like the film itself, Jeffery is a character that embodies each of these worlds and bridges them together. Now MGM Home Entertainment has released a 25th Anniversary Blu-Ray edition of the film. Having owned a few previous versions of the film, I can say that the picture and sound really have never been better for home viewing (and no, I am not on MGM’s payroll…yet). The gradients of blacks and the precision of the color palette is pretty incredible. Most of the special features are carryovers from the previous 2002 Special Edition release including the “Mysteries of Love” documentary, the 1986 “At the Movies” review with Siskel and Ebert, some trailers/tv spots, and some vignettes. New features include some outtakes and an additional 50 minutes (!) of “lost” footage. It should be clarified that this footage isn’t like a “missing reel” or an alternate ending but is footage that was excised from the film entirely and has only recently resurfaced. Unfortunately the footage isn’t accessible as particular scenes but must be played in its entirety, strung out in a long montage of sequences. While it becomes apparent why much of the footage was deleted, it’s always a pleasure to see a touch more strange from Lynchland…including a scene in which a woman lights her nipples on fire. That’s right. What becomes increasingly apparent with each viewing is how curiously new “Blue Velvet” seems every time I watch it. It is a film that is first and foremost about the ways in which visual and aural textures can play upon us as an audience. Indeed, “Blue Velvet” endures because it strikes a balance between its narrative and allowing the viewer more conceptual space to bring our personal lives into the film’s world and vice versa.