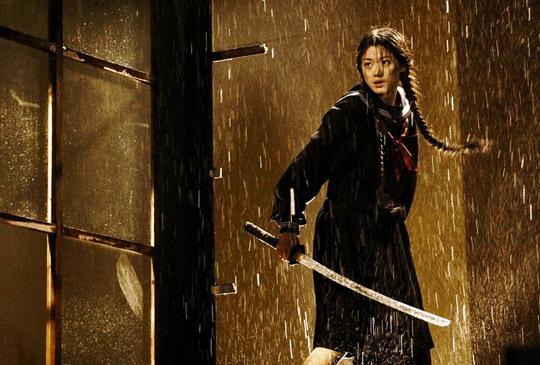 The "swordplay and vampires" subgenre, as intriguing and ripe with potential as it may be, has produced some very strange cinematic fruit, ranging from the impressive (Guillermo Del Toro's superior sequel "Blade 2") to the phenomenally awful (Ron Hall's abysmal "Vampire Assassins"). You’d think executing this sort of basic formula would be simple: introduce the blood-suckers, toss in a non-gender specific hero who’s proficient in the ways of martial arts, and let the rest take care of itself. Judging from the handful of films brave enough to tackle this subject matter, it’s apparently not as easy as you’d initially think.

“Kiss of the Dragon” director Chris Nahon’s gory 2009 vampiric actioner “Blood: The Last Vampire,” while sporting several beautifully choreographed fight sequences, is, overall, surprisingly weak and entirely emotionless. The absence of tension and energy throughout is disappointing, as both are required to make this sort of mindless entertainment operate smoothly and efficiently. Nahon may be a gifted action director, but his inability to craft a snappy, coherent story that doesn’t crumble under its own pretentiousness is definitely a problem. I’m not asking for mind-warping displays of genius, people -- I’m just looking for swords, vampires, and a plot that isn’t needlessly complicated and, more importantly, indescribably boring.

To be perfectly fair, I have no frame of reference. I’ve never seen the anime on which this live-action adaptation is based, and I’ve never cracked a spine on any of the mangas. Maybe all of the characters are supposed to be hollow and disposable, the storyline cheesy and illogical. Maybe I’m supposed to suspend disbelief when two high school girls mysteriously vanish from a military base and nobody seems to care. Regardless of its intent, the material doesn’t work very well on the big screen, even if I were to approach it as a campy, action-packed B-movie. Had Nahon not presented the material as serious business, maybe this wouldn’t have been an issue.

The story itself is inherently goofy to begin with: During the Vietnam War, half human/half vampire Japanese assassin, working in conjunction with a corny covert government organization, goes undercover as a schoolgirl at a US military base in Japan to locate the world’s most powerful vampire. And, as always, the elite vampires who inhabit this universe are portrayed as uppity socialites who are never two steps away from a wind machine permanently set to “stylish.” The whole blood-spattered affair is so impossibly silly you’ll wish Nahon and company had decided to take the story in an easier, more light-hearted direction. It’s a shame, really, as Gianna Jun make for an interesting action heroine. Watching her cut people in two never gets old.

“Blood: The Last Vampire” does have a few redeeming qualities. The fight scenes, in particular a sequence I’ll call “rainy day swordplay in a twisty alleyway,” are simply a blast to watch. Iconic Hong Kong filmmaker Corey Yuen’s work is always impressive, even when Nahon’s direction gets in the way. That said, the film still gives you plenty of dismemberments, eviscerations, flying body parts, and gravity-defying kung fu to stare at, more than its slender 90-odd minutes are able to contain. For its inevitable DVD release, perhaps Nahon will give us an extended limited edition two-disc director’s cut that fleshes out some of the wonkier bits and add some much-needed substance to the picture’s storyline.

As it currently stands, the movie is a mess. Even if you overlook the bad and blindly accept the good, you must admit there’s something off about “Blood: The Last Vampire.” It’s not nearly as gleefully enjoyable as like-minded action/horror gorefests “The Machine Girl” and “Tokyo Gore Police,” and it lacks the intensity of Nahon’s previous efforts, especially the 2005 thriller “Empire of the Wolves.” For an action film that boasts a number of visually engaging martial arts sequences, “Blood: The Last Vampire” almost put me to sleep. And when you’re watching a movie that prominently features a Japanese schoolgirl slicing and dicing her way through packs of ugly blood-sucking freaks, dozing off is never a good sign. Ever.

Fist Of The Vampire