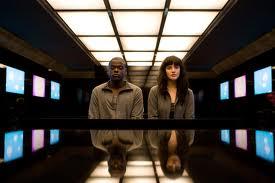 For quite a few years now, we’ve been in a bit of a dry spell for sci-fi/horror anthology TV shows. After the X-Files figured out how to do “monster of the week” episodes right by taking the gonzo novelty of an anthology show and grafting on a set of recurring lead characters, the anthology has largely been unfairly cast as a dusty old relic of television past. Luckily, this is a brave new world of TV we’re living in, where geographical borders don’t matter and the old US network model of 23 episodes and as many seasons as possible is no longer arbitrarily seen as the only way to make a television show. Thanks to the social revolution wrought by modern technology, a UK-based show like "Black Mirror" can gain an audience in the US even though it hasn’t been given an official release.

That disconnect is appropriate because tech-induced dichotomy is what "Black Mirror" is all about. (If you’re wondering what the name “Black Mirror” refers to, here’s a hint- you’re staring at one right now.) The settings for the three Series One episodes veer from the familiar to the far-off future but they all pick at the common thread of how technology has affected the way we behave and interact with one another. The series was written by satirist Charlie Brooker who explored similar themes in 2009 with his zombies-in-the-Big-Brother-house show “Dead Set”.

The first episode, “The National Anthem”, has a premise that is so incredible and audacious, yet head-slappingly simple, that it is almost certainly guaranteed a future “you gotta see this” status. A member of the royal family has been kidnapped and the kidnappers’ only demand is that the prime minister, ahem, perform an indecent act with a pig on live television. It sounds like the beginning of a dirty joke, and it’s easy to take it that way at first, but the show doesn’t pull any punches and plays this situation exactly as it might play out in the real world. As the humor of the situation turns to horror and becomes more real, the giggles give way to revulsion and pity until the end of the episode when it becomes clear that the interaction between the PM and his wife is more cringe-worthy than the one between him and the pig.

“The Entire History of You”, the final episode of the season, combines the relationship drama of the first episode with the sci-fi angle of the second. It takes place in a world where everyone has a device implanted behind their ear which records all their memories. These memories can later be played back for that person or broadcast on a screen to share with others. After a bad performance evaluation at work, a young lawyer goes to a dinner party where he meets an old friend of his wife’s. He feels a tinge of jealousy and suspicion at some of the old friend’s comments and after the party obsessively replays moments, trying to decode his wife’s behavior. He becomes increasingly unhinged and eventually confronts his wife and her old friend with the sordid scenario he has built up by dissecting every comment and action from the party. Once again, things don’t go well.

The technology in “The Entire History of You” is a clever stand-in for the way Facebook can preserve memories and moments externally. With its constant stream of pictures and status updates both new and old, it’s easy for the jilted or the jealous to scan Facebook pages looking for a pattern, picture or secret message that confirms their worst fears. All of a sudden that sci-fi conceit doesn’t seem so farfetched. God help us if Google Glass ever takes off.

Good sci-fi uses far-out ideas to comment on the present and that’s what “Black Mirror” does the best. A cursory glance at the synopses of the stories makes them all seem safely off in the realm of speculative science fiction, where we can comfort ourselves with the thought that it’s all make believe and we’re just indulging in a little harmless conjecture. The truth is, that while these particular settings might never exist and the technologies might be as improbable and fantastical as Capt. Kirk beaming up to the Enterprise, the concepts behind each of these stories are very real and are things we have to deal with every single day. Technology is advancing faster than society and we have to fumble our way through every day as we try to write the rules for this strange sci-fi world we’ve built for ourselves. Every now and then it’s a good idea to take a look in the mirror and take stock of what we see.