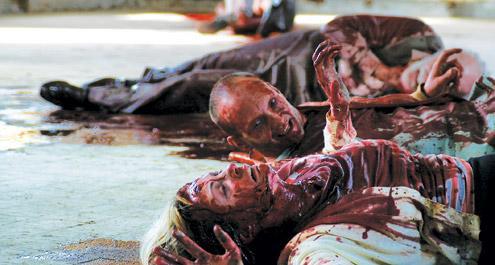 I have very mixed emotions regarding "Broken" co-director Adam Mason's 2006 visceral mind game "The Devil's Chair." On one hand, I applaud Mason and co-writer Simon Boyes ambitious approach to the "group of individuals wandering aimlessly around an abandoned structure" routine, a genre which, for reasons I cannot readily explain, never fails to amuse me on one level or another. However, on the other hand, I'm not a very big fan of a particular storytelling device they've employed here, a gimmick that, while surprising, feels cheap and a little shady. Perhaps it wouldn't have been quite so obnoxious had the narrator not smugly rubbed it in my face. I'll stop there to before spoilers begin uncontrollably bubbling out.

Things get ugly when the device suddenly springs to life, ensnaring poor Sammy by inserting a variety of sharp objects into her wrists and neck. Nick, meanwhile, continues his adventure down the Electric Kool-Aid highway as his terrified girlfriend bleeds out all over the room before abruptly disappearing. Since nobody else was around to witness this madness, the authorities pin the crime on Nick and toss him into a cell deep within the nearest mental hospital they can find. Did some sort of otherworldly power transport Sammy to another dimension, or is all of this gore-soaked nonsense a by-product of the substance they'd consumed beforehand?

Stepping forward to answer this perplexing question is the famed Dr. Willard (David Gant), an aspiring author who would love nothing more than to base his first literary endeavor on Nick's very unusual case. The good doctor's prescription: Send the patient back into the abandoned asylum and force him to retrace the steps he took on that fateful day. With much trepidation, West agrees to this risky psychological experiment. Tagging along for the ride are Willard's curvy assistant, one impossibly irritating British videographer, and a naive psychology student who seems to have a thing for the clinically insane. сайт

It's around this point that "The Devil's Chair" grinds to a screeching halt. After a spectacular pre-credits assault on the senses, the film sort of loses its momentum. Increasingly goofy conversations, combined with a few bothersome characters and some cheap, unnecessary CGI, drag the picture down by undermining its strengths. And while the last ten minutes are savage enough to forgive these valid complaints, the unexpected twist, along with the genre-related rant that accompanies it, may prevent touchy viewers from enjoying the film's blood-encrusted finale. It's a "bite the hand that feeds" moment that doesn't really work that well.

That said, Mason's direction is more than capable, and his cast does a fine job with their respective parts. Character actor Andrew Howard, meanwhile, is easily the picture's centerpiece. His Robert Englund-by-way-of-Jason Statham performance is genuinely engaging and always sharp, even when his narration consists of crude one-liners and monosyllabic observations. His natural charisma and gnarled voice help keep you interested when the silliness is amped up beyond normal levels for human comfort. Sometimes an anchor, be it an actor, stylish direction, or a smart script, is required to keep audiences from drifting away. Howard is, in other words, a bald tube of super glue.

Even after dissecting my notes and rethinking certain aspects of Mason's gory feature, I'm still not sure how I feel about "The Devil's Chair." There's an uncanny intelligence that runs through the entire film, even during those moments in Mason and Boyle's script when it appears they have no idea what they're hoping to accomplish. The twist, I'm afraid, will be the deal breaker for many intrepid viewers; having an untrustworthy narrator is one thing, having him laugh in your face is another. Perhaps the filmmakers found themselves painted into a corner. Perhaps it was an ill-conceived experiment that never came to proper fruition. Whatever the case may be, it definitely tarnishes what could have been one incredibly unsettling experience.