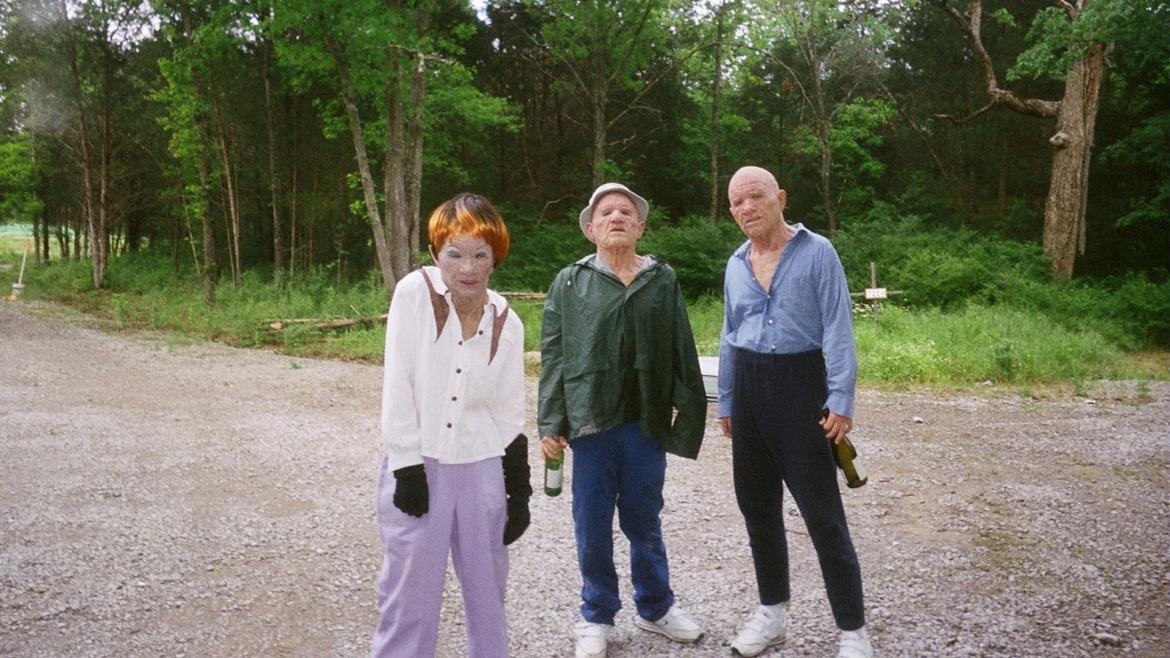 Beautiful, disparaging, vulgar, transcendent, fatuous, and recondite; Harmony Korine’s “Gummo” persists as one of the most challenging and infuriating works of American cinema in the last two decades. For those who haven’t seen it the film fuses contemporary post-apocalyptic aesthetics with mockumentary, documentary, and exploitation to non-narratively detail the real world horrors and triumphs that unfold in a small Midwestern town devastated by poverty. And that doesn’t even begin to describe the feeling of watching “Gummo”. To those who feel they suffered through “Gummo” the idea of allowing Korine to host a tour of the indigent corners of the American South sounds like inviting a stiff-arm to the esophagus. “Trash Humpers”, the director’s latest feature length experiment may not be a full-fledged forearm shiver but it is every bit as challenging as “Gummo”, in this case however, it not only for reasons of distaste but ennui as well.

The title “Trash Humpers” is truth in advertising. It is also a grimy metaphor for a culture bereft of permanence; one that fashions people who are reliant on base activities to fill meaningless canyons of time and space. The film follows four people in “Little Big Man” elderly make-up as they wreak havoc on the streets and shanties of Nashville, TN. They smash televisions and fluorescent light bulbs, lay waste to abandoned houses and sexualize virtually every object they come across. The group jerk-off plant stalks, ogle and catcall fire hydrants and discarded toilets, and of course pump their pelvises interminably against every trash bin they encounter. When they aren’t molesting defenseless rubbish they’re cavorting with chunky hookers and psychotic 10 year olds. Eventually they move on to murdering other wayward souls who wander into their path.

During the moments of inertia that entrap this lively band of pandemoniacs, a sense of inextricable alienation pervades their lives. They strive to keep the mayhem going so that their place at the margins of society doesn’t manifest in the kind of horrendous sadness and longing that might be expected. For the most part they are successful in fustigating their woes and supplanting sorrow with chaos. But when the lone woman in their group comes upon an infant, a buried instinct surfaces and her place in their violent universe seems as though it may change.

The first thing you should consider before diving into“Trash Humpers” is whether or not you have HD adapted sensibilities that will make it difficult for you to watch a muddy film shot on a Paleozoic VHS camcorder. The shooting choice is deliberate but for those who belabor missing details in a picture this movie may well drive you crazy. That’s not to say that those who are not quality sticklers are out of the woods with this film. “Trash Humpers” features some of the quirky asides of “Gummo” but mostly the characters and themes are built through watching their unending party video devolve into the monotony of lawlessness and privation. The dialog is sparse and often unintelligible. And despite a darker Jackassian styled subversiveness, the amusing novelty of watching people in old-face smashing and fucking everything they see wears thin well before the film can afford to have that happen.

I am a Korine believer. “Gummo” is one of the most disquieting, vital and impressive films I have ever seen and it continues to inform my ideas about cinema as a medium of white lies that reveal a greater emotional truth. Harmony’s (at times) unabashedly self-indulgent hand almost always seems to keep a finger pointing the viewer in the direction of a theme. When that isn’t true I often find that the self-gratification he chases possesses a perverse entertainment value that rewards as it simultaneously elicits feelings of guilt. “Trash Humpers” has many of the qualities that have endeared the filmmaker to me; it is elusive and lyrical, playful and provocative.

My problem with “Trash Humpers” is that it doesn’t go far enough with its havoc or character sketching to be consistently interesting. It also suffers because unlike “Gummo” the sense of place is sturdy but it isn’t a full-fledged player in the proceedings. The tenebrous alleys and vacant parking lots of Nashville have a mood but it never quite oppresses to the same degree that the crippling ghettos of Gummo’s Xenia, Ohio (incidentally, also shot in Nashville) seemed to. For lovers of all things HK this will be a must. For fans of extreme cinema seeking the kind of experience evoked by the director’s name (i.e. “Gummo” , “Kids”, “Ken Park”, “Julian Donkey Boy”) or the title of the film, I fear it will fall short of expectation. It did for me. No matter though, I am sure Mr. Korine will continue to produce fantastic, divisive works of beauty and depravity. With that in mind if you haven’t seen his short “Act Da Fool” that is available for viewing online, I would recommend spending four minutes on that and skipping “Trash Humpers”.