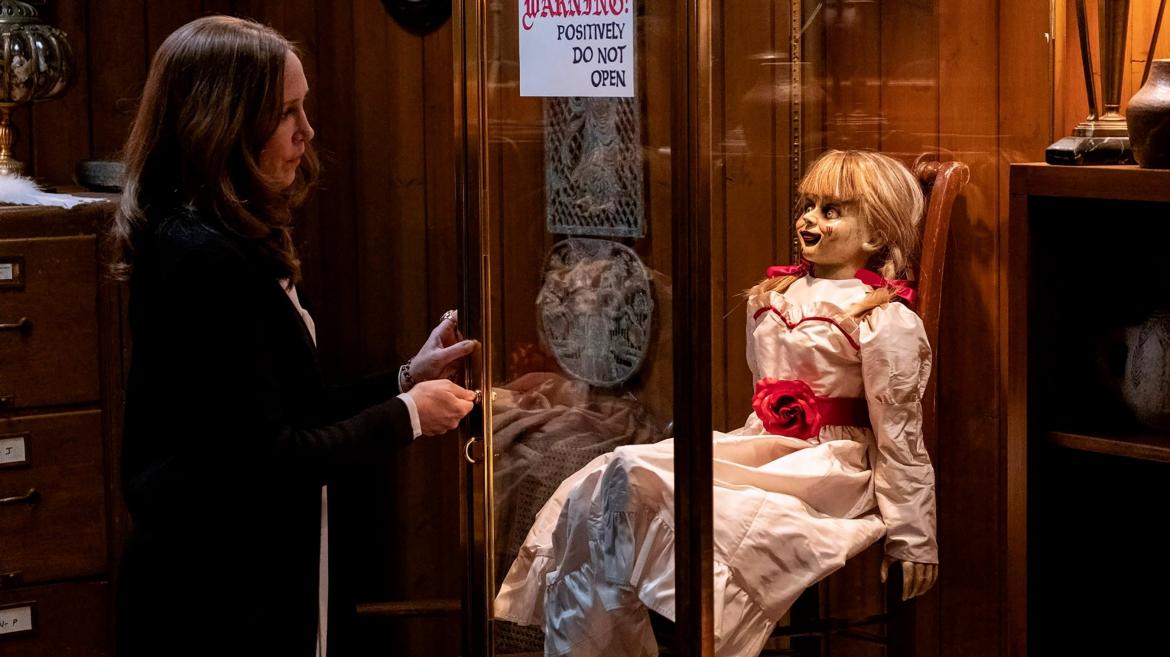 If you’re anything like me you’ve had this nagging question in the back of your head since the release of The Conjuring in 2013. What’s with that Annabelle doll? I sure wish she had her own franchise. I need to know her story! If you’re like me, you were overjoyed (please note the continued sarcasm) when just one short year later, she got her own movie. Then, in 2017, she got another one! But, we needed more and of course the Wan-iverse obliged. So this year we got the final chapter (?) in a story that never needed to be expanded upon in the first place, Annabelle Comes Home.

The film features the titular doll, though not as much as you’d expect. I wager she was too busy taking bikini selfies so they tried to write the script around her busy beach schedule. This movie opens the same way that the original Conjuring film did, with Ed and Lorraine Warren’s first encounter with Annabelle. Only this time the story is extended. We get to watch them drive home with the doll, strapped in and sitting upright in the backseat. We ride along as Lorraine doses off and Ed gets lost. It is on this long drive home, however, that the pair discover that Annabelle is a beacon. The doll is like “a lighthouse” Lorraine says, that draws spirits.

Fast forward several years and the Warrens are still up to all their old tricks. And they still have a creepy room full of cursed objects, safely kept under lock and key. That is, until they leave their daughter with a reliable babysitter (think Laurie Strode), whose troublemaking friend comes over and accidentally lets Annabelle out. The girls (and the neighbor boy) spend the foggy night trying to survive an onslaught of creepy spookies as they try to get Annabelle back in her box.

In a franchise that relies heavily on jumpscares, this film stands out. The “thrills” are cheap and there is no real plot or character development to help prop them up or smooth out the rough edges. The film is also lacking any interesting or novel set pieces, which even some of the sillier Wan-iverse films have been able to turn out.

Much of the film’s runtime ends up feeling like walking through a very low budget haunted house where no one really cares all that much whether or not you’re scared, so long as you paid the price of admission. There are moments between Judy Warren and her two teenage caretakers that border on tender, but never quite make it there. We don’t really get enough time with any of them to care much about whether or not they get out of this scrape unscathed.

Whether you're a diehard fan of the franchise, or you're hoping for some silly bad horror, Annabelle Comes Home is almost guaranteed to disappoint.