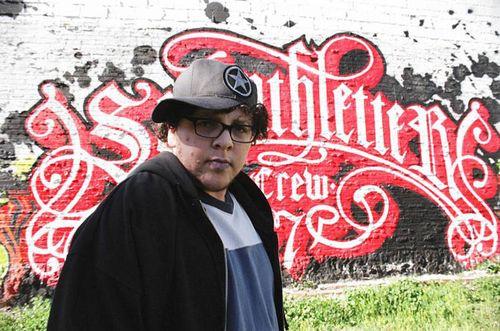 Zombies walk among us, shop among us, scrapbook among us, and in some cases have cat allergies among us. There are advocacy groups and centers of study devoted to education about the ‘living deceased’ and who outreach to those who are part of this marginalized population. This is the universe of “American Zombie”, a mockumentary that follows two filmmakers who are trying to make a documentary about the underground ‘revenant’ community in the greater Los Angeles area.

The two filmmakers though attending the same film school, have taken very different paths career-wise. Initially when John approaches Grace about the project she is hesitant to leave her niche as an award winning documentarian to tackle the subject of the living dead. Eventually the project is launched but it is apparent very early on that the two have different ideas about what a zombie documentary should capture. Grace wants emotional portraits of those afflicted with the condition and John wants to know more about diet and bodily functions.

The zombie subjects that John and Grace follow are a collection of average Joes and Janes or more correctly Zoes and Zanes and they are in varying stages of acceptance about their circumstance. Ivan is a 20 something zombie who works at a convenience store and uses his zombie status to attract the opposite sex. Joel is a zombie activist who is working to change the perceptions and conditions of zombie life. Lisa works as a floral designer and in her spare time creates beautiful, “representational” works of string art. The final subject is Judy, the aforementioned scrapper who is looking for love and a life that doesn't involve zombies.

John and Grace start with a day-in-the-life styled approach to their portrayal. Each character is introduced and their habits and dreams are revealed. Almost immediately John feels that despite being given a great deal of access to the lives of the four zombies the crew is missing the meaty details. He and Grace argue repeatedly as John tries to push for information about the zombie flesh craving.

The crew catches a break when they are invited to attend an annual, zombies-only gathering called “Live Dead”. At first the festival appears to be something like a Zom-Burning Man. But after one raucous night John suspects something more sinister is afoot. As they begin shooting on the second night of the festival they are chased off by the organizers and told that it is for their own safety. They sneak back in and capture what appears to be a living woman being transformed into a living corpse. The filmmakers make a hasty retreat and return home to L.A. to complete the documentary.

“American Zombie” is a well made and well acted film. It does manage to hit upon all the tropes of documentary filmmaking and plays a convincing game of trickery on those willing to go along for the ride. Perhaps it’s more correct to say those willing to go along for the walk. For a while the film does manage to impersonate a documentary admirably it never quite goes far enough in either humor or horror to give the viewer a fully satisfying ride. Некоторые молоденькие девушки не могут отказать в сексе парням, которые нежно лижут и мастурбируют их письки. Очень часто этими парнями являются братья, с кем происходит инцест. порно с братом вы можете с легкостью посмотреть на нашем сайте. Тут только самые стройные девушки отдаются молодым парням во все дырочки в самых откровенных позах после орального секса с ними.

The threads of social commentary are certainly big strengths of the film. The estrangement and alienation of the disenfranchised and the effect of those phenomena on the individual are poignantly addressed in the stories of Judy and Lisa. Additionally, the Joel character is a passionate user sublimating his inadequacies into pipe-dream megalomania.

The actual and fictional director Grace Lee, who plays a facsimile of herself in the film, has managed some good things here. The details of ‘revenant’ life have thought put into them and there are some nice touches of comedy sprinkled throughout. The second night of the festival is chock-full of anxious moments and is easily the creepiest and most effective part of the film.This makes it all the more disappointing when the narrative takes us back to L.A. to wrap up. Had the film chosen a cannibal holocaust styled ending for its crew we might be talking about a truly unsettling climax to a remarkably measured and restrained movie.

Strengthening my wish that the denouement had taken place at the festival is the fact that the last act is the weakest portion of the film. This is puzzling since we finally get from the movie what we had been waiting over an hour to see, namely some zombie related carnage. Again the scenes are well shot but the pacing here is poor. What should be unsettling, like a family pit bull mauling a child, instead feels like a contrived endpoint, happening in the wrong setting, 10 minutes too late.

Another area of complaint is with the comedic aspects of the picture. John Solomon has really nice dead pan uncouthness. His intrusions and slipshod journalism create the best moments of comedy in the movie. Unfortunately, it is used so sparingly that “American Zombie” isn’t able to reach the level of most of the memorable comedic mockumentaries. In fact, the movie abandons most of its immediate humor in the last act opting instead for darker and more ironic forms of levity.

Obviously “American Zombie” is a mixed bag. What makes it hard to recommend is that the things that are working are either under-utilized or they are not a major draw where zombie movies are concerned. In the end, the truly disappointing part is that you can see all the spots where it had the chance to be a marvel of complexity and wit, but the filmmakers chose to go in a different direction.