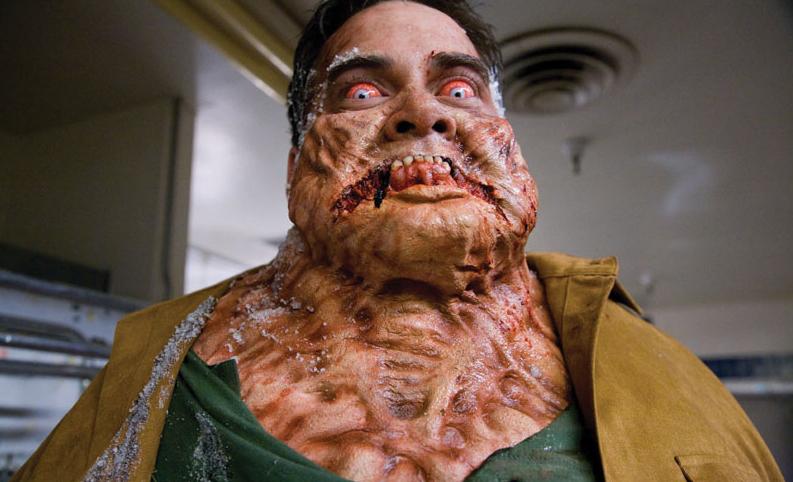 Everybody knows that books and their covers should be judged separately. The same goes for movies and their titles. Just look at “Snakes on a Plane”, maybe the only film to have a cult following before it was released based almost entirely on the title. Of course, once people actually saw the movie that cult following pretty much entirely disintegrated. It was just last year horror fans learned that every single time any man, woman or child hears the title of “Midnight Meat Train” for the first time they are uncontrollably compelled to make a gay porn joke. The latest loser in the awful title sweepstakes is Ben Rock's feature debut which bears the Sci-Fi Channel-tastic title of “Alien Raiders,” a name which inexplicably won out over the decent (if somewhat generic) working titles of “Inhuman” and “Supermarket”.

Even worse, the title is only half-accurate. While there are aliens a-plenty in the movie, Mongols and WoW players will be disappointed to learn that little to no raiding actually occurs. The film takes place in a supermarket in rural Buck Lake, Arizona. A few days before Christmas a handful of employees and shoppers are going about their business when a group of masked gunmen burst into the store.

They corral the shoppers together as a wild-eyed drug-addict who the gunmen refer to as their “spotter” dashes from person to person, looking deep into their eyes to decide who to spare and who to kill, seemingly at random. One of the shoppers turns out to be an undercover cop and a firefight ensues, with the spotter getting killed in the crossfire. Now the supermarket invasion turns into a hostage situation as the remaining supermarket patrons are subjected to a series of bizarre “tests” and bit by bit we begin to piece together what exactly the gunmen are up to.

When we do find out what is happening it becomes clear that the story behind “Alien Raiders” treads familiar territory. If you imagine “The Thing” transplanted from an Antarctic base to the supermarket setting of “The Mist”, you've got a pretty good idea of what to expect. The clever twist of the screenplay isn't in its content, but rather in how it tells its story.

Instead of following the hero characters from the beginning and going through the standard stages of seeing a few early victims, identifying the alien menace, convincing others of the existence of the threat, developing a way to test people for infections and finally staging a desperate, bloody last ditch attempt to save the world, we instead see the film from the perspective of an innocent bystander who only sees crazy people with guns forcing them to do strange things like chug cartons of milk. It's a change in perspective not unlike what “Cloverfield” did for the giant monster movie. This has the added advantage in that it begins with what would normally be the climactic third act of the film, when the alien has escaped from the scientific facility into the general population. Taking a background character's point of view makes what could be a predictable, cliche-ridden film into a fresh and exciting retelling of a familiar story.

For the most part, the film assumes that the viewer has seen a few sci-fi/horror films and large chunks of the back story are only alluded to, trusting the audience to fill in the blanks on their own. In fact, the biggest flaw of the movie is that the final twist, which is clearly meant to be a surprise, underestimates the viewer and is fairly easy to predict early on in the movie by anyone who has any experience with sci-fi/horror films. Aside from this minor lapse in judgment, the film gets big points for putting enough faith in its audience to allow them to connect the dots for themselves. It's post-modernism done right – instead of holding the viewer's hand and leading them through plot points that they've most likely already guessed, a line or an image here or there is enough to let the viewer piece together what must have happened before the movie started.

Rock, a former special effects make-up artist, makes excellent use of his tiny budget with nice-looking practical alien splatter effects, digital video that looks passably film-like, and a cast with no big names but plenty of recognizable faces from television. Carlos Bernard from “24” plays the leader of the hostage-takers and for much of the movie seems to be doing his best Jack Bauer impression, which is not necessarily a bad thing. Mathew St Patrick, best known as gay cop Keith Charles on “Six Feet Under” plays a hostage negotiator (whose step-daughter happens to be one of the hostages, natch) who is called in to settle the situation but ends up joining the “raiders” against the alien threat. Low-budget filmmakers take note – a side effect of the upswing in quality TV series is that there are a lot of capable TV actors who might not be as well-known but can carry a movie just as ably as bigger names.

“Alien Raiders” might be a low-budget straight-to-DVD affair with a title that's surely going to cause plenty of people to pass right over it, but it manages to be more entertaining than scores of movies with exponentially larger budgets, bankable stars and worldwide cinematic releases. While it's far from revolutionary, anyone looking for a fun beer and popcorn flick that doesn't talk down to its audience will find a good time with “Alien Raiders”. Just ignore the stupid title. Then again, maybe if it's successful we'll get to see “Alien Raiders vs Mega Snake”.