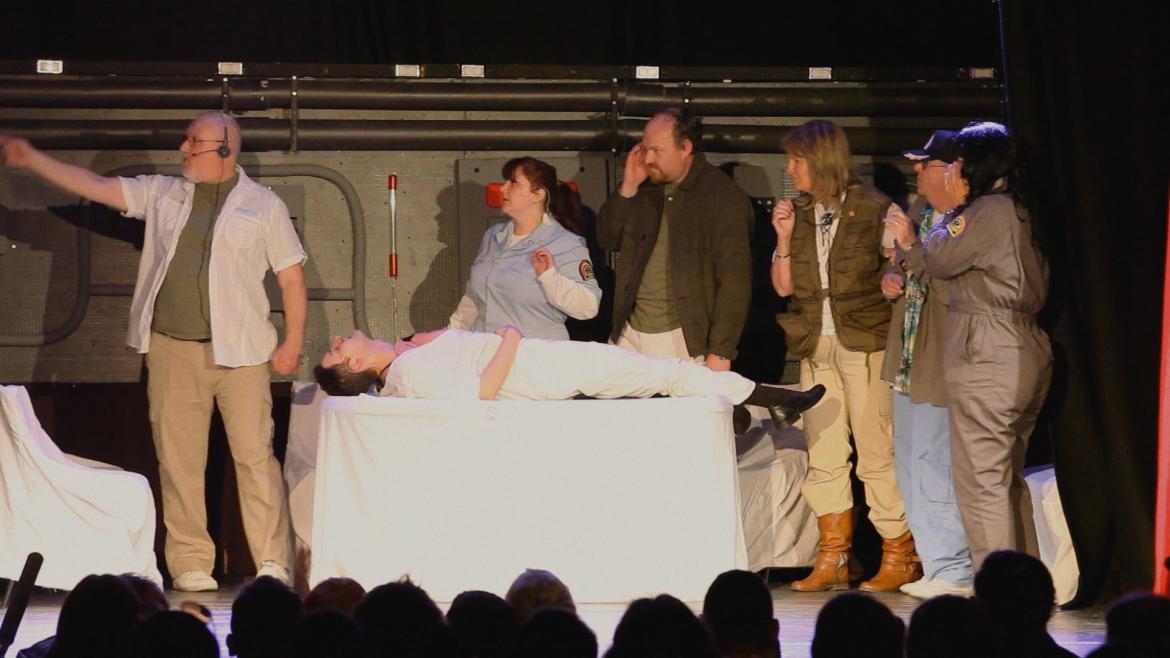 There’s a distress beacon ringing out in Dorset, England. Luckily a group of intrepid bus drivers and their families are around to answer the call--as long as their full shares go to charity.

Brimming with all the optimism of “putting on a show” narratives, Alien On Stage presents the story of how an amateur group of thespians and craftspeople took a production of Ridley Scotts' Alien from their local theatre hall to the West End following an underwhelming opening at home. The documentary focuses primarily on the efforts of show director, Dave, who’s reaching for motivation tactics while keeping his cool in the face of mounting frustrations. Lydia, Dave’s wife, plays Ripley in the production while her son Luc adapted the script. Friends, colleagues and family members fill out the rest of the cast or they lend their technical skills. The result is a lovingly produced if not ramshackle adaptation that captured the hearts of a sold out crowd and resulted in annual repeat performances from the company.

Directed by Lucy Harvey and Danielle Kummer, Alien On Stage trains its focus exclusively on the process of putting together the production. Each subject is given a few moments of solo screen time to help orient the audience, but the filmmakers know that the magic comes from the collective bouncing off one another. Early sequences draw cheeky visual and aural correlations between the Nostromo of Alien with the mechanisms of the buses the crew operates and the set building activities of the company. Rounds of tea or pints are had while lines are reviewed in between smoke breaks. It’s certainly no revelation that a group of people willing to act on stage in their free time are fun to watch, but there’s also very real admiration and respect on display between the subjects. The result is an endlessly charming documentary about the power of play labour and companionship.

The final act of the documentary captures the team’s first performance in London. Jangled nerves are on display and there are more than a few breaks on stage--including a glorious “oh, crap.” It’s in this sequence where Alien On Stage captures something powerful about an in person performance. The players have experience with a Pantomime tradition which appears to help them ride the waves of audience responses ranging from guffaws, cheers of delight, and faux terror. (The famous chestburster scene is a particular standout which I won’t dare go into detail here). The filmmakers capture a palpable energy to the show that vacillates between earnest concentration from the crew, giddy relief from the cast, and rambunctious enthusiasm from the crowd. There’s a mutual appreciation here--audience and performer participating in a feedback loop that’s not concerned with the seams of artifice.

Alien On Stage may not be a probing look into the lives of these company players but it does offer something genuine and heartfelt to its viewers. The infectious charm and optimism of the cast and the filmmakers imbues the film with a watchability that can’t be quibbled with. Viewing the film today, when in-person productions have been near impossible for a year, grants the film a significant weight that taps into a very real and essential part of human connection. In this context, Alien On Stage becomes more than another scrappy underdog story. It’s a document on the importance of collective appreciation of art.