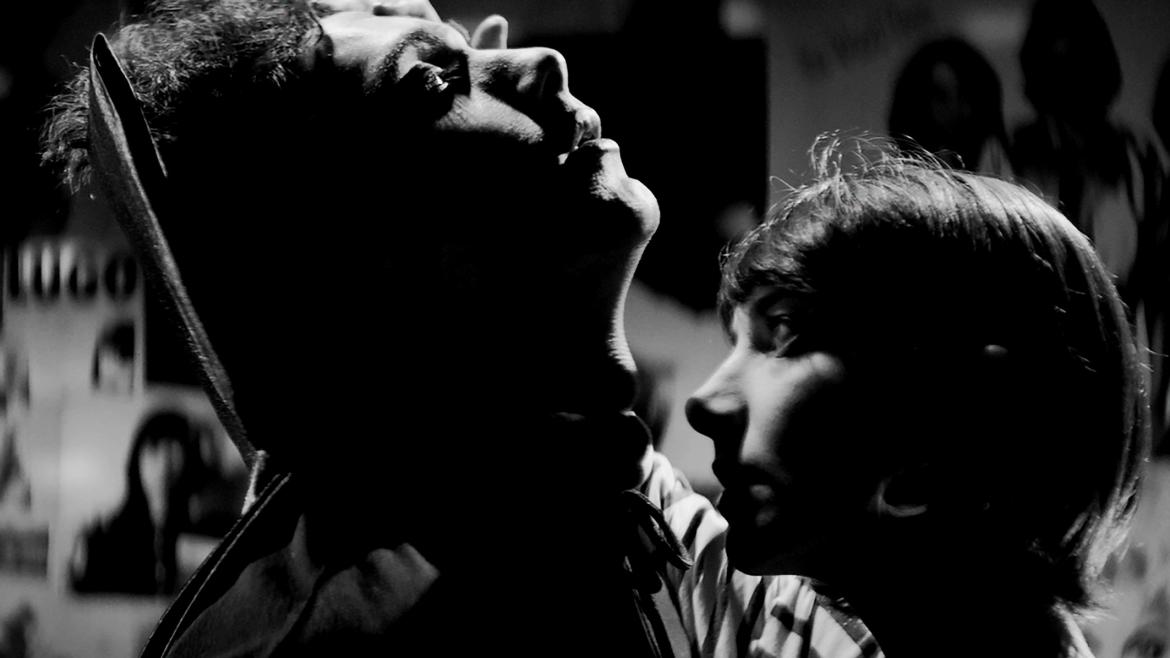 A Girl Walks Home Alone at Night is a “Cool” movie. Directed and written by Ana Lily Amirpour, the film’s tagline states: “The first Iranian Vampire Western.” The pretense of being the first of its kind before you’re even in the seats proves at once irritatingly brazen and enticing. It’s the kind of attitude that makes the “I-liked-this-before-anyone” feel maddeningly solipsistic but also somewhat vindicating when, you know, you can be the one to say it. Filmed in California and set in the fictitious Iranian town of “Bad City” Amirpour’s film is a sad-chic world of beautiful bohemians, pushers, vampires, penniless street urchins, and party-people making for a unique cinematic experience. But despite the buckets of style poured forth the film’s references, allusions, and pretense at “cool” nevertheless keep it on its laurels.

Arash (Arash Marandi) is a twenty-something guy with beautifully coiffed hair that gloriously floats in the wind as he drives his T-Bird. Arash makes a living trimming hedges and doing handiwork for a wealthy family. After the unexpected murder of a local drug dealing pimp, Arash takes over the business, distributing ecstasy and heroin to the party/indie kids all the while attempting to ween his father Hossein (Marshall Manesh) off the stuff. But after a night partying and taking X in the hopes of winning over the daughter of the family he works for, Arash meets a nameless Girl (Sheila Vand) whose nocturnal appetites lean more toward the sanguine than the sexual and intoxicating.

Beautifully filmed in black and white monochrome A Girl Walks Home Alone at Night is peppered with Lynchian landscapes and greasers, hookers and indie kids all portrayed with a dash of ennui and Jamursch-ian quite cool. The self-proclaimed “Western” genre marker is indicative of the film’s isolated, morally bankrupt town, Bad City. How bad you ask? So bad the townspeople use a drainage culvert as an open graveyard. The Girl at first appears as some sort of avenging angel, feeding off of pimps and Johns while warning little boys they better be good. Because if not…well, she is watching. A nameless gunslinger sent from nowhere to violently exact retribution. The Girl is a new “Ms. .45” for those women subjugated by the men of the town.

However, the romance between the Girl and Arash takes much of the wind out of the film’s sails, bogging it down in a narrative that is part “Let the Right One In” and the first half of “500 Days of Summer” if it were set in an Iranian oil town beset with a vampire. While Marandi and Vand have an unspoken chemistry (the pair has probably a handful of actual dialogue together) the film’s earlier moral posturing on addiction and misogyny is altogether sidestepped and forgotten in favor of turntables, Madonna posters, safety pin piercings and skateboards. The film’s position sluggishly alternates between the heavy didactic and doe-eyed genre playfulness.

A Girl Walks Home Alone at Night never coalesces into the portentous genre exercise it claims to be. Rather, the film appears more a hodge-podge of remembrances, inspirations, and indie-artistic cool, all of which works well enough on its own surface.

Movies Like A Girl Walks Home Alone at Night