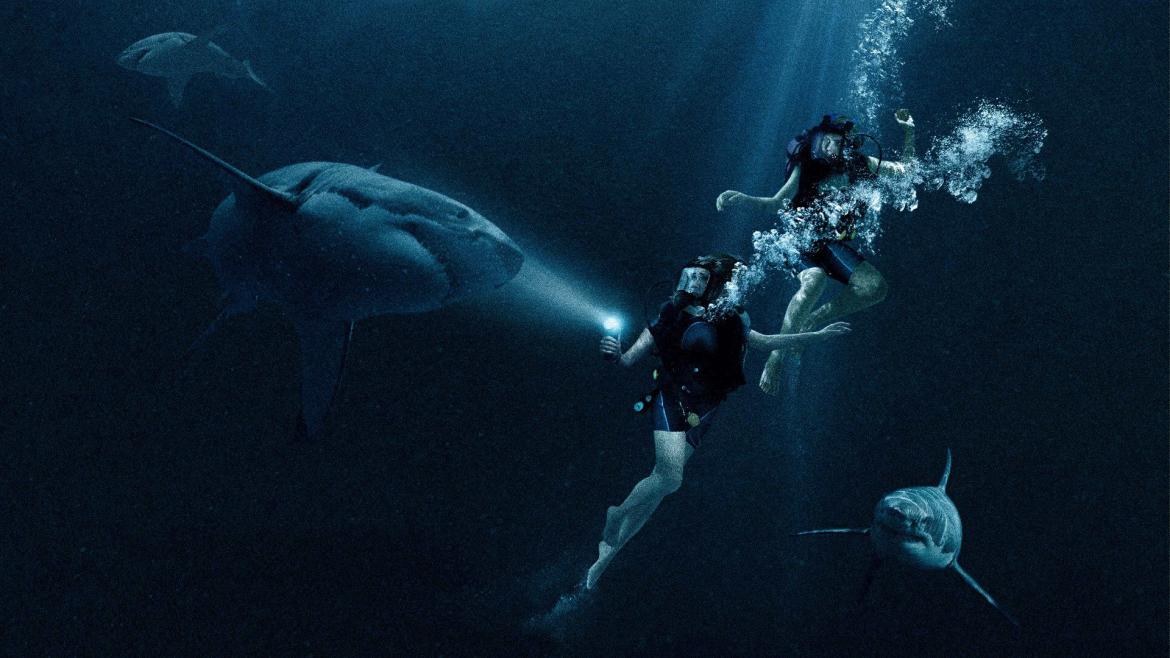 It was late-ish Summer 2016 when this little movie--at the time titled In The Deep--was just about to be release direct to DVD by Dimension when it was suddenly sold off, pushed back for a Summer 2017 theatrical release and reverted back to it's original title, 47 Meters Down. You'd be correct in assuming the success of The Shallows had a hand in the dramatic turn of events. You'd also be correct in assuming that the overall quality of 47 Meters Down was why it was originally slated for direct-to-DVD release, but who doesn't love an underdog story?

Mandy Moore headlines as Lisa on vacation in Mexico with her sister, Kate (Claire Holt), to escape life drama. Under persuasion of some locals they decide to do some cage diving with the hopes of getting up close and personal with some sharks. As luck would have it, they get exactly that and more when their cage breaks off from the safety cable and plunges 47 meters down to the ocean floor. Running low on air and sharks circling above they must struggle to find a way to safety.

In concept, 47 Meters Down has plenty of potential. Potential that only manifests itself in small doses through its runtime. The film is at its best when it plays with the terrifying darkness of deep open water and its misleading silence. Comforting flashlight beams cutting through the void help set some of the most effective moments and play into just how helpless the duo is when faced with leaving the fleeting safety of the rickety cage. Too much time is spent with the actresses shrieking back and forth at each other while the script treats the audience like idiots by telegraphing incidents that have not occurred but might as well expect once they are said out loud.

Argue if you will that without some of the on-the-nose dialogue that audience members wouldn't be questioning character actions in these moments and without that knowledge what other obstacles could possibly make this interesting. Extending an arm of sympathy to that point, the ideas themselves are intriguing, but because they are so explicitly laid out, they become more of an expectation than a surprise. The setting itself handcuffs the filmmakers into finding ways to convey information and keep things entertaining. Still, visually the film is so dark that it can never and likely will never feel like anything more than the DTV companion to The Shallows.

As flawed as 47 Meters Down is, there are a number very effective scenes of tension that--as arguments--just barely hold water when justifying the forced theatrical release. Decidedly low budget and lacking in anything resembling a satisfying payoff 47 Meters Down plays the role of chum to larger and much better shark flicks.