Interview with Paul Allender of Cradle of Filth

It takes a uniquely creative mind to be the burgeoning force behind the free-wheeling, exploratory and atmospheric riffs that power the band Cradle of Filth. Paul Allender is that mind and is that man. Recently, I got a chance to fire some questions at Paul concerning his band, his music and his art.

--With all the evolution of Cradle of Filth, you've been called extreme metal, black metal, speed metal, all kinds of things. What do you think most accurately describes you as a band?
Yes, I’ve heard of all these tags. Personally, I think the best way to describe us is as an extreme metal band.
--In the past and present, Cradle of Filth has used choruses, orchestras, all kinds of ornate stage acts...is anything over the limit for CoF, or is the slate always blank for a new album/tour and nothing is too far fetched?
No, I don’t think anything will be over the limit for us, I mean we are always trying to think and come up with new ideas for albums, live shows, etc. Personally I think the ultimate stage show is yet to come.
--With the constantly evolving sound, where does Cradle of Filth find themselves musically in this new effort?
Well this one is more orchestral than “God Speed” and a tad faster. There’s a good groove going through “Darkly” which captures all the right atmosphere and feeling.
--"Darkly Darkly Venus Aversa" seems to feature a mix of breakneck speed and more riff-based songs. Was this an intentional blending of styles, or did it happen organically?
To be honest, it happened organically. We did have the intention to write faster this time around but the process was organic.
--Where do you feel this album exists relative to your previous albums? Is there anything in it that is new territory for the band? What do you feel sets it apart, if anything, from previous Cradle of Filth albums?
I think this could quite easily fit as the next album after “Dusk” perhaps. I’ve started writing new material, well ideas at least, and this time it’s just as fast but I’m writing slightly more complex guitar riffs, but still making sure the groove is still present within songs. 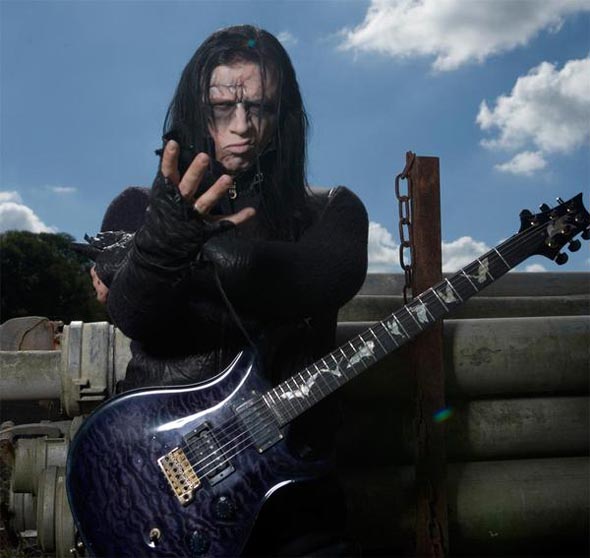 --As a man who professes that you don't stick to a particular form or scale, how does the songwriting process work for you and for the band as a whole?
When writing I usually play and jam with drums until I get a good riff to start with. From then on I write the rest of the song. I have no idea what it’s going to sound like until I have finished the arrangement. If any of the other guys have any ideas they send them to me so I can listen to them and put them in the arrangement if needed. The song bounces back and forth and when I’ve finished arranging it then the lyrics will start.
--Do you think that your unorthodox playing style helps to create the disjointed feeling of darkness that the band prides itself on?
Yes I think it does actually. I play with feel and groove and it just seems to work for writing songs.
--Tell me about "Vomitorium." Where does that come from, where do you take inspiration for your art?
A Vomitorium is basically an area at the coliseum where Romans would go to be sick so they could consume more food at a gladiator fight. I thought it would be a good name for my art considering I’ve had some mixed comments about how sick it is sometimes. I take inspiration from anywhere - at a recent video shoot we did there was a plaque on the wall and when I first noticed it I saw something completely different which gave me an idea for another image. I’m taking pictures all the time for texture and ideas. I’m just about to launch my new website where I will be selling prints etc again. --Do your art and music overlap? Do you let one influence the other?
At the end of the day I think it will always overlap because it’s all coming from the same person. When doing art though, I must admit it comes from a slightly darker place than what the music does.
--Who are some of your favorite artists/musicians?
I don’t really have any favorite artists as such, I mean guys like Mat Lombard, etc. are cool as hell and I love what they do.
--For fans who may not know, what can they expect from a Cradle of Filth live show?
Every show we do no matter how big or small we always try to put on a show. The shows are pretty intense with the visuals and the speed of the band.
--Okay, so last year we did this with Dani, so now I'm giving you a shot! Are you a horror movie fan, and what are your favorites both recently and all time?
I’m kinda into horror films but not a massive fan. I like the first “Hellraiser” film and films like “Nightbreed’ but I wouldn't really class that as a horror film.
--It feels like Dani keeps his tongue in his cheek a little bit concerning the theatrics and the mythos of Cradle of Filth. Where does it sit for you? Where does the stage character Paul Allender separate from Paul Allender the man with bills to pay? Or does it separate?
I completely keep my working band life and private life separate. They never cross; I only tell people what I’m doing if it has anything to do with the band. No one knows what I’m doing with my private life at all.

Keep your eyes out for Cradle of Filth on tour, as well as your ears open for "Darkly, Darkly Venus Aversa." And if you're into art, keep tabs on "Vomitorium." There's some pretty crazy stuff in there, and I'm willing to bet the next generation will be equally wild. For myself and BGH, thanks to Paul for his time and everyone who helped make this happen. 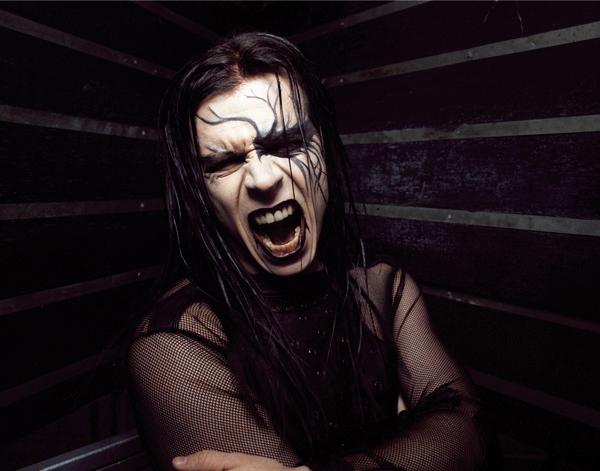