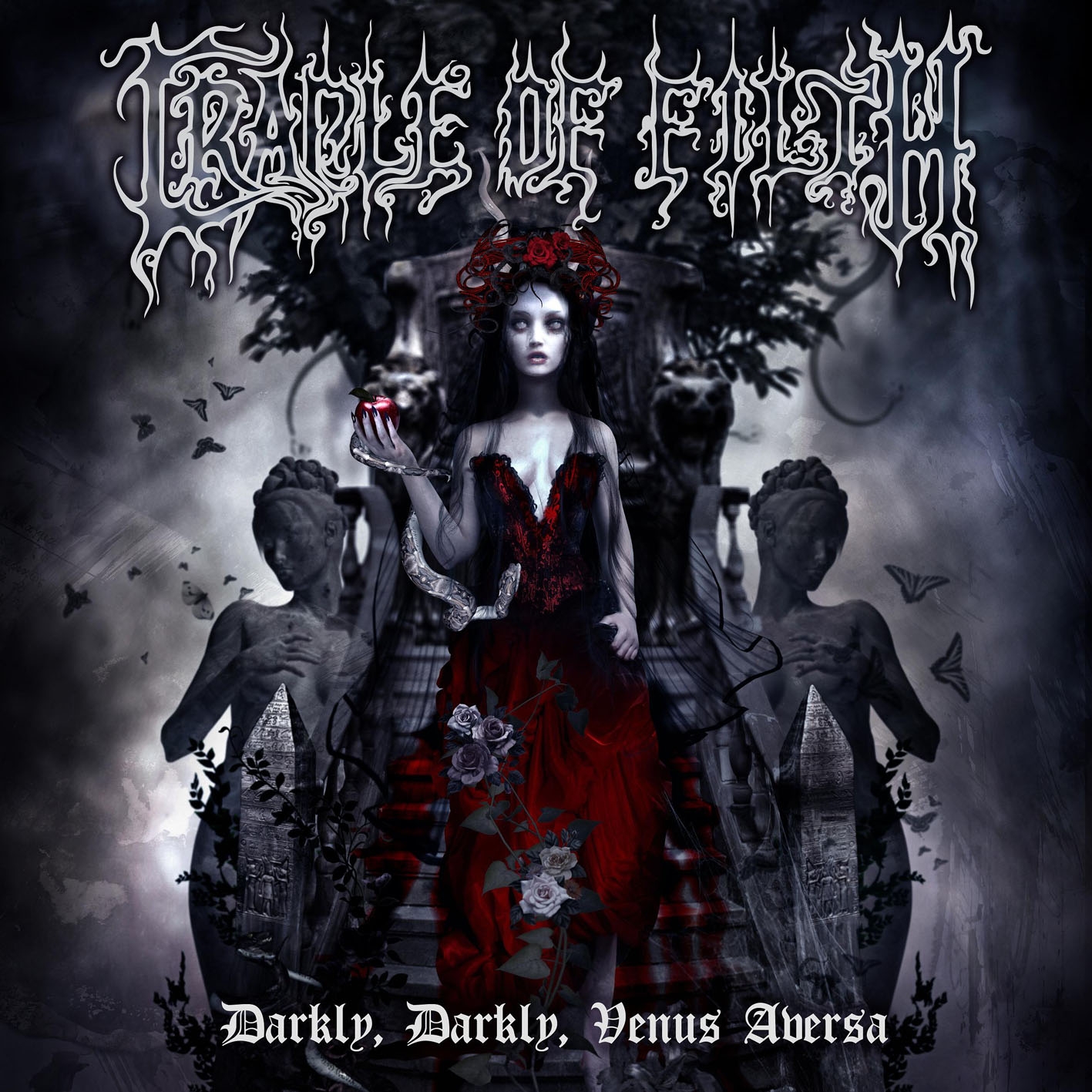 “Darkly, Darkly Venus Aversa,” while ever so slightly different from the other Cradle of Filth albums, is just as eclectic and ranging as ever. Now, let me be clear; the album is all metal through and through, and puts definition to the term “extreme metal.” It’s the mixing of sounds and ominous themes with blast beats and high-handed guitar that gives the album a sense of being just plain different. It’s appropriate that an album telling the story of the fabled character Lilith should range from placid grace to frenetic vehemence.

More so than any other band in the genre, Cradle of Filth has never been afraid to blend seemingly disjointed elements into, well, maybe something short of a homogenous whole, but at least a cohesive one. The combination of orchestra, chorus, keyboard, buzzsaw guitar, loud percussion and Dani’s assertive vocals has again been sent through the grinder, and the pieces that remain compose the bulk of the album.

The piano/keyboard is the practically the linchpin of “Darkly, Darkly Venus Aversa.” While in sharp contrast to the bulk of the album’s fare, its clean sound and clear tones lend the album just the right shade of comfortable recognition that prevents the songs from becoming too dense.

Not altogether different from their brethren in extreme metal, Cradle of Filth is at their best during the clarion moments when the brakes are applied ever so slightly. In those parts, the riffs become bold, the percussion is allowed to settle into a groove and all the pieces come together to stress a single section or phrase.

The album begins with the decadent and grandiose “The Cult of Venus Aversa,” and while that song is layered and filled to the brim with dark, hedonistic and gothic overtones, it is almost too scattershot to be appreciated. The album doesn’t truly pick up steam and get rolling until “The Nun With the Astral Habit” (which doubles as a fantastic idea for a Halloween costume.) It’s here where Paul Allender’s guitar settles into a heavy, powerful breakdown that provides a nice platform for the orchestration of the vocal fury and massive, grandiose themes.

That momentum continues straight through the hammering “Retreat of the Sacred Heart” and “The Persecution Song,” which carries with it a feeling reminiscent of some deeply twisted retelling of an old Grim Brothers fairy tale. It is arguably the most theatric track on the album, and that’s saying something.

Worth noting is the opening riff for “Deceiving Eyes,” which breaks the usual mold of Cradle of Filth and presents the listener with something deliciously similar to the hook laden riffs of late-era Anthrax. If I could criticize it in one place, it’s that the riff is featured in the opening, and never comes back.

“Lilith Immaculate” combines a strong female vocal presence with a sarcastically saccharine sense of peace and ease, which is just another example of the band’s ability to create moods and conjure complicated images with multiple levels.

From there, “Darkly” wanders a little in spots, as “War” is slightly generic by Cradle of Filth standards, and “Forgive Me Father I Have Sinned” is wonderfully multifarious, doesn’t really bring anything new to the table. In the middle, “Harlot on a Pedestal” is another teeth-grinding, neck-bending affair that is to the album’s benefit. By the time you reach “Beyond Eleventh Hour,” you’re still enjoying yourself, but you begin to get the idea.

As with most extreme metal and all Cradle of Filth, “Darkly, Darkly Venus Aversa” is an album for a discerning ear with the patience to take apart and appreciate its layers. The album is in no way a beginner’s stepping stone into metal. It is a well-crafted, rewarding album that explores the corners of metal’s potential, and isn’t afraid to take a calculated risk. Not everything works, but the majority comes together and lends the album a unique character. If you possess the proper chops and have an appreciation for a dark, opulent flair, “Darkly, Darkly Venus Aversa” can be a rich experience.