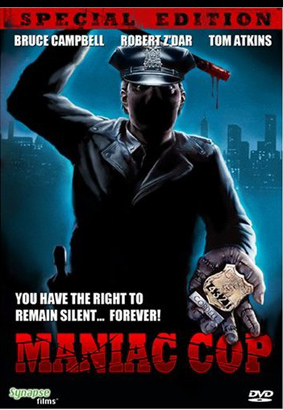 This is the latest in an ongoing effort I'm making to go back and catch horror films that have eluded me throughout the years. They're not all "classics", but the hope is to expand my horizons as a horror fan a bit.

For whatever reason, the "Maniac Cop" series has always been a mystery to me. It's sort of on the fringes of the late 80's, early 90's slashers, and as such I figured there wasn't a whole lot it had to offer. Produced/Directed by exploitation director William Lustig, the series follows a good cop gone bad after being wrongly thrown in prison and assaulted by the men he had once fought to put away.

I've been writing capsule reviews on Facebook, so I'm going to quote them here. If you want to follow along with my film misadventures you can add me as a friend on there, but you'll have to actually know my last name, which gets dropped occasionally on the podcast. A few of you have already found me on there, so I have confidence you can do it if you really want to.

Late 80's slasher about a killer Cop, starring Bruce Campbell. If you're scratching your head right now, this probably isn't for you. It's pretty fun times though, including the awesomely over the top stunt-filled finale. I'm told if I liked this one, the sequel will blow my mind. Can't wait!

Well, the first sequel, "Maniac Cop 2", didn't exactly blow my mind, but it was a fun little piece of slasher oddity:

What a glorious mess this film is. Right around the point where the hulking, disfigured "Maniac Cop" befriends the Charles Manson look-alike and the two team up together, you can literally hear the last gasps of the 80's slasher genre. Still, I couldn't help but enjoy the wild, train-wreck nature of it all. What can I say, I'm a sucker for a good, cheesy slasher film.

So there it is folks. "Maniac Cop 2" was released on DVD at one point, but now is very rare and expensive to track down. Luckily for you, it's it's streaming from Netflix as we speak. So check out the trailers below, and be sure to leave your own experiences with these films in the comments.