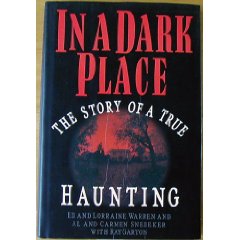 Haunting in Connecticut Based on True Story

For whatever reason, there is always a ton of interest in horror films when they are purported to be "Based on True Events". Back when "The Strangers" came out, we were pretty astounded by the traffic sent our way from people searching for the story that the film was supposed to have been based on. Of course, all they found when they got here was this... Helpful? No. Hilarious? Sure.

At the end of this month Lions Gate will be releasing "The Haunting in Connecticut", and so far all the promotional materials have pushed the "true story" angle pretty hard. In this case though, we at least have some source material to cite.

The source in question is the 1992 book "In A Dark Place". The synopsis to the book reads pretty much word for word when compared to the story of the movie.

An intriguing account of the Snedekers' encounter with the world of the supernatural describes the family's move into a converted Connecticut funeral home and their battle with sinister, inexplicable phenomena.

The book appears to have been out of print for a while, and presumably emboldened by the upcoming film release, those who do own copies are selling them on Amazon for over 100$. Out of all the reviews for it on Amazon though, most seem to be positive. Here are a few examples:

It's still the scariest thing I've read on ANY subject and had me spooked of funeral homes,old drains,and rusty sinks for a long time. Not to mention the poor boy who's bedroom turned out to be the south coffin room.Different,chilling, and true, and the grotesque events leading to the hauntings made my skin crawl.

This one gets a bit more interesting...

Whether Ray Garton has embellished on the happenings I don't know. I know a film was made, changing the name of the Snedekers but it was apparent it was the same family. The film is totally wishy washy compared to the book though. A lot is left out and in my opinion you don't get the same feeling that you get from the book.

That's an interesting quote, mainly because as far as I can tell there hasn't been a film adaptation of this book yet. So, presumably she's actually talking about "The Haunting in Connecticut"? This close to the release, I guess it's reasonable that she's seen a test screening, but she's so vague in that quote that it's honestly hard to tell what she's talking about. Either way, both of these people seemed to love the book.

This guy, however, wasn't buying it. He seems to cast doubt on the believability of the story:

Depression far outweighs the chills here. Imagine a huge cauldron boiling over with sickness, evil, and disgust and you have this book. It's possible that the Snedekers were sabotaged by demons. Such things do exist in this world. But they seem so dysfunctional, and their responses were so inappropriate, so bizarre that the whole scenario strains credulity.

Well, at least this time we have a little something more to go on than we did with "The Strangers". Has anyone out there ever read this book? I'm almost compelled to pick this up now, but no way am I paying $100 for it. I could go to the library, but that's where all the homeless guys hang out in West Palm, so that won't be happening any time soon either.