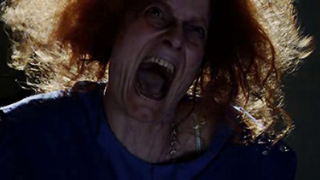 Let's start the news this morning with a well-deserved laugh: the new Fangoria blog. LOL. Oh, how the mighty have fallen! Some people say that this ultra-basic blog is the death-rattle, some people say it's a possible rebirth. I kinda hope it's like a guy who's been in a serious car-wreck and has severe brain-damage, leaving him a drooling imbecile who has no real motor functions but is still, sadly, barely alive for years and years, becoming a drain on their friends and family who secretly wish that he would just die so they can move on with their lives, causing brutal inner turmoil inside them because they know that it's wrong to think of their loved one like that. Kinda like that.

Over at Dread Central, they score a nice coup with a short interview with Rider Strong, star of Cabin Fever and, more importantly, Boy Meets World. And while he does a serviceable job discussing the Cabin Fever legacy, not once do they ask him about motorboating Topanga's big fat juggs. Seriously...face aside, I could plant a flag on that pasty chest and proclaim it as the property of Spain. My God...did you see her in National Lampoon's Dorm Daze? That movie gave me arthritis, if you know what I mean.

Five-headed mangina Joss Whedon and hipster documentarian Morgan Spurlock are teaming up to make what is going to be the most ironic, annoying and patronizing documentary ever about the San Diego Comic-Con. Let's place bets right now that the man-mammed Whedon stuffs the thing with scantly-clad “Slave Leias” and then uses some sort of pseudo-feminist BS to make viewers think that what they're watching isn't Maxim-level jerk-off material. Meanwhile, Spurlock will comb his handlebar mustache with a PBR can.

So, of course, the big news today is former Fangoria staffer James Zahn's loud 'n 'proud Facebook missive against his former employers. The major consensus is that he's just confirming what everyone figured about the behind-the-scenes of the magazine, but the real surprise, for me, at least? That Fangoria might have folded! The last issue I bought was about three months ago, after a two year hiatus; I was shocked by the $27 cover price and the 84-page tribute to Twilight. But, I gotta say, I loved the article entitled “Kane Hodder's 12-Minute Killer Ab Workout”. I lost five pounds! Thanks, Fango!

In Horrorhound Weekend news, it's been announced that at this March's Indy convention that the full, uncut version of Clive Barker's entertainingly silly "Nightbreed" will be screened for the first time ever. It sucks that I'll be missing it because I'm gonna be chugging Jim Beam while partying with about eight-to-ten BBWs in the BGH room's hot-tub. If you're reading this and you're a plus-size fox, well, you're fucking invited.

Susan “Bag 'Em and Tag 'Em” Sarandon's daughter, Eva “Godzilla Tits” Amurri has been gaining a bit of notoriety lately, especially after a saline-filled performance on Californication (whatever that is) and palling around with Olivia “Do You Like Me Yet?” Munn. She must be learning quite a bit from Munn, because she's going after your nerd-dollars now with a lead in "Isolation", a horror flick set in a... wait for it... hospital... and she has no memory how she got there! Oooh! I'm guessing she got there because of a botched boob-job. Speaking of botched boob-jobs, let's bet money now this goes straight to DVD. ZING. 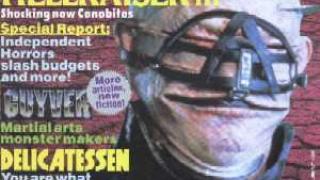 GOREZONE Rises From the Dead