"Twilight" producer, AKA chief glitter consultant, Mark Morgan has just lined up a big screen adaptation of the graphic novel "Head Smash". as his next project. The book with pictures tells the tale of a man who discoveries a serum that gives him super powers and uses it to take revenge on a crime circle that betrayed him. The glitter thing was the only "Twilight" joke I know.

Dave Kajganich, of "Blood Creek" fame, has been tapped by the folks over at Universal to write the script for the upcoming remake of "The Creature From the Black Lagoon". This can't turn out any worse than the "Wolfman" remake so let's keep our chins up on this one. Or not. Honestly I just ate some cookies from a Chinese restaurant and my mouth is numb. I'm kind of worried.

Ethan Hawke's award winning personality helped "Sinister" pull in a respectable $18.3 million this past weekend. Not a ground breaking number but when you consider the flick was only made for $3 million than you start to feel some baby quakes. That may also be these cookies though. I can't see out of my left eye.

The first still from "The Evil Dead" reboot has hit the tubes fresh off a hot unveiling at this past weekend NYC Comic-Con. Not going to lie, it's pretty freaking creepy. I also can't lie about the fact that there's some sort of weird film on my teeth now and brushing doesn't seem to do anything. 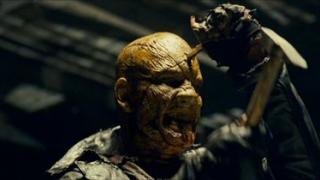 This week we take on "Blood Creek", a Horse-riding Nazi Vampire Viking Mummy movie directed by Joel Schumacher. No, seriously.