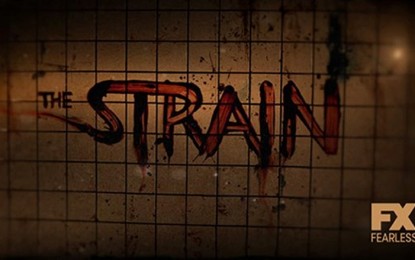 Book Vs Television: The Strain S1:E7 For Services Rendered

As always the opening of episode seven, “For Services Rendered,” is an immediate attention grabber. Seeing Joan’s husband obliviously hang out in an empty country club (I guess his 19 hour flight drained him of his common sense) and pour himself a drink is a little stupid, but hey, maybe part of him can foresee this being his last. A slight slow burn leads up to every man’s nightmare of returning late from a business trip and seeing your wife transformed into a hideous life (and blood) sucking monster. Joan has by far been the most intensely creepy transformation. I don’t know if it’s the Ms. Frizzle-esque hair or the latent intense confidence that spills over from her human self, but Joan is the last original survivor I would want to have to meet in the shadows.
The action continues rather consistently for a while with the Group (Abraham, Eph and Nora) coming up with a pathetically elementary plan of luring Eichorst to the train station using Jim as bait. Though this is the most ridiculous plan, everyone agrees to participate in order to find the Master's lair and it apparently is necessary to consistently reiterate to the audience (whom I suppose they think has no knowledge whatsoever of vampire lore) that silver kills vampires and if you kill the Master you kill all the offspring. It's painfully obvious the plan is bound to fail, but you get to see Eichorst’s "Matrix" style reflexes as he and Abraham scuffle on the subway platform.
The best part for me is again the flashbacks. I’ve been waiting for these patiently each episode. Though there is not much in the way of action or gore, the intensity and sheer psychopathic contact of Eichorst towards Abraham is darkly fascinating. Not to mention is beyond jacked up that it is revealed in this episode that Abraham himself is the one who meticulously carved the Master’s coffin. It’s more than a bit of salt in the wound when the rest of his story is developed.
At least this episode ended on an interesting cliffhanger. After the clever tid bit of Joan’s reflection vibrating in the mirror as she chases her poor family though the house to a not so decent hiding place, seeing the Luss’ Nanny and daughter along with the Luss children huddled in the (all glass – do these people not appreciate privacy?) pantry while Joan and a rando vampire are attacking the door is a bit terrifying. I had a slight waking nightmare of how petrifying it would be seeing my mother as a sick combination of Jerry Dandridge from "Fright Night," Annie Wilkes of "Misery" and Jack Torrace a la "The Shinning" (quite the combo, right?) chasing me through my childhood home and it’d make me want to curl up and die before she could get to me. Regardless, when they are sure all hope is lost – some badass Assassin Creed looking creeps show up and pop both Joan and the Rando in the head with silver. Shocker to the audience – IT’S A VAMPIRE. Yes, an assassin vampire…I’ve seen a few remarks on how cheesy he looked compared to Eichorst, but in all honesty, I think that worked in his favor. It gave him a bit of puppetry that could be interpreted as approachability? Or at least not complete terror (granted he is still a creepy, dead skinned, deranged rabbit toothed vampire)…regardless, knowing that his character only continues to be a badass definitely adds to his appearance at the end of the episode.
Overall I was really into episode six, and it was also the first episode where the mister wasn’t consistently bemoaning the pace and inaction of the episode, so I’m confident to say it’s getting both feet on the ground. Both types of fans (those with little expectation and those with high hopes) in my house were pleased so solid A this week, Strain.

On a side note, thinking of live tweeting the Episode 8 - follow me on twitter @cc_riots and use #thestrain @bghorror in your tweets - give me some reactions and entertainment between commercials next Sunday at 10pm!