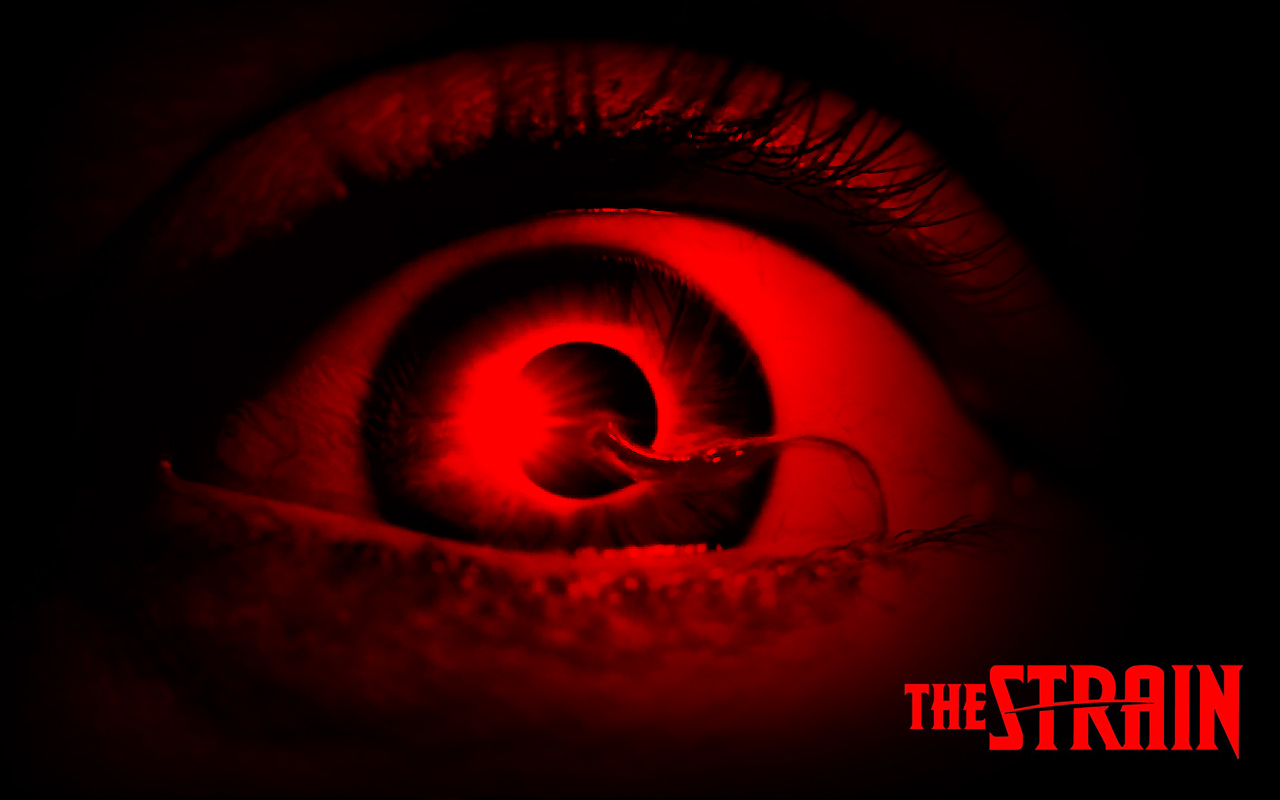 Book Vs Television: The Strain S1:E12&13, Last Rites and The Master

Since BGH was getting an amazing make over last week, I skipped out on the recap of Episode 12, “Last Rites.” It’s not like you missed much, so I’ll sum it up before the recap of the finale.

We get another flashback of Abraham’s where he is out hunting the vamps in Albania – he soon realizes at the expense of his beloved wife that he cannot be both a hunter and a husband. She ends up bitten and he cuts out her heart and stores it in an apothecary jar in his man-cave. Nora has to slice off her own mothers head after she is bitten by Bolivar when the vampires attack the pawn shop. It wasn’t as intense of a scene as I would have expected – and that is not the route that the books takes, but we already know its veered a little.  Also, Dutch un-breaks the internet for like 10 seconds for Eph to make a half assed warning – and Palmer gets a visit from The Master and a few drops of his blood.

All of that took a whole hour. Yup.

So on to the season finale – “The Master.” Palmer decides to visit Knickerbocker after the group has run off and snoop around. After he picks up a silver knife he laughs thinking that he’s immune, but Eichorst appears outta the shadows and rains all over his immortality parade.  Basically Eichorst tells Palmer he hasn’t done enough yet, and The Master will do what he will when he feels it is property. Palmer pouts and takes Abraham’s wife heart for his own collection. Back at Stoneheart, Palmer’s bodyguard dude gets mad at Palmer being a turncoat to humanity and tells him he’s out – Palmer doesn’t really care and heads out to throw the head of the health department off her office balcony with Eichorst in tow.

The gang is hanging out at Fet’s apartment and eventually realize that the nest they ran into the other night is underneath the gothy theatre that the poser Bolivar decided to buy out for himself. I appreciate that it’s alluded that Bolivar must be The Master’s pet since they are all getting to crash at his place. And he gets to keep his wig on… After a terrible man to man chat with Zach, Eph and the gang head off to ruin the black mass. They show up at the theatre and have a wall of death clash with the vampires that Lamb of God would be embarrassed of and it ends up with Eph, Abraham and Zach upstairs facing The Master while the others fend off the minions. Abraham does a lot of staring and stuttering at the Master while Zach and Eph pathetically smash guitars into windows trying to let the light in. Eventually enough sunlight does get into the den of sin and affects The Master. As he is being fried by the sunlight all the minion vampires including Bolivar and Eichorst are being affected as well – and in a wonderfully done scene, they are all pulled backwards from the fight. That whole scene was super well done and effective. However, SURPRISE – sunlight doesn’t kill the Master; So he parkours off a few buildings and into the shadows. Abraham stands stunned and admits he was wrong and is way out of his league.

Lastly, while all of this is going down – Gus is hanging out with the Assassin Vamps and is being bribed into being their human soldier. I don’t know who at this point would be motivated by money when the world has gone to shit, but apparently we should never underestimate the intensity of fear and greed. Gus whole-heartedly agrees as he realizes he is standing in the middle of a group of Ancients – who we are to assume are related to The Master and the head Assassin Vamp. They are a bunch of snoozing crypt keeping looking weirdos with bloody fingers reclining in some chairs that look like the set designer from The Cell procured them.

Look, this was the season finale and as a viewer we are supposed to be glued to the television. I’m pretty sure I actively watched about 60% of it. Being a fan of the trilogy I had such high hopes and intense adversion to this being translated into a television show. The parts that the show that do well,  are done AMAZINGLY  - it just doesn’t consistently produce. If I hadn’t read and loved the books so much, I might be more inclined to enjoy the show a little more and not nit pick the areas they decided to change – but in this instance, those areas are crucial to the story telling and pacing. Overall I think the series lacked the intensity of impending doom and hopelessness. The story is crisp and captivating while the show is a bit plodding and hung up on poorly developed characters. I hate to naysay it so much, because I did overall enjoy season 1 and yes, I’ll be watching season 2 but I think I won’t be anticipating it nearly as much as I was the premiere. I also still recommend the books over the show – or atleast in conjunction with the show to anyone who will listen. Here's the link to make it easy for you!

Total 2.5 outta 5 – worth watching, but on that weekend binge.