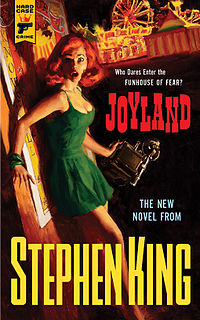 Revisiting his old ways, Stephen King’s newest novel, Joyland has the heart of that disenchanted college youth you once were and the fun you were bound to have in spite of your looming shortcomings.Joyland is a quick read that ticks you slowly up the top of that rickety rollercoaster just to plummet you headfirst into unseen curves and humps. A nostalgic ride through a lost summer, a first love, a mysterious new place and the sweat of a summer job, King haunts you with things you’ve tried to forget and then those things you yearn to remember.

A northern college kid, looking for work to pay his way through school, happens upon an advertisement for summer help at a small southern amusement park. Needing the money and to feel grown up with his own space, Devin takes the job. His introduction to the park lands him a strange palm reading from the resident fortune teller and a little back story on the unsolved murder that occurred inside the only horror ride, Horror House. The Ghost of Linda Gray, the girl who had her throat slashed in the Horror House years ago, is said to make appearances throughout the ride, though most of the green, summer help believe this is just hype for the customers. Devin and his friends do not work that part of the park but one summer night after a few beers and a long day’s work, his friend’s girl convinces them they have to experience it before their summer is over. The following day off, the three visit Joyland to experience the ride for themselves and are ultimately let down- except for the only one of them who didn’t believe. Devin’s friend saw Linda Gray, standing with her hands out and pleading for help – and Devin knows he’s the only one who can save her.

In the vein of Stand by Me and It,Joyland focuses more on the personal relationships of the characters and paths that those relationships leads them toward. As Devin’s summer begins with his heart broken and a dark cloud looming above him, the friendships he forges at Joyland ultimately lead him to solving a decades old murder mystery, and finding as well as proving some peace. Though not full of the blatant bloodshed often seen in King’s other tales, Joyland is a steady simmer of mystery and secrets with an admirable payoff. Thrills and chills, ghosts and the supernatural are what King is great at and he doesn’t disappoint with Joyland. And there are carnies involved – who isn’t already unnerved when you’re at an amusement park?