Where in the World is Louis Tripp?

Earlier this week I came across a sequel I had never seen, 1990's Gate II: Return to the Nightmare. Being a big fan of the original Gate flick, I had high hopes. Especially considering that the second movie starred none other than the ginger haired metal head Terrence 'Terry' Howard who's love of satanic death metal started the problem in the first place!

Now, at the risk of losing my horror nerd membership card, I had no idea that there was a sequel. The original movie though always held a special place in my heart. I identified quite a bit with the lonely nerd and I thought he was pretty hilarious none the less. Beyond anything, this characters antics is part of what made the movie memorable, is generally one of the standout memories that people remember.

"Gate II" lacked a lot of what made the first movie great, but it had some memorable scenes as well. Seeing the grown up Terry graduating to long flowing blue satin wizards robes and the like is pretty hilarious all the same. However, the point here isn't to review "Gate II".

Ever since IMDb was launched, my movie watching has taken on new facets. Nearly every movie I watch involves having the laptop around so I can poke around through the movie's listing and gather information. Things such as 'Where do I know that guy from?" "What's that guy done since this crappy movie?" Such was the case with "Gate II". As I started to dig deeper into Louis Tripp's IMDb profile, it became apparent that he disappeared from the face of the earth after the release of this movie.

Normally there little fan shrines setup on the internet for just about any 80's one shot wonder you can think of. It doesn't matter how obscure, there's usually somebody with an unhealthy obsession who's set up an extensive info dump. Not so in Tripp's case. A simple google search shows nothing but listings for "The Gate" and "Gate II". Further digging in the message boards bring up this nugget:

Patrick (last name withheld) wrote in to say that he worked with Louis Tripp at a call center in St. Catharines, Ontario, Canada. His legal name is now Twelve Twenty (L is the 12th letter of the alphabet, T is the 20th.)

I loved the Gate movies, but honestly would not recognize him at all. He's certainly now an imposing and decidedly non-nerdy looking guy, very quiet and very friendly and polite!

Tripp, or should I say 'Twelve Twenty' was only credited for a bit part in "Detroit Rock City" after "Gate 2" in 1990, then vanished. Which is sad, because as he showed in these two horror flicks, he had the chops to make a name for himself in B-Movie horror.

So, despite it all I'm left with curiosity on why he bailed on showbiz, why he changed his name to 'Twelve Twenty' and if there's ever a chance he would come back if they ever go through with the rumored "The Gate - 20 Years Later".

That said, if you're out there Louis, let us know! An interview would indeed be in order! 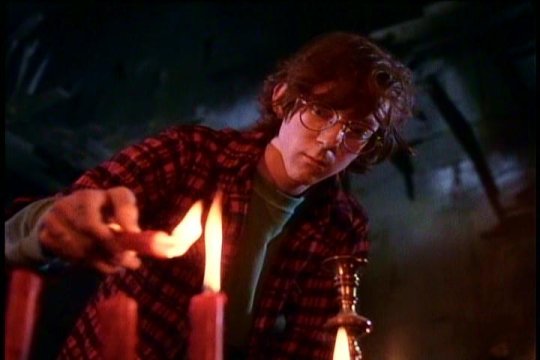