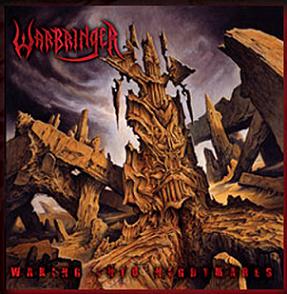 Yes. Yes, yes, yes. Frequent readers of my little corner of the universe will remember that I have been campaigning for the emergence of a new American thrash metal band for months now. Also recall that when I saw Soilwork live back in February, I spoke at some length about the up and coming band Warbringer. I encouraged everyone to look into their forthcoming album “Waking Into Nightmares” and said we’d reconvene upon its release in the spring.

Well, the flowers are blooming, the album is out, and here we are. And wouldn’t you know it, “Waking Into Nightmares” is everything I hoped it would be. Unforgiving, unrelenting, so far over the top that I can’t even define it. The boys from Ventura, California got it right.

“Waking Into Nightmares” is clearly the result of a lifetime of listening to Slayer, Exodus, Megadeth, Testament, Overkill and so many others of the same ilk. It is homage to speed metal’s dominant age, an album that could almost be described as being “too late,” but in a good way. Part of what makes the album so effective is that the members of Warbringer are clearly fans of all the acts that came before. The patterns and similar constructions are undeniable.

The pace is blistering, the metal is heavy and pounding, and the album is seething with old-school mosh pit attitude. While perhaps not as pound for pound artistically talented as Slayer or Megadeth, Warbringer makes up for the difference with pure fury and a desire to be considered one of the elites. “Waking Into Nightmares” isn’t going to rewrite the book of speed metal, far from it. Rather, the album serves to inject a much needed shot of vitality into a somewhat languishing American speed metal genre.

For evidence, you need look no farther than the track “Scorched Earth,” which is an infectious and beat-driven speed metal anthem, but back in the day would have been a head-banger favorite. The entire album is variations on a theme; gallop riffs, well-placed double kicks (as opposed to double-kicks for the sake of double-kicks,) and remarkably over the top lyrics.

The production on the album is not perfect, in one very small drawback on an overall great experience. The end product is very drum-centric, and it marginally dominates the other instruments. I personally had to listen to the album through twice, not really hearing the guitars until the second run. Also, the band occasionally loses focus, and some of the later tracks lose their place, and give into a touch of “…And Justice for All” wandering. The only other knock here is a somewhat predictable one, as it is the same fault that plagued Slayer’s early works. The songs, if listening casually, can be difficult to tell apart. Still, this is a pretty common issue in this type of metal, so no real points off there.

That’s really it for the bad parts, though. If nothing else, listen for the drum work of Nic Ritter, who puts on a clinic of metal drumming. He can bust out at the proper moments, but also, in songs like “Prey For Death,” can transition between pounding beats and necessary restraint. It would have been easy for the album to become drowned in percussion, but Ritter keeps it from happening. Also, while “Nightmare Anatomy” is largely an atmospheric instrumental throwaway, Ritter’s line, and the fills he uses, are quite good.

Really, throw a dart at the board of this album and pick a track. “Living in a Whirlwind” (which is phenomenal live,) “Jackal,” “Severed Reality,” or any of other songs already listed are all examples of the way American speed metal used to be. It’s rude, unpolished, untamed, and vicious. Warbringer’s own lyric sums up their album best, when in “Scorched Earth,” John Kevill yells out “relentless shotgun violence!” I don’t think I could have put it better myself.

I can’t stop listening to “Waking Into Nightmares,” and if you’re a fan who pines for the days when Slayer or Overkill ruled the metal world, find this album and open yourself up to it. Between Toxic Holocaust and Warbringer, there may be hope yet. If you’re looking for a lot of technical or intellectual depth, you’ve come to the wrong place. If you’re looking for a thrashing good time, welcome aboard. “Waking Into Nightmares” isn’t perfect, but damned if it’s not a lot of fun.