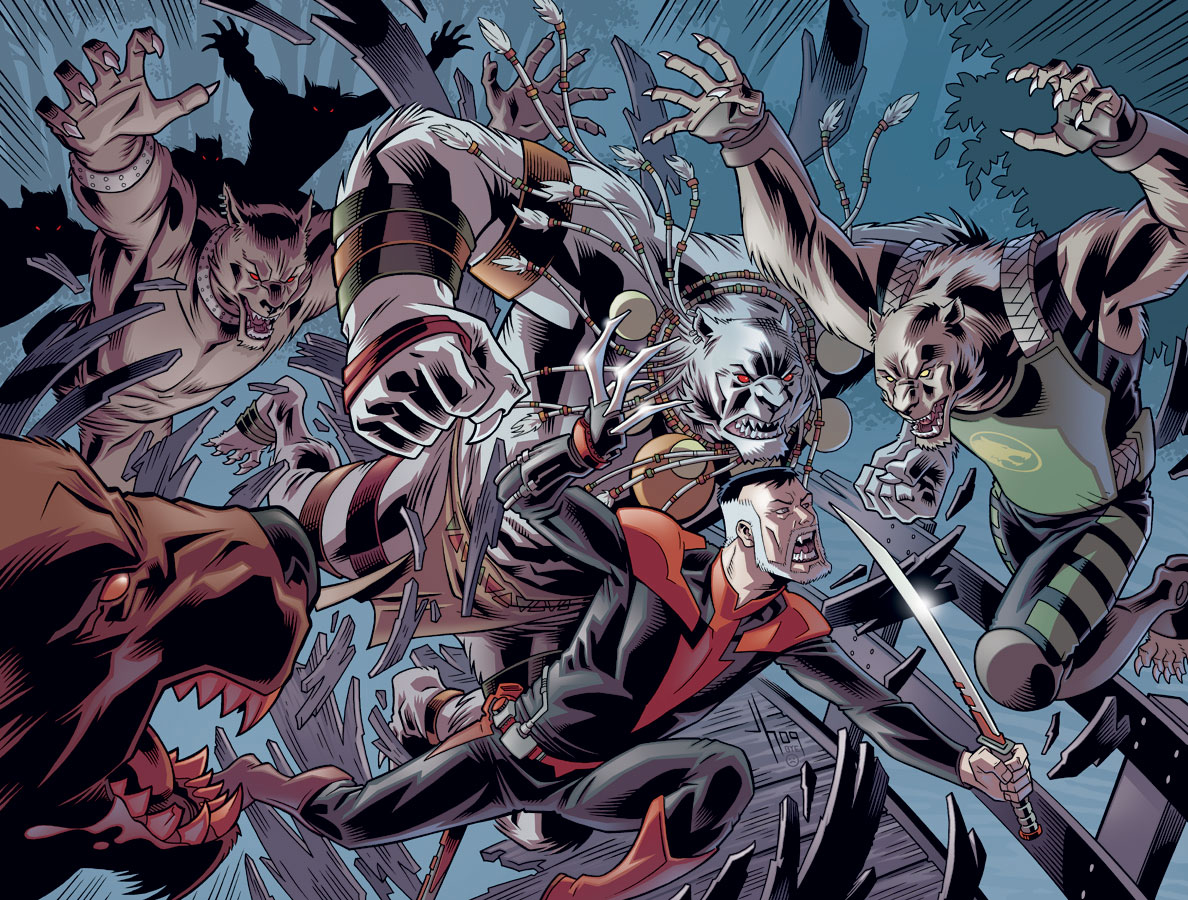 The Universal Monsters have a long history on TV and movies. Comic books, however, are an often overlooked medium the creatues populated. In the next few weeks we will be looking at the comic book appearances of the famous film monsters of yesteryear including The Mummy, The Creature From The Black Lagoon, Invisible Man, Bride Of Frankenstein, Frankenstein, and Dracula. First up is Lawrence Talbot, AKA The Wolf Man.

No we are not going to cover every appearance of a Werewolf in comic books as that would be the longest list in the history of BGH. These are specific appearance of the Universal Monster himself, or the direct uses of “The Wolf Man” moniker. Honourable mention to a few prominent appearances that I was not able to find any information on other than cover art: The Wolf Man by Dell Comics, Flintstones #33 (1966), Monster Madness, Crazy #5, and Dracula Meets The Wolf Man.

Neil Gaiman's: Only The End OF The World Again

The only book on this list to star the OG Wolf Man himself Lawrence Talbot. This story is written by Gaiman, and features The Wolf Man attempting to stop the Elder Gods.

There are two instances of The Wolf Man making an appearance in Scooby Doo Comics. The earlier 1970 appearance transpports the gang into a Universal horror film, complete with the requisite castle and fortuneteller. As soon as they arrive at “Grimstone Castle” the gang is greeted by: Dracula, Frankenstein's Monster, and of course The Wolf Man. But alas as is common in Scooby Doo it is all a huge hoax, even the fortuneteller is a but another miscreant attempting to steal buried treasure.

The 1997 issue is written by current Marvel Comics writer Dan Slott, and involves the group attending a movie marathon that bares more than a few similarities with Universal Horror movies. A panel features a movie poster for the fictitious The Return OF The Monster Hunter that boasts such groan inducing jokes as “Directed By: Alphie Hitchplot”, “Karlos Boroff as the Monster”, and “Effects By: Roy Horrorhausman”. It turns out the film's poster is a reference to a recently uncovered movie starring Fred's Grandfather, and all of the films stars are out to get their hands on the rare film reel. During the showing of the film someone steals the film reels, and it's up to the duo to find out who made off with the artificat. All of the monsters from the movie appear to be in real world, including the films titular Wolf Man all of which, in true Scooby Doo fashion, turn out to be the film's special effects co-coordinator and projectionist.

A single panel of this issue of classic Sabrina The Teenage Witch involves a witch conjuring up “Three Boys” for Sabrina. The three beaus the witch conjurs up turn out to be three Universal Horror creatures. A particularly fat Dracula, Frankenstein's Monster in a Letterjacket, and The Wolf Man. It was actually a “pin-up” meant to be torn out and put on your wall...which I hope happened at  some point.

An entire series written by The Walking Dead creator Robert Kirkman that uses the name “Wolf-Man” to invoke classic superhero comics. It even has a Spider-Manesque hyphen. A fun take on the superhero genre, with a horror twist.

This is yet another single panel appearance of The Wolf Man (although never named, his appearance coincides with other Universal Monsters so his identity can be surmised.), and despite the book being more of a serious Anthology horror series, this appearance leans heavily on the comedic. The story begins with a woman having coffee with a potential suitor. She kindly works on letting him down, as in her mind she is cursed. In a series of one off panels we see her dictate all of the times her suitors met tragic ends. First one was a Vampire, the next a Wolf Man, then a poor archaeologist slain by the Mummy, and finally an unlucky botanist who is killed by The Gill Man. It is pretty amusing, and the final panel reveals her suitor to be none other than Dr. Frankenstein himself, looking to create his creature a Bride.