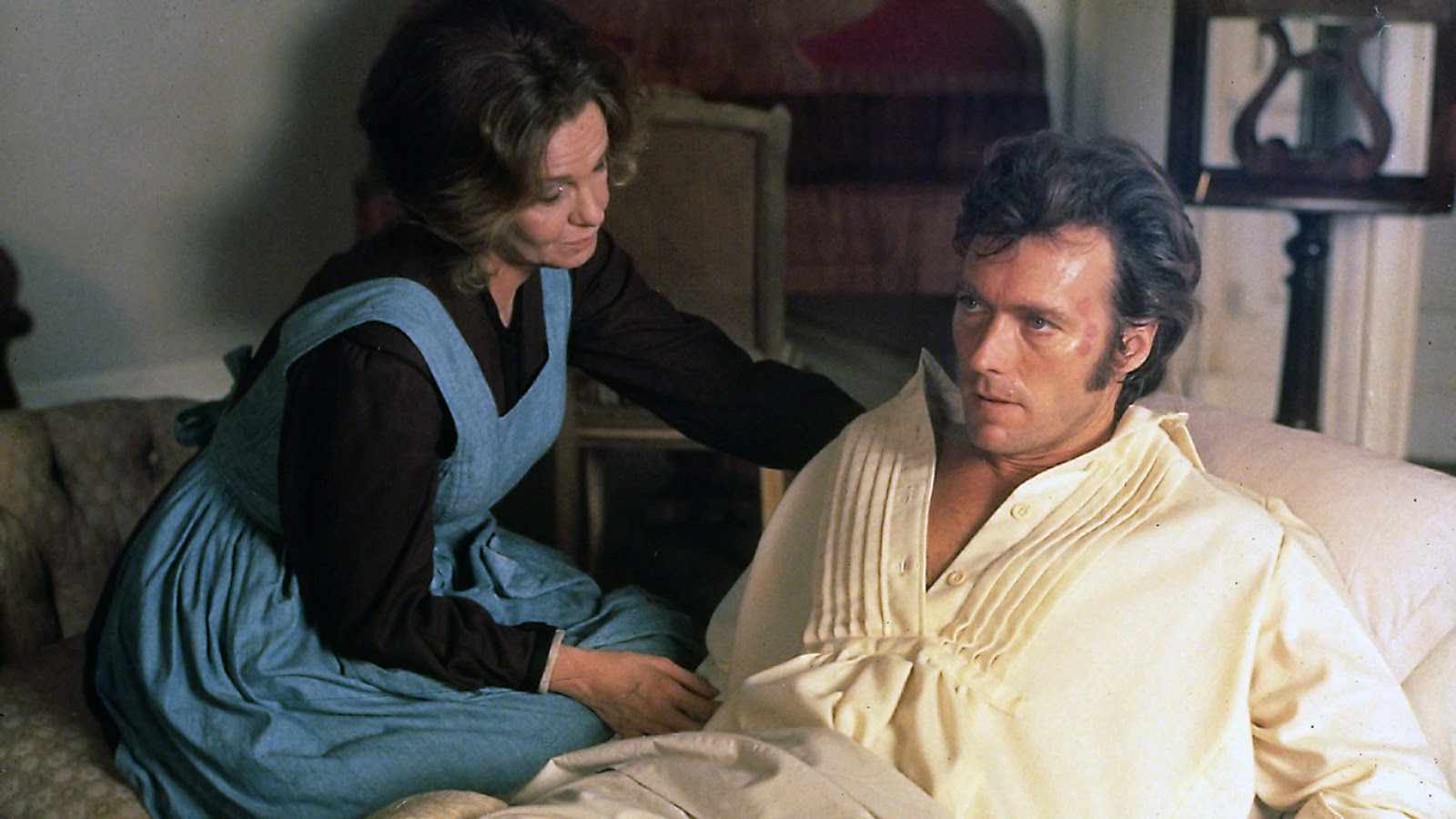 When it comes to watching either version of The Beguiled, whether it is Don Siegel’s adaptation from 1971 or Sophia Coppola’s vision of the novel, I recommend having few expectations. Neither are clear-cut examples of the horror genre, which infuriates many – even in an era where discussions of post-horror are beginning to emerge. Coppola’s is confidentially an esoteric, sexual gothic romance, and Siegel’s is bizarrely reminiscent of Peckinpah’s Straw Dogs, oozing with brash existentialism.

While there are multiple ways to unpack each director’s vision, one element in particular, sight, is the technique Siegel and Coppola use to build horror. Instead of “the gaze” or “framing,” I chose sight, a neutral term, because watching The Beguiled as an objective third party is crucial to understanding the characters. And it is what makes The Beguiled(s) unique and horrifying, even if you have seen one and are afraid the other will not pack the same punch.

Rather than recommending one film over the other, I simply want to outline why they are worthy inclusions in the horror cannon. If we are to weigh positives and negatives, the examples I have included are scenes that I believe one film does better than the other; they most succinctly build upon the idea of sight in horror. However, if you have seen neither film, be prepared for spoilers.

When Edwina (Elizabeth Hartman) pushes Corporal John McBurney (Clint Eastwood) down the stairs, he suffers a compound fracture. In order to save his life since the leg may contract gangrene, Martha (Geraldine Page) suggests they amputate.

While an entire scene is focused on the removal of McBurney’s leg, Siegel chooses to frame most of the carnage out of sight. Placing the camera at a low angle, seated on the end of the operating (dinner) table, we only glimpse Martha’s surgical precision, and hear the crunch of bone as she saws through both fibula and tibia. The tightness of the frame draws every inch of sweat out on her forehead, as it does Edwina and their slave, Hallie (Mae Mercer). There is a palpable tension because Siegel frames reaction instead of action, leaving much of the gruesome work to the audiences’ imaginations. Neither the audience or McBurney are in control of how the scene is played out; our only option is to react, which is far scarier because we are refused a cut away to either alleviate tension or focus on a character (in this case an unconscious McBurney) who feels equally powerless.

It is an effective technique that Spielberg perfected in Jaws, but one that had been previously experimented with by auteurs such as Hitchcock (Psycho), Polanksi (Repulsion), and Franju (Les yeux sans visage). Coppola teases the technique with the line “Go to the smokehouse and get me the saw, now”; yet, it never fully grabs you with the squirming potency that Siegel’s does, and that is entirely framed by the film’s intentions. Whereas Siegel’s is an exercise in veiled misogyny, whereby we are meant to sympathize with McBurney’s plight (thus, the utter gruesome, cringe-worthiness of the scene), Coppola is far more interested in power as an addiction and its gratifying qualities; a flaw we frequently see her characters struggle with.

Siegel’s film is, arguably, a bit more neurotic; it delivers on a sensationalist basis for fans seeking an exploitative experience; still, it is controlled and refined when it needs to be.

Coppola’s adaptation of Thomas P. Cullinan’s novel (originally published as A Painted Devil) investigates the politics of power, whereby much time is dedicated towards showing how the women of the seminary slowly loose control of what remaining power they have. It is a time of oppression, and as the Civil War looms right outside the gates of Miss Farnsworth’s Seminary, the women inside try desperately to remain in power, even though their side (the Confederacy) is loosing the war. Without the slave character, Hallie, who present in Siegel’s adaptation, the women eye McBurney (Colin Farrell) with unrelenting fervor. As I noted in my review of The Beguiled, we as an audience are not meant to sympathize with the women, nor are we to sympathize with McBurney because he, too, prides himself on manipulative and destructive behaviors. This, perhaps, is crucial as to how Coppola establishes the visual horror in The Beguiled.

While all residents of the seminary (excluding Edwina) agree to murder McBurney, it is Martha (Nicole Kidman) – the head mistress – who proceeds without reservation. As the figurehead of both of the film and the school for girls, she is logically posited as the hero. Concurrently, Coppola spends a great deal of time showing how Martha justifies keeping McBurney at the seminary instead of turning him over to the Confederacy because it is the “Christian” way to help those in need. It is why she, too, removes his leg: he would be suffering if he had to endure the pain of gangrene. She is a woman of upstanding morals. Thus, she justifies that in order to keep her girls safe, killing McBurney would not be a sin: in fact, because she is cooking him a gourmet meal – a nicety, perhaps – his death will be more pleasant (aka Christian) than by gun, hanging, or whatever the Confederacy would do to him.

Coppola’s The Beguiled is a fable of morality, one where the terror is shown through a character’s actions. It is the inverse of Siegel’s approach, as much of its characters served reactionary purposes, as events guided their behaviors, including the audiences’ ability to only identify with McBurney. There, tragedy continues to befall the Yankee, and Siegal makes evident that he has been brought to a house of horrors where he has little agency. Coppola writes each character as unidentifiable, leaving the audience in a position of complete helplessness, because we are most unwelcome visitors who can objectively spot Martha’s delusions and McBurney’s twisted fantasies.

Kidman’s delivery of the verdict is chilling; she silently mulls every option before systematically laying out the process by which McBurney will die; it is her recipe for death. And, visually, Coppola raises the stakes in each scene while the women’s morals continue to disintegrate, showing how themes of lust, betrayal, and suspicion lead to Martha’s psychotic break. The women’s desperate grabs for power are continually marred by their decisions to sacrifice more of their humanity to taste what they once had pre-war. The film is carried by atmosphere and psychological intrigue, owing much to its exclusion of on-screen violence, which would have been more à la torture porn.

While Coppola’s vision may not be for some (or many), it is unique for its character-driven terror arcs (especially Kidman’s climatic decision), where horror is established by beats instead of, well…literal beatings. The Beguiled is a film that targets the privileged, the atrocities they commit, and the drastic measures they take to retain said power.

Horror does come in many forms, and that is the beauty of the genre. It is largely indefinable as a whole, and with The Beguiled, it is clear that no two films – even with the same story – are ever going to be shown the same. I highly recommend watching both versions of The Beguiled and deciding for yourself which is more effective as a horror film, especially when it comes to the turtle scene.