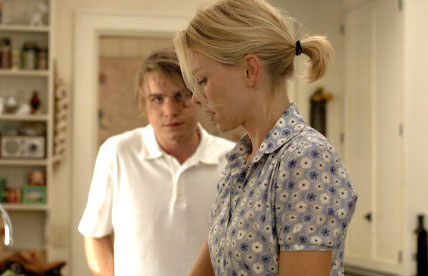 The Horror of March

March 14th brings two very interesting releases for horror fans. First up on the block is Neil Marshall's post-apocalyptic sci-fi/horror flick "Doomsday". If Marshall's name is familiar, it should be. He found his way onto American horror fan's radars around 2003, when we finally got a look (via DVD) at his werewolf/military film "Dog Soldiers". Not one to rest on his laurels, Marshall put his nose back to the grindstone and in 2005, hit both British and American shores theatrically with "The Descent". The film, which centers on a group of female adventurers who get lost spelunking and stumble upon a bloodthirsty subterranean race, quickly became another favorite of the horror community.

It performed less favorably with mainstream audiences, mainly due to exhaustion on the theme, and possible confusion, because of a similar film released that year titled "The Cave". Despite this, "The Descent" managed to make it's budget back a few times over, and won Marshall enough good will to allow him to increase his scope.

And that's just what he has done. IMDB describes "Doomsday" as "A futuristic action thriller where a team of people work to prevent a disaster threatening the future of the human race." The Trailer, which popped up a few weeks back, seems to promise something along the lines of a hybrid between "28 Weeks Later" and "Mad Maxx". Admittedly, it took me aback when I first saw it, mainly because it was different than what I had expected. At this point though, Marshall has earned more than enough good will with me as a horror fan to ensure my butt will be in the seat on opening night.

The other release on that date is another high-profile one, the remake of the Dutch film from 1997 "Funny Games" (Review). The original film centers on two home intruders, and watching them carry out ghastly deeds on the unfortunate homeowners. In the original, the invaders break the fourth wall, and at several points in the film actually point out that the audience is complicit in the crimes.

The American remake is being directed by Michael Haneke, director of the original, and is claimed to be a shot-for-shot remake of the original. Talk about confidence in your film! The fairly well known cast is headed by Naomi Watts, whose tear-stained face has already adorned most of the promotional materials. I don't have any real thoughts either way on this film, but you can watch the trailer and decide for yourself.

The final noteworthy release in March is "Shutter" (Trailer), a remake of a Thai film from a few years back. The story goes like this, and tell me if you've heard this before... "A newly married couple discovers disturbing, ghostly images in photographs they develop after a tragic accident. Fearing the manifestations may be connected, they investigate and learn that some mysteries are better left unsolved."

You thought reading that was boring? Just wait until I actually have to sit through it for you people. "Shutter", starring Joshua Jackson, also holds the distinction of being the most costly rights to a foreign film ever purchased by a domestic studio. I don't want to kick Asian horror while it's down here, but I have a feeling this one isn't going to end well.

Finally, keep your eyes open for the DVD of Frank Darabont's "The Mist" (Review), coming to DVD on March 25th. The film will arrive in both a basic and super duper special edition.

So that's it folks. We've got at least the potential for 2 good releases in March, and who knows, maybe "Shutter" will turn out to not be half bad. At least the genre is showing some signs of life this month. If I left anything out, or you have your own thoughts on these releases, feel free to leave them in the comments.