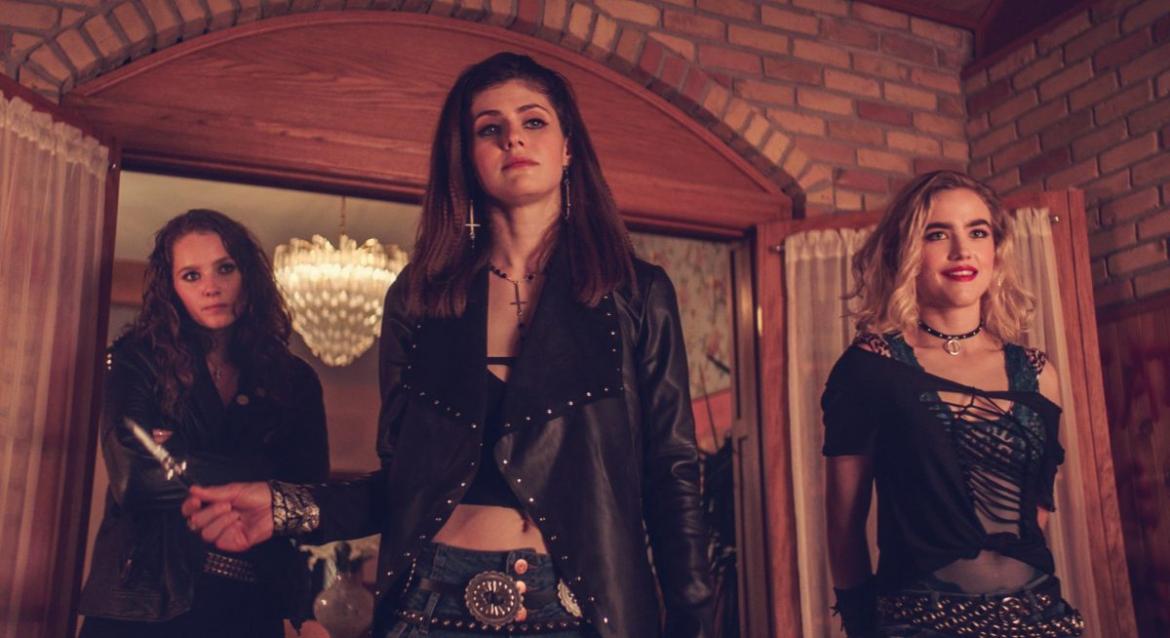 We Summon the Darkness (Movie Review)

Set in the late 1980s, We Summon the Darkness portrays a midwestern town that both fears an unseen evil while a raucous, thrilling subculture embraces it. It’s not an easy task to create an experience that both dramatizes and illustrates horror all while underlining a sense of dark humor and frenetic mayhem. In that regard, We Summon the Darkness is an unabashed success.

Alexis (Alexandria Daddario), Val (Maddie Hasson) and Bev (Amy Forsyth) are on their way to a heavy metal concert. Along the way, the trio meet three boys, Mark (Keean Johnson), Kovacs (Logan Miller) and Ivan (Austin Swift). They have the time of their lives, but suddenly things turn dark. What follows is a tribute to metal and a recollection of a time when people actually believed Satan and his worshippers were disemboweling children in forests across the Midwest.

For its best efforts, this celebratory nostalgia is the motivating project behind We Summon the Darkness. The film puts some extra energy into certain plot reveals one could almost read as a twist if it were not apparent for its setup. But that doesn’t really make or break this film. Nor does the fact that you’ll find yourself thinking about a thousand other films with the same type of payoff. At least not if you are able to get swept up in some really fun performances, immersed in a blood-soaked romp and dark wry humor. This show belongs to the lead female trio. Their chemistry and charisma keeps the film buoyant even when it starts to flounder.

If it was just that, the film would stand alone fine on its own terms. However, when We Summon the Darkness attempts to formulate a deeper message about the impacts of religion, faith and implied hypocrisy the film feels incredibly on the nose and leaves the viewer with a wish that something else a little campier and outrageous took charge. It’s difficult to fault the film’s ambitious pursuits, but when juxtaposed with the qualities of the film that clearly bring it to life one can’t help but see how light the subtext is.

Despite these missteps, We Summon the Darkness, comes through with strong performances from its leads and a well crafted sense of humor. If you like to view your films with one hand clutched in the devil’s horns and the other playing an air guitar then there is a lot to recommend here.