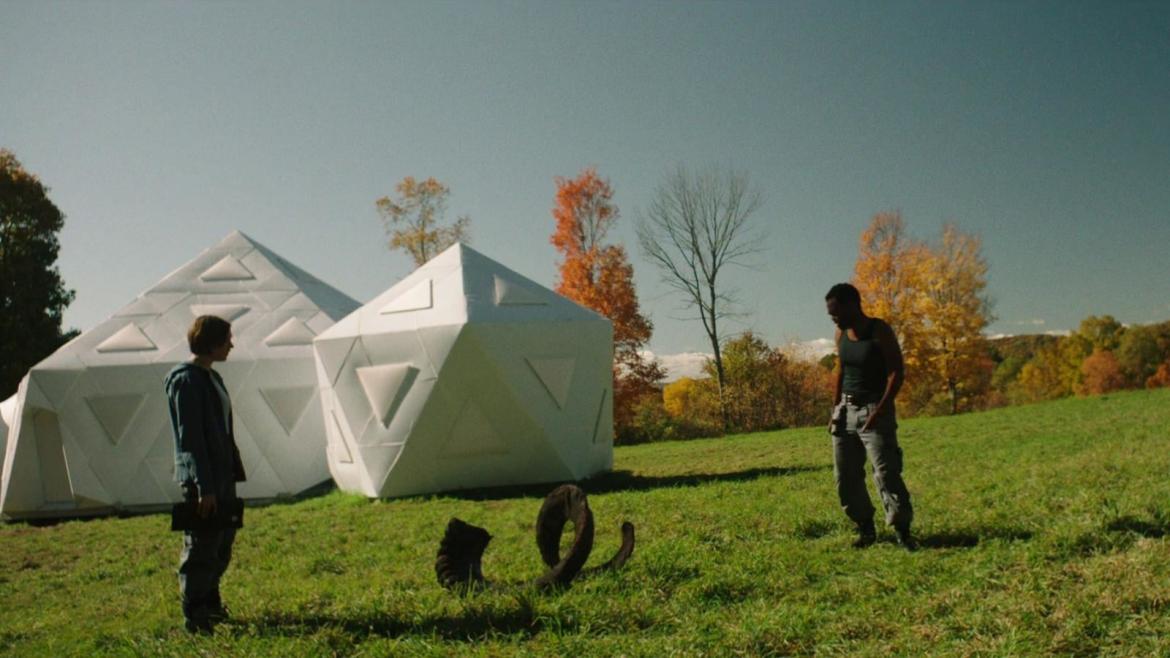 The ambiguous thriller is a staple within the genre and a friend to all indie filmmakers. There is no need for inflated budgets, just an intriguing idea and a cast to pull it off. They Remain certainly has a cast of two more than capable of pulling off its lean intentions and intriguing concept, but the film wastes both with its meandering pace and lack of a satisfying or coherent climax.

Based on the Laird Barron novella "--30--" They Remain follows a pair of researchers led by Keith (William Jackson Harper aka Chidi of NBC's The Good Place) as he and Jessica (Rebecca Henderson) survey a stretch of land purchased by an ominous corporate entity. The land was previously occupied by a dispersed religious cult and the researchers are tasked with documenting the subsequent lack of animal activity in the area. However, the mission hits a snag as the mental state of the scientists, who share a mysterious romantic history, begins to decline and their trust in one another dissolves.

The weakness in Philip Gelatt's film resides with long stretches of almost nothing happening, when time could be spent developing the strained dynamic between the only two (credited) characters. The scenes of Henderson and Harper trading barbs and intellectual prowess are the highlights and yet so much time is spent with static shots of Keith staring off into the wilderness or at footage of said wilderness. The ominous creep factor of the quiet rustling of the breeze through leaves and no wildlife white noise is undeniable, yet it wears thin and becomes clear at times that that's about all the film is clinging to when attempting to building suspense.

The performances of the leads are both solid, though Henderson often comes across a little robotic in her delivery of her scientific observations and theories-which could easily be intentional. The problem being that considering the cast is so sparse, there isn't nearly enough done to develop their rapport. Vague hints at their past are undercut by trippy yet seemingly incomprehensible stretches of pretentious often hypnotic imagery which adds to the disorienting nature of the film as a whole.

The filmmaking pedigree is not in question. Using purposeful camera shots to make the best use of lighting which goes to show how skillful Gelatt is behind the camera. The perceived weakness here is that the endgame is in question in spite of how competent each individual piece in this particular chess match is placed, which in the end, feels a bit like a stalemate.

They Remain looks fantastic but fails to leverage a considerable chunk of its haunting setup into anything that manifests significantly on-screen. The scale is tipped heavily on the ambiguous side even for an indie jaunt this low budget, and ultimately it doesn't feel like Gelatt nor the Barron source material have much to say cinematically.