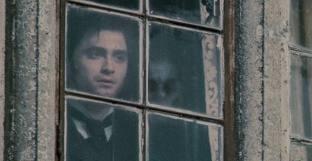 The Woman In Black (Movie Review)

“The Woman in Black,” starring Daniel Radcliffe, is a film that relies upon atmosphere. It practically oozes it, from the beginning scenes of Victorian London (dank, sorrowful, and dirty) to the dilapidated haunted manor that takes up much of the film’s setting. Unfortunately, atmosphere alone can’t carry a film, and in the end “The Woman in Black” is a good movie but I wouldn’t go so far as to call it great.

Radcliffe plays Arthur Kepps, a young attorney whose wife passed away a few years earlier in childbirth. He’s raising his son alone now (well, he has help from a very fetching nanny who doesn’t speak much), and battling what appears to be a very deep depression. When we first see him he’s holding a straight razor against his throat a little longer than he needs to. He is failing at work, and his firm sends him to a remote English village named Cryphin Gifford to review documentation at the Eel Marsh House. It seems the lady of the house recently died and there are some issues with her will.

I know, I know, nothing says horror like reviewing probate documentation. But Kepps leaves for the village and along the way meets Mr. Daily (played by Ciarán Hinds), a resident of Cryphin Gifford and perhaps the only sensible person left there. Everyone else seems gripped by fear and wants nothing to do with Kepps and his work. These first scenes of the village are reminiscent of “Dracula,” where the townsfolk know there is an ancient evil just waiting to burst out.

Of course, it’s not long before Kepps goes to Eel Marsh House, and the tension grows. The house itself is a perfect example of what a haunted house should be—old and decaying, separated from the village, sitting alone in the middle of a muddy marsh. It’s here that Kepps learns more about the woman, and why the village hates her so. It’s a story of insanity and murdered children, and it’s a pretty good tale.

Huge chunks of the rest of the movie take place at Eel Marsh, but while the first few scenes there provide some decent scares, they get old fast. The producers went to the “let’s have Radcliffe wander the halls in the dark with a candle in one hand and an axe in the other” well just a few times too many. This is not a criticism of Radcliffe, however, who does an admirable job (especially considering how much of the film is just him wordlessly reacting to letters or inspecting random noises in the house).

The pace picks up again when Kepps returns to the village, although the moody atmosphere never changes. Children die, villagers become more violent towards him, and Kepps and Daily try to solve the mystery surrounding the ghost. It doesn’t take time to realize that this is one very dour movie. The film’s only attempt at humor involve Daily’s wife at a dinner table, although even that scene quickly turns grim. It’s unfortunate “The Woman in Black” didn’t try its hand at a little more of this sarcastic humor.

I would be remiss if I didn’t mention the ending. Although getting there was a bit of a chore, I loved the ending to “The Woman in Black.” It went against convention and gave an ending that wasn’t just a jump scare and preview to a sequel, but gave suitable closure to the film.

Lady in the Water