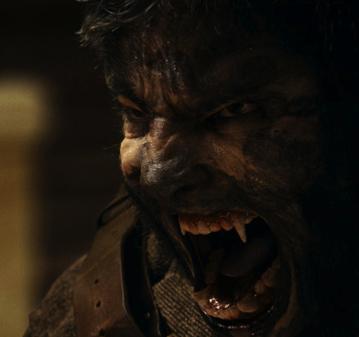 In much of historic Europe, wolves were the last remaining natural predator of man. By the 20th century however, knowledge and weaponry helped to systematically eliminate this threat. The fear of wolves would not subside so easily, as is clearly evidenced in the opening scenes of "The Wolfman," the first of Universal's old-school horror properties to come in for the high-gloss remake treatment.

In 1891 the village of Blackmoor in rural England has been beset by a new predator: one that has dispatched -- in gruesome fashion -- three men. Superstition, fueled in no small part by the traveling gypsies who happen to be camping nearby, drives the imaginations of the townsfolk to all manner of evils. It's not long though, before the spell is broken and the real culprit is revealed. "The Wolfman," a thriller cum action film swaddled in the rags of horror, never concerns itself with creating any level of tension. Instead, the film goes for the throat with cartoonish, over-the-top violence and gore that explodes forth with each full moon.

Lawrence Talbot (Benicio Del Toro), upon hearing of his brother's grisly murder, returns home to his family's massive, country estate. There his would-be sister-in-law Gwen (Emily Blunt) and his estranged father Sir John (Anthony Hopkins) are facing their grief in different ways. John -- ever the distant, cold father -- soldiers on is his rotting castle. Gwen sets about collecting her life so that she may return to London. Lawrence meanwhile seeks justice for a brother he once loved, but with whom he had fallen long out of touch. This mission puts him on a collision course with the beast.

It was central to the film's marketing, and therefore not a spoiler, that Del Toro becomes the titular werewolf. Thus it should come as little surprise that his encounter with the beast concludes "Wolfman's" first act. By this point the film's director, Joe Johnston, has deployed several disembowelings, a handful of delimbings, and at least one beheading. This extreme level of gore and violence, combined with the well executed period scenery, lends the film a B-movie feel. It's schizophrenic though -- like "Wolfman's" title character -- asking both to be savored as cinema and slurped-up as genre-based titillation.

This dual personality may have won the day, had the script and director supported it more evenly. Instead, though the film vacillates between finely-acted dramatic sequences, keenly shot atmospherics and full-bore comic-book level action. The aforementioned lack of tension, undercut almost entirely in the scripting, removes much of the film's potential vigor. What's left, while pretty to look at and at times exciting to watch, is never really engaging. The real shame is that such a high-level of effects and photography talent would be wasted on something that ultimately falls so flaccid.

A lunar cycle takes roughly 29 and a half days -- and as such, it's an odd cadence around which to set a film. Werewolf movies, if they want to play by the strictest of mythological rules, must adhere to this drawn out schedule, so it's easy to see how such a film will face challenges right out of the gate. "The Wolfman" handles this about as well as one could hope, and without ever cheating. But mythical accuracy can only win you so many points. The same is true of lush design and B-movie violence and effects. Each of these victories, if deployed around a winning screenplay could add up to a hell of a horror film. What "Wolfman" morphs into though, while fun at times, is far less than the sum of its parts.