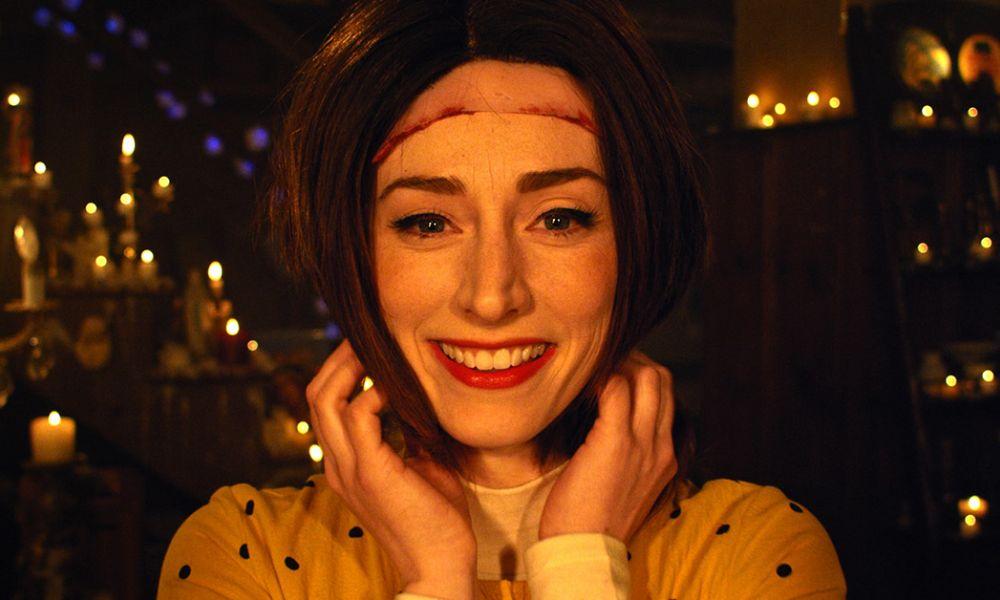 The bond between hair stylist and client is one I’ve never been able to grasp despite it’s long cultural history as a place for chit-chat and literal armchair psychology. Jill Gevargizian’s The Stylist, suggests that this relationship could have a deeper, potentially dangerous ripple effect where amiability gives way to fixation. The result is a film that delivers a tense and at times heartbreaking portrayal of longing and the search of one’s identity.

Expanding on Gevargizian’s short of the same name, The Stylist stars Najarra Townsend as Claire, an awkward and soft spoken Kansas City hair stylist. That’s what the world sees. But what the world doesn’t see is that Claire has a penchant for drugging select clients and lopping off their scalps as trophies she occasionally puts on in front of a mirror in her basement. One day we meet a regular client, a cheerfully oblivious Olivia (Brea Grant) who begs Claire to save her wedding by taking over hairdressing for the ceremony. Claire caves to Olivia’s request which sets in to motion a crash course in murder and obsession.

The Stylist is a movie of longing and sorrow that permeates the psyche, triggering sympathy for a character who is as much a villain as any of our genre’s beloved horror icons. Townsend’s performance as Claire evokes a powerful sense of vulnerability and self doubt. The desire for  human connection weighs heavily on her facial expressions and inspires empathy in the audience. Her murderous tendencies are almost impulsive, but it’s the subsequent act of wearing her victims ‘elegantly severed scalps that cements the seed of a fractured mind yearning for escape or searching for an identity by “trying on” her victims. Townsend as Claire feels incredibly focused and committed to Gevargizian’s material and her performance shines as a result. The emotions fueling Claire’s actions feel authentic and heartbreaking, making her a complicated character one can’t simply villainize outright despite her violent outbursts.

Gevargizian clearly trusts Townsend’s ability to sell this character as the script doesn’t over simplify or over characterize through dialogue. As a character study, the film thoroughly trusts that the audience will dig their claws in and engage with Claire every step of the way. Sure, there could be more meat on its bones to accentuate Claire’s past, motivations, and inner turmoil that much more, but this is a showcase for what can be done with a minimalist script and limited resources. It’s no small feat that Gevargizian and company have pulled off either. The film looks stunning even in its simplicity. The cinematography is atmospheric and feeds into the building tension while the eerie and chilling score hammers home how expertly crafted this film is on all levels to maximize its effectiveness.

The Stylist is an elegant crescendo of madness orchestrated by Jill Gevargizian who feels like a seasoned pro behind the camera despite this being her full length feature debut. If nothing else, this one may have you tipping your hairdresser a little extra a little extra from now on.

Screened as part of the 2020 Virtual Fantastic Fest.