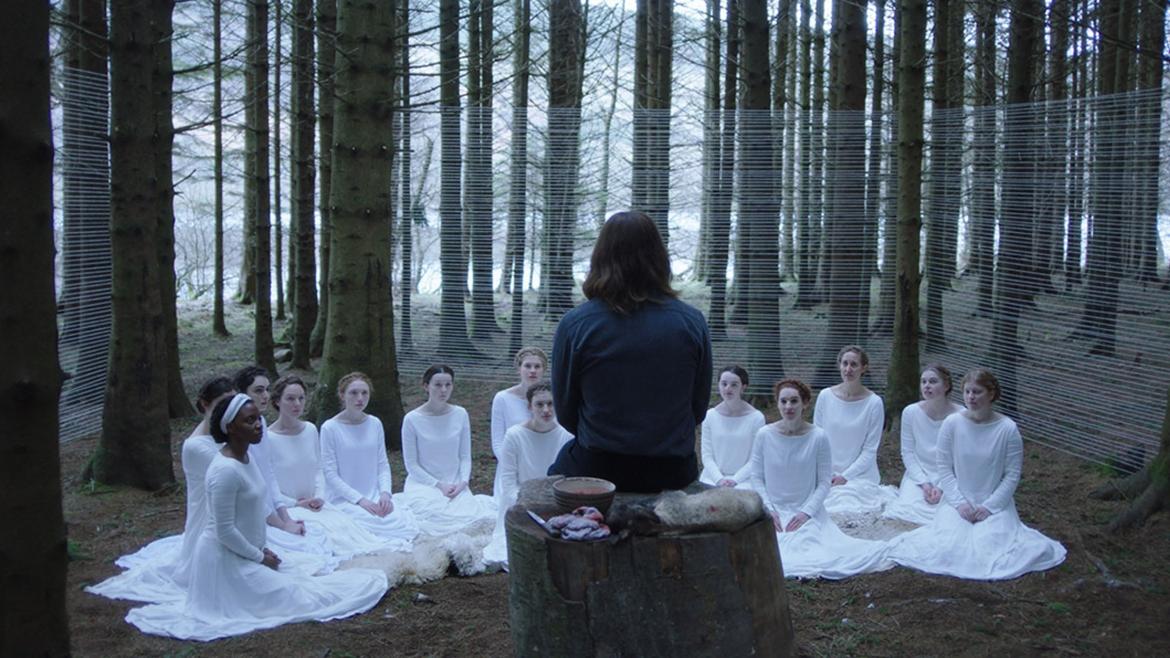 The Other Lamb (Movie Review)

If you’re a sucker for evocative poster art and storylines involving cults, then promotions for The Other Lamb have likely grabbed your attention in the last few months. When I first read about this movie in the programming schedule for the 2020 Panic Fest, I was immediately intrigued. The fact that the movie was written and directed by women (C.S. McMullen and Malgorzata Szumowska, respectively) assuaged any fears I may have had that a movie about a man leading a cult of young female followers might employ problematic tropes.

The film follows a teenage girl named Selah (Raffey Cassidy) who has grown up in a very repressive cult led by a messianic man who the all-female members refer to only as The Shepherd (Michiel Huisman). Slowly we learn that The Shepherd has Wives and Daughters. The Wives always wear red and exist higher up in the hierarchy of the women. The Daughters (who are the biological daughters of the Wives) wear blue and vary in age from young girls to young women who are in their teens. The Flock lives out in the woods and sustain themselves in part by tending a literal flock of sheep.The Shepherd picks a Wife each night at dinner to go to bed with him and, it seems, once the Daughters come of age, they will replace their mothers.

Selah is a pillar of belief. She is enamored with the Shepherd and it seems that the two are always watching one another. He tells her during an interaction that she is one of his most faithful followers. Everything changes when Selah is sent to supervise the birth of a new lamb and falls asleep, only to wake and find that the lamb is stillborn. When the Flock is forced to leave their home (presumably for squatting on land they don’t own) Selah’s doubts about her leader and her life begin to grow.

The Other Lamb is a beautiful film to look at. The hills and valleys of the Irish landscape that the collective traverses are absolutely breathtaking. The colors are vivid and the set design of their original encampment is striking. The Flock’s “Church” is a perfect square made of white thread wound between four different trees. This structure and staging in particular demonstrates a clear vision.

Unfortunately, the film’s slow burn never really speeds up, and it doesn’t feel like it really goes anywhere as it reaches its climax. Selah’s journey from pious follower to a young woman seeking her independence is pretty clear from the jump. The lack of any real relationship with the other women around her makes the film’s storyline feel hollow. When Selah and her sisters finally break free from The Shepherd, it happens off screen and we don’t see what becomes of them, whether they stick together or if they face their fates alone. The film’s finale is coupled with some rather harsh storytelling choices punctuated in a particularly gruesome moment. It’s a sequence that hopes to communicate something to us but it just feels cruel. The matter isn’t helped by the fact that the movie’s climax cribs more than a few visuals and symbols from the horror darling The Witch.

In the end, The Other Lamb does not deliver on the intrigue that it promises. But if you’re in the mood to look at some really beautiful settings and you don’t mind a man repeatedly, sometimes violently, sticking his fingers in women’s mouth, check it out.